George Merritt and the French Taste

George Merritt, the second owner of Lyndhurst, is largely responsible for the mansion that visitors experience today. After Merritt purchases Lyndhurst in 1863, he doubles the house in size, greatly expands the property holdings, and transforms the house from a comfortable villa to one of the most imposing mansions of the Hudson Valley.

Merritt does not change the architectural envelope of the Paulding parlor and it is likely that the volume and placement of furniture under the second owners roughly approximates that the first owners. However, with the Merritts, the overriding leitmotif if the decoration changes from a British to French influence. In keeping with the prevailing style of the Civil War era, the Merritt’s chose furniture that was “in the French taste.” Although these pieces are most likely made in America, (in case of the seat furniture, the pieces may have been manufactured by a French immigrant ebeniste) with curving lines, they reflect an American version of the French examples of Louis XV curving rococo lines. Additionally, the handsome woven wool carpet-as shown in period photographs- displays a pattern of bold repeating medallions which referenced French Aubusson carpets.

The Merritt parlor was still laid out in the manner that was similar to the layout under the Pauldings, with the extensive seating around the perimeter of the rooms, paraphernalia for the performance of music, restrained display of art and bric-a-brac, and no window treatments. The Merritts had a large parlor suite of eight side chairs, two armchairs, a sofa, and love seat. Additionally, there was a piano and a small grouping of music and other cabinets placed on the perimeter walls of the room with a marble-topped center table anchoring the middle of the room. The carved rosewood seat furniture is probably from the 1850s and predates the Merritt’s ownership of Lyndhurst. As was often the case, the family may have moved their slightly out of date city furniture up to their new country house. The seat furniture was possibly the work of Charles Baudoine or equivalent New York manufacturer working in the French style, of which there were many. 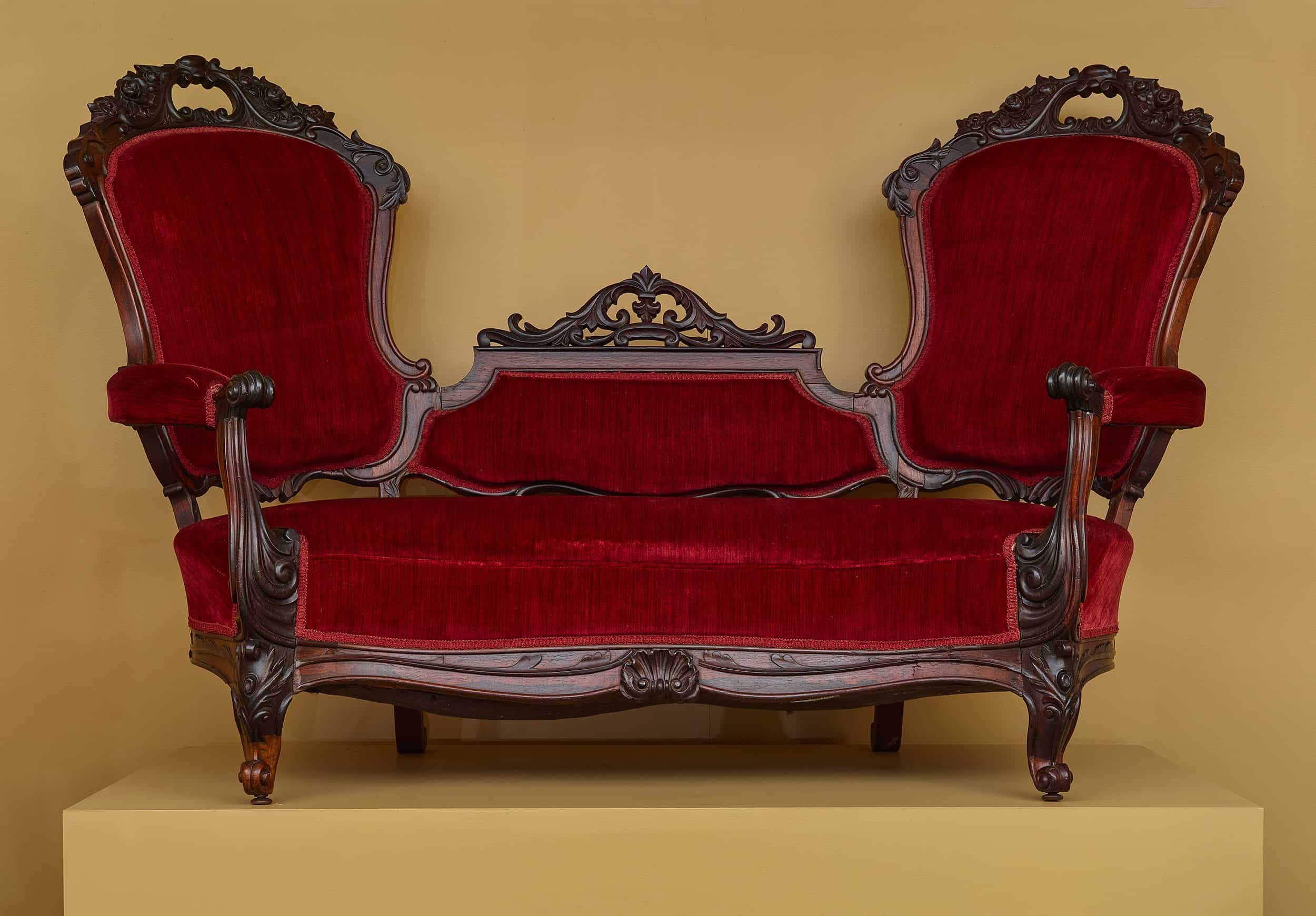 This extensive suite of seat furniture is typical of American parlor furnishings of the 1850s, when Rococo Revival furniture, considered to be in the latest “French taste” was highly popular. Although Lyndhurst was a full-time residence for the Merritt’s, rather than just a seasonal house, following the country house tradition, the parlor suite may have come to Lyndhurst from an earlier Merritt home. While the suite is not signed, it bears resemblance to similar pieces made by Charles Baudouine, a french cabinetmaker who moves to New York and was known for making furniture loosely in the Louis XV style. 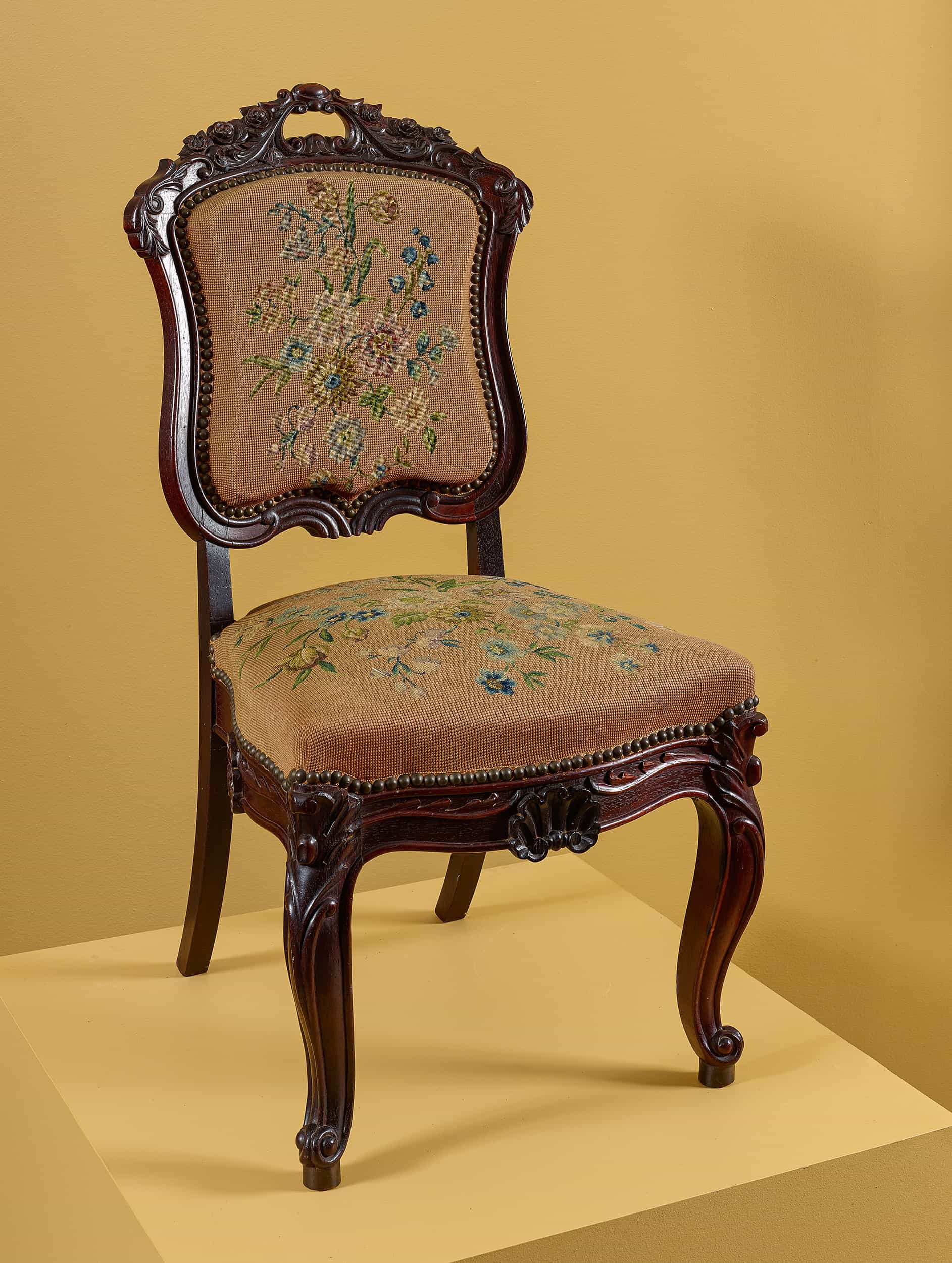 Originally comprising eight matching side chairs, two armchairs, a love seat, and a sofa
Possibly Charles Baudouine
Carved and upholstered rosewood
Some pieces marked C.W. PAT.
When Jay Gould purchases Lyndhurst and redecorates the parlor, he gives a number of pieces to his sister. Four of the eight side chairs stay at Lyndhurst and receive different upholsteries, depending on their room placement in the mansion and the chairs identified in the Lyndhurst photographs of the 1890s in various rooms of the house. 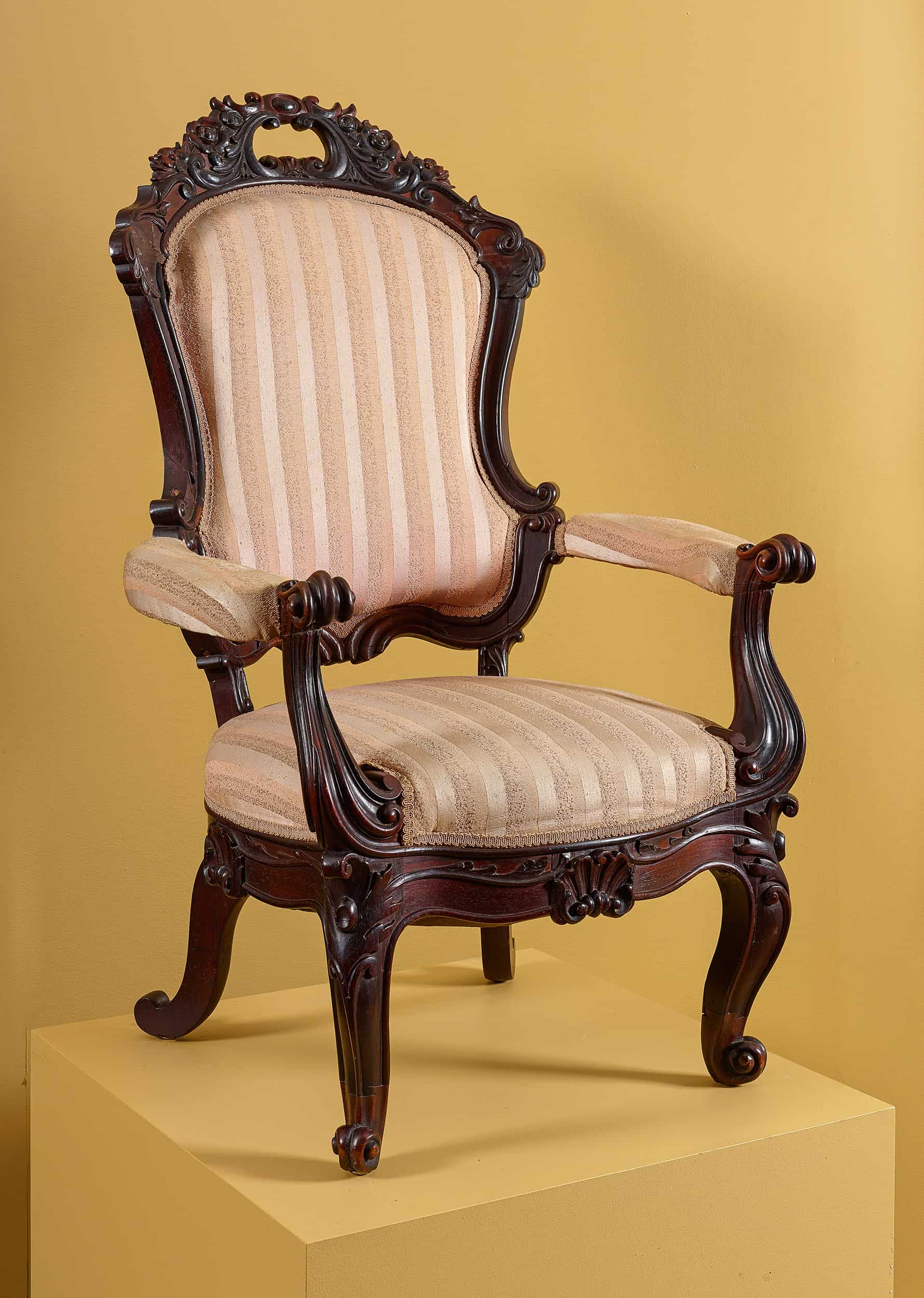 Originally comprising eight matching side chairs, two armchairs, a love seat, and a sofa
Possibly Charles Baudouine
Carved and upholstered rosewood
Some pieces marked C.W. PAT.
By the 1990s, descendants of Gould’s sister return the furniture to Lyndhurst, although the pieces have largely remained in storage since their return. As a result, this Rococo Revival suite bear a variety of upholsteries, including plain red victorian velvet on the loveseat, 20th-century floral needlepoint on four of the side chairs, and a peach moire stripe from the 1970s on an armchair (seen here).

Attributed to J. & J.W. Meeks
Rosewood, rosewood veneers, and marble
In addition to the rosewood seat furniture, George Merritt furnishes the Lyndhurst parlor with a number of other Rococo Revival pieces, often from J.& J.W. Meeks, then the largest furniture manufacturer in New York City. Notably, this piece is distinguished by both the reticulated carving that supports the marble top as well as a spindled basket centering the four legs at the table base. While such baskets are not extremely common on center tables, they do appear from time to time. 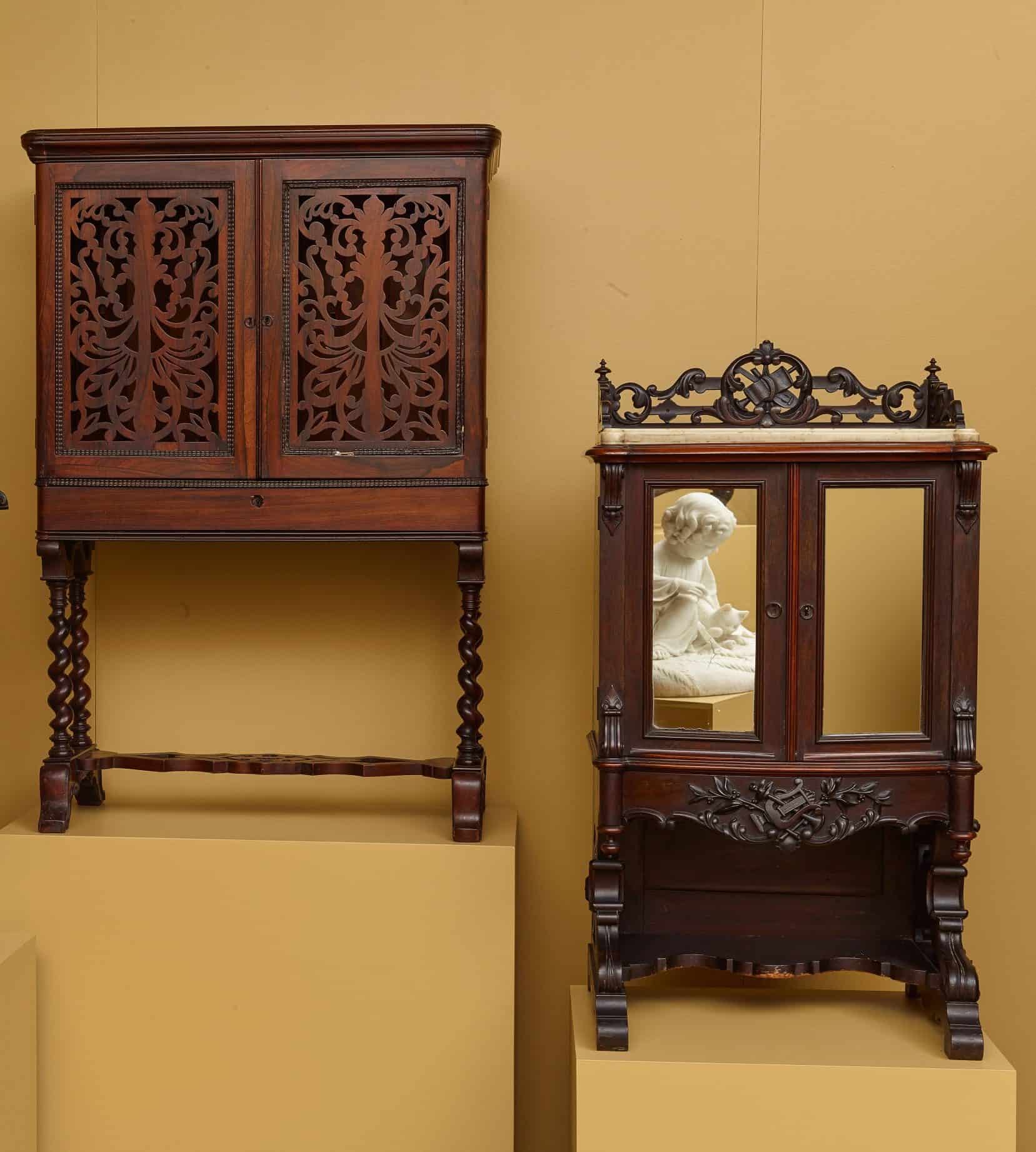 J & J.W. Meeks
Rosewood, rosewood veneer, marble, mirrored glass with satinwood and cloth interiors
Although the Merritts would turn their reception room into a music room, it is clear from the photographic record that the Merritt’s also used their parlor for musical entertainment. As they kept a piano and two music cabinets in the parlor. One if not both of these cabinets may be the ones seen in the 1870s photograph. There has been some question to whether the mirrored doors on the one cabinet were original as Merritt modifies a Meeks side table used in the parlor, but as the pieces’ delicate satinwood lining is preserved and is keeping in the way Meeks finished their furniture, it is clear the modifications were of the period. The second cabinet bears a stamped Meeks mark in the drawer and belonged to Cyrus Yale, who leased Lyndhurst from Philip Paulding prior to the Merritt’s purchase. It is believed he left the cabinet behind. 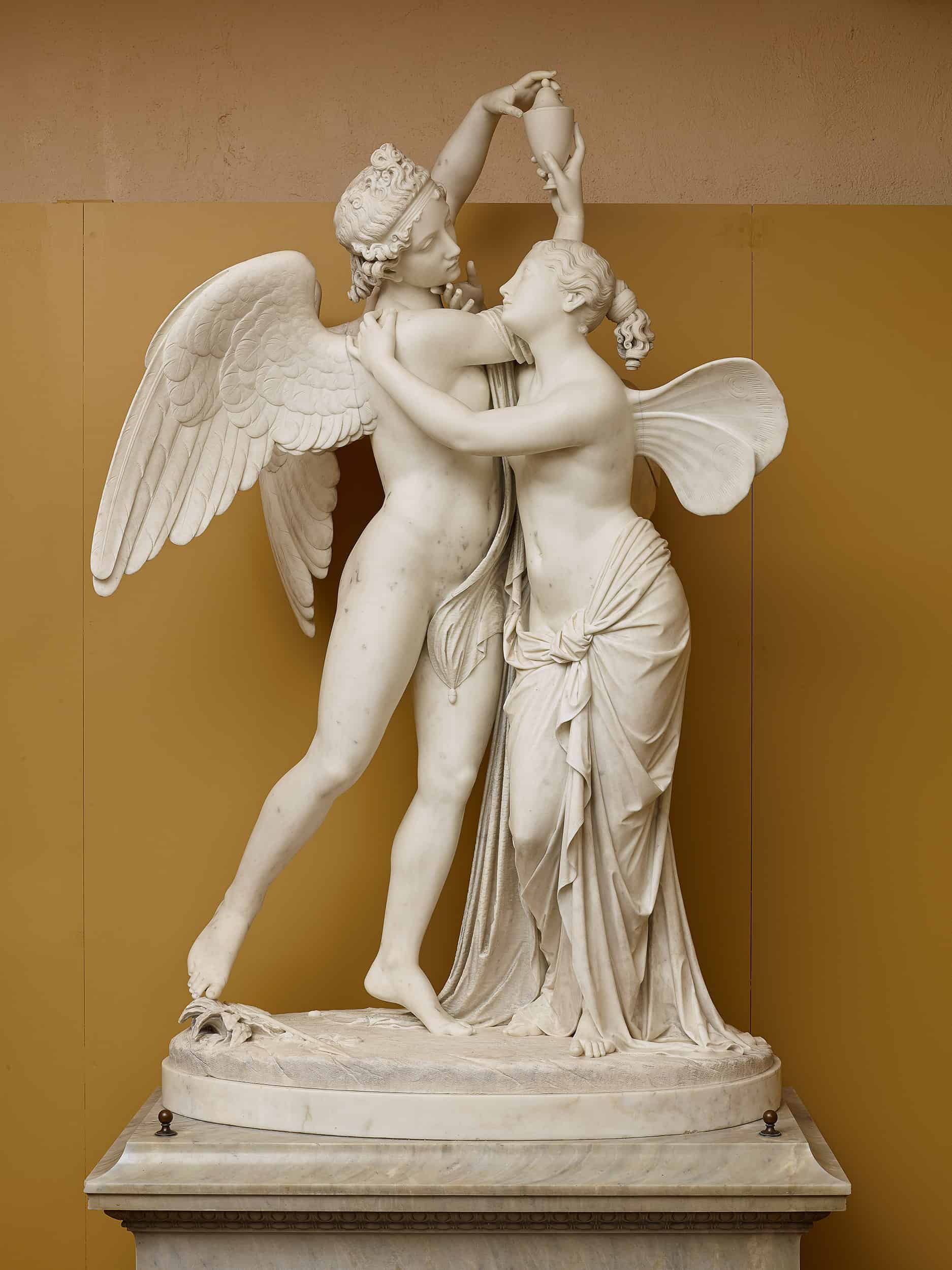 Giovanni Maria Benzoni
Italian (1809-1873)
Marble
Although not well known today, Benzoni was a fixture of the European grand tour, and his studio, filled with Neo-Classical sculptures in the style of Canova, was a regularly visited tourist attraction in19th century Rome. George Merritt first saw Cupid and Psyche at the Crystal Palace exhibition London and later bought it as a present for his wife, Julia. While Merritt’s painting collection left the house after his death in 1873, his sculptures remained at Lyndhurst. 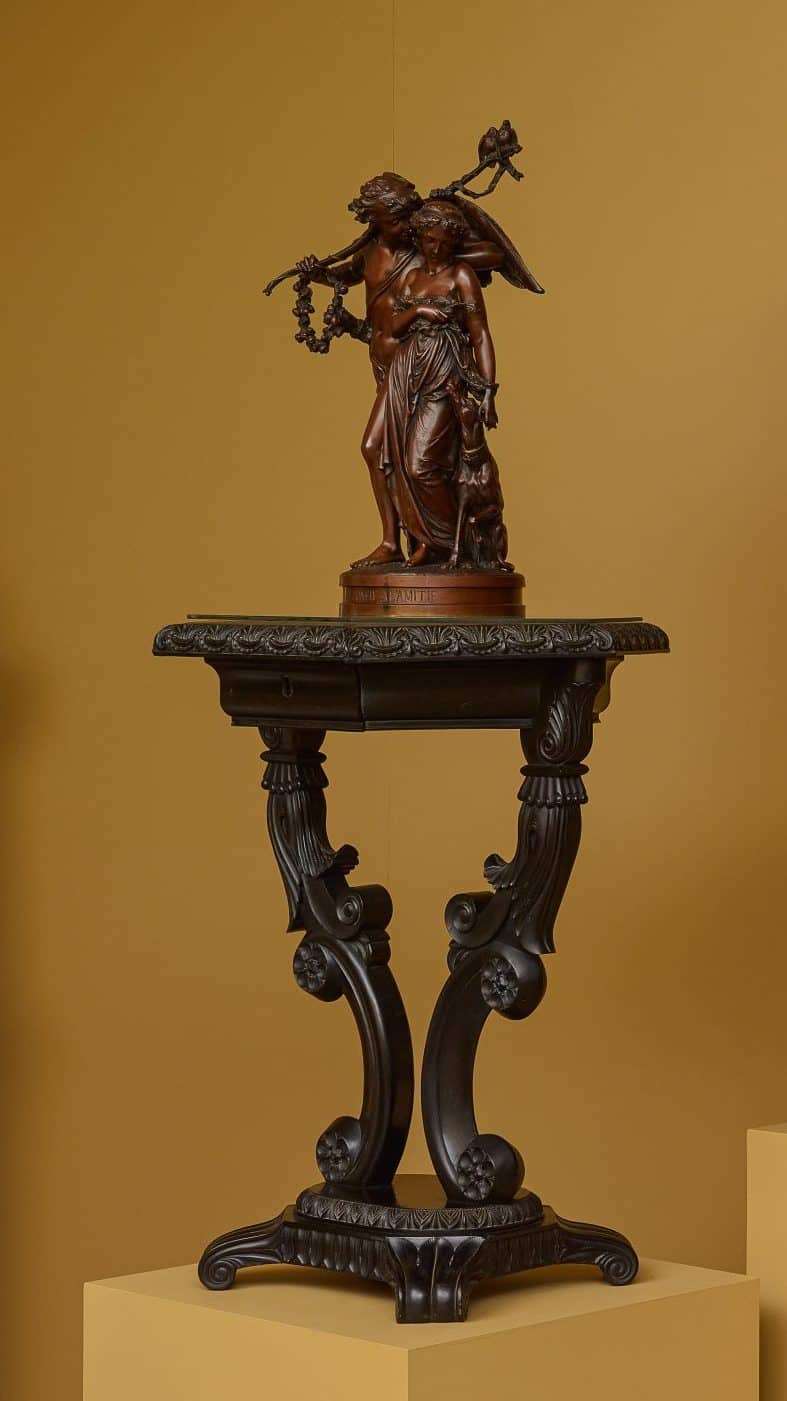 Anglo-Indian tables made from rare Asian woods were extremely popular in England during the 19th century. Merritt may have purchased this table on one of his visits to England and Europe. This table appears in the 1870 photograph of the Merritt parlor and was used in the same room during the 1880s when Jay Gould resided at Lyndhurst. The French bronze statue of lovers also appears and was one of the statues left behind. 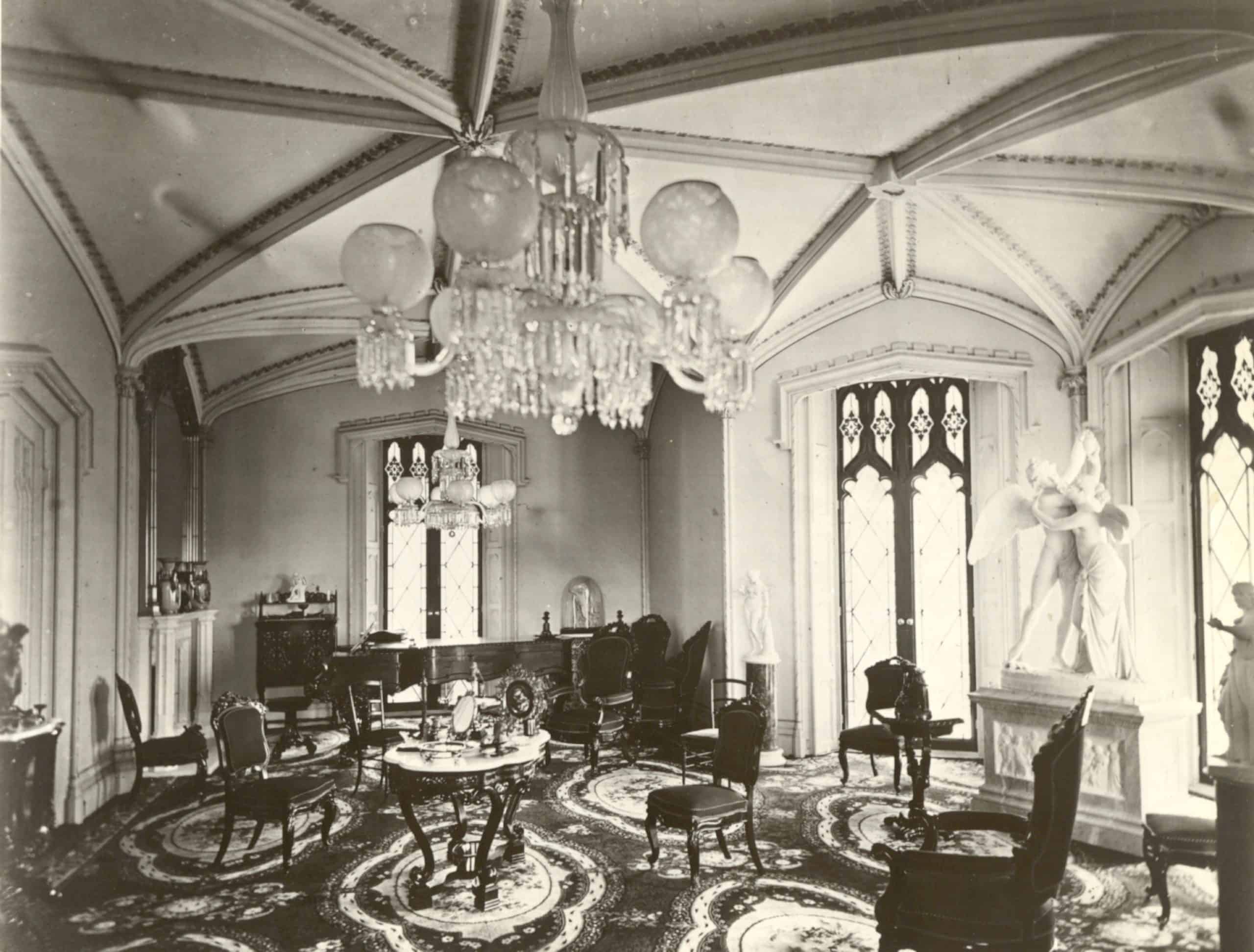 The header on this page shows the parlor circa 1870 looking west towards the Hudson and this reverse view shows the room facing east. See the statue of Cupid and Psyche, the Anglo-Indian hexagonal table in front of it, the two music cabinets on the far wall, and the wall to the left, the rococo revival furniture throughout, and other pieces currently found at Lyndhurst today.