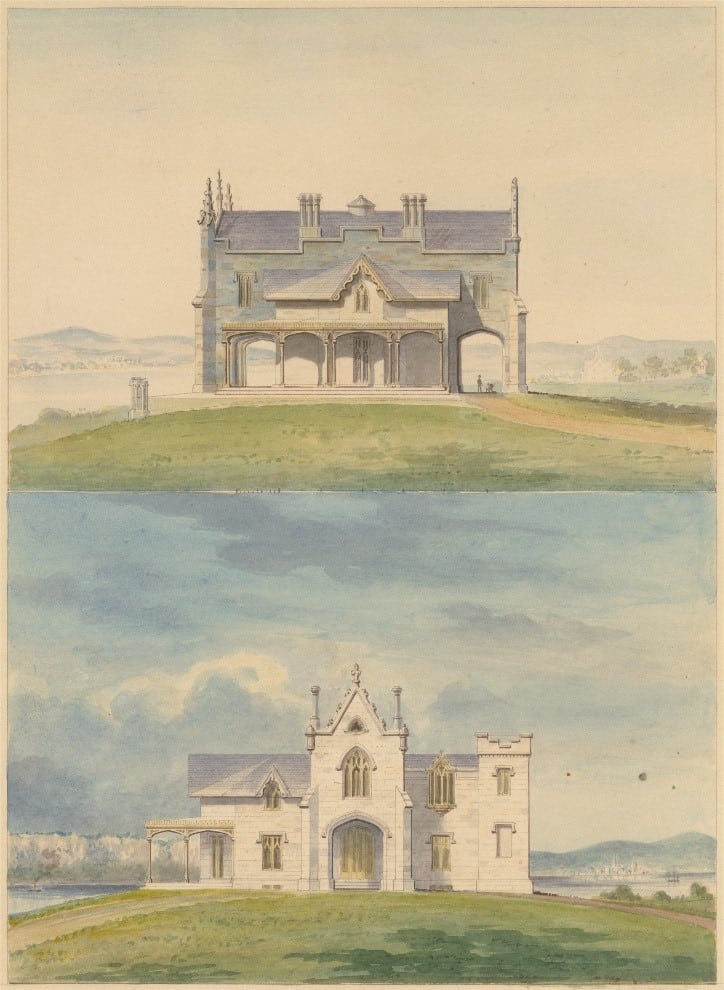 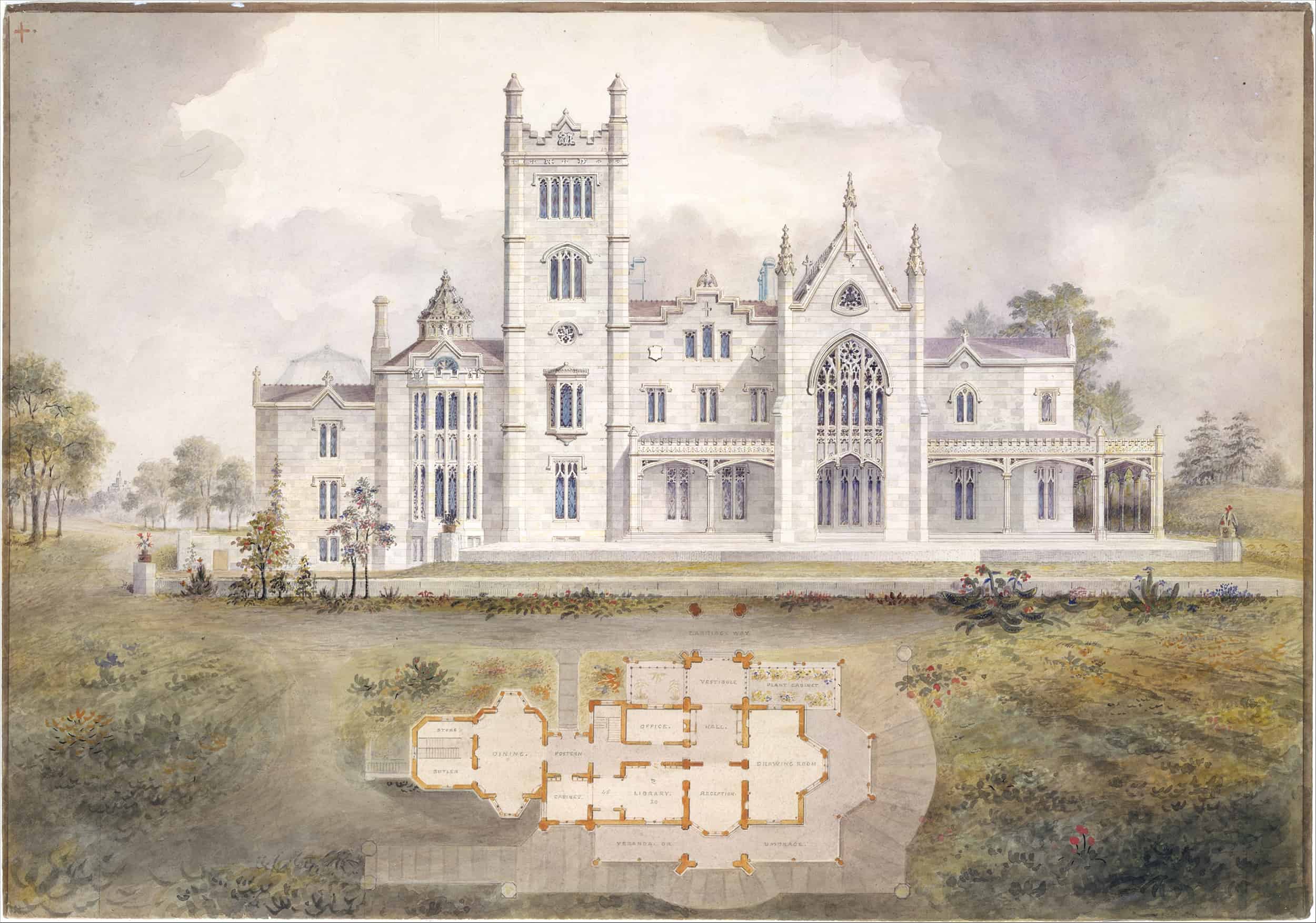 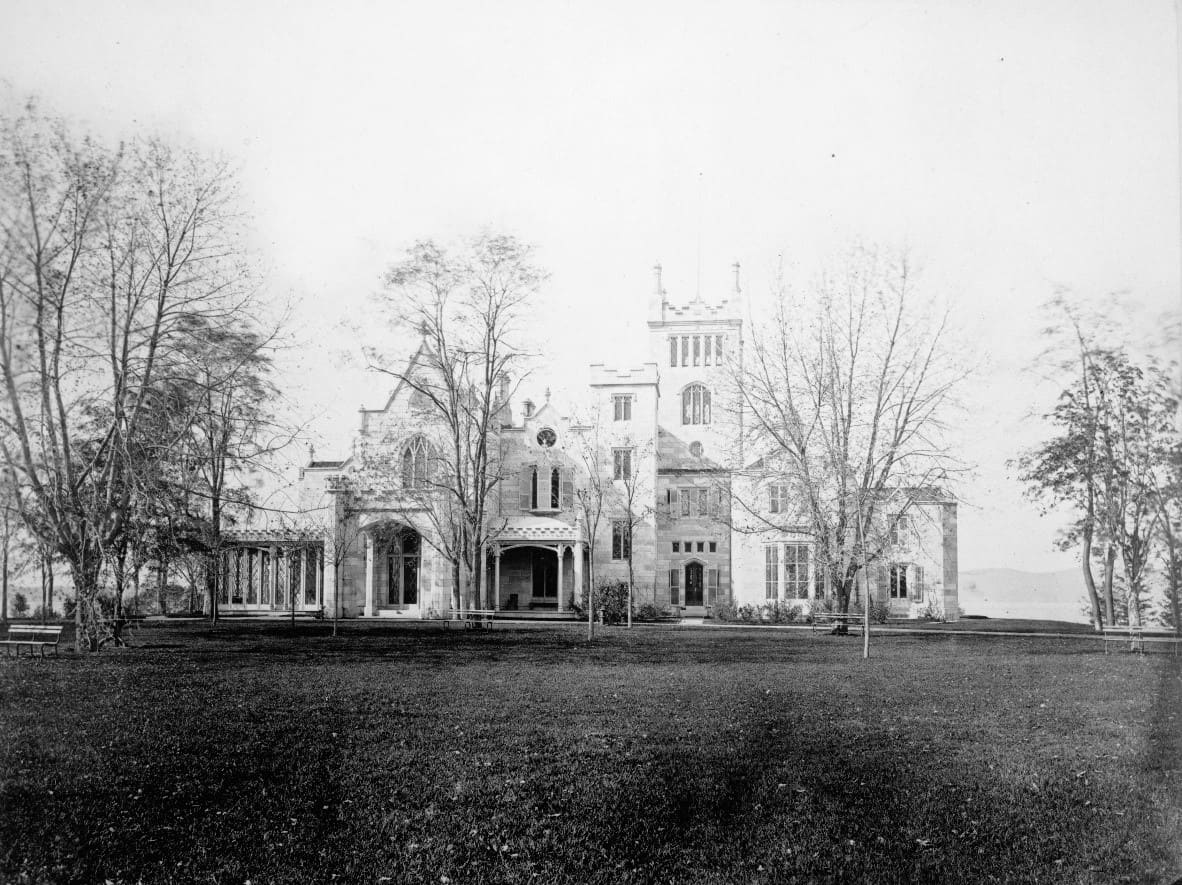 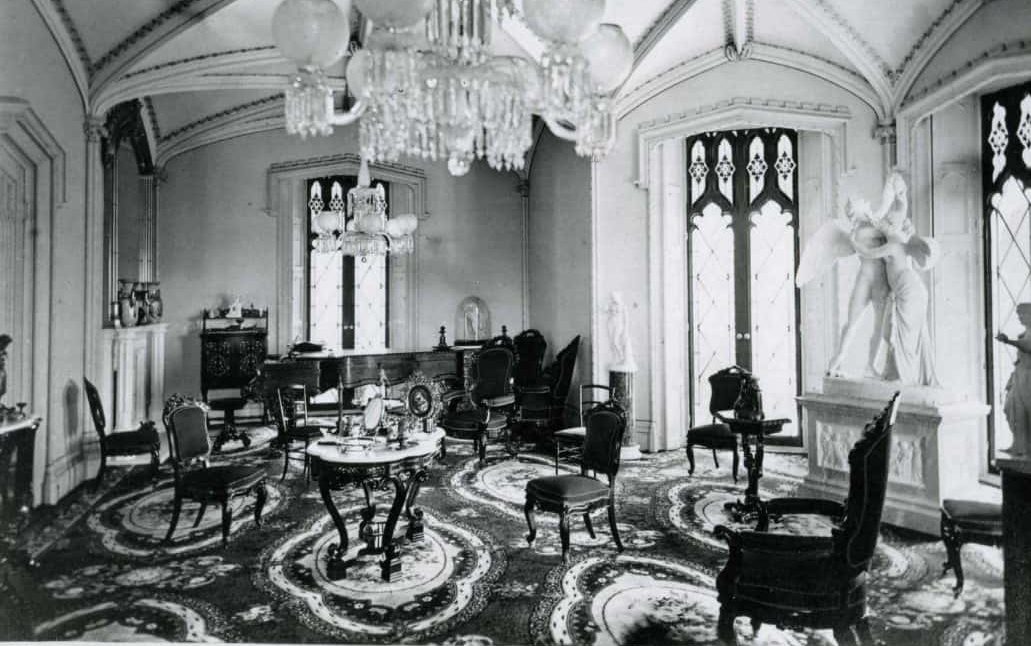 The mansion was designed in 1838 by architect Alexander Jackson Davis for William Paulding Jr. in a romantic Gothic Revival style. Davis designed interior finishes, furniture, and landscape, as well as the building. Completed in 1842, it was first called ‘Knoll’ but was derided by critics for its revolutionary style.

Second owner George Merritt rehires original architect Davis to double the mansion in size between 1864-1867, to the house visitors see today. While the Paulding’s designed and utilized ‘Knoll’ as a summer retirement villa, Merritt commissions Davis to build him a spacious full-time residence worthy of a wealthy merchant of status. Merritt changes the name to “Lyndenhurst” and eventually “Lyndhurst.”

Wall Street tycoon Jay Gould purchases Lyndhurst in 1880 as a seasonal residence. Gould redoes some of the interior décor by commissioning furniture from the Herter Brothers, windows from Louis Comfort Tiffany, and paintings from the Knoedler Gallery. After Jay Gould’s death, his eldest daughter takes control and limits her changes to the mansion to interior updating and finishes, including the addition of electric and updating bathrooms. When her younger sister purchases the estate, she also follows in her sister’s footsteps and changes little but her childhood bedroom and décor. 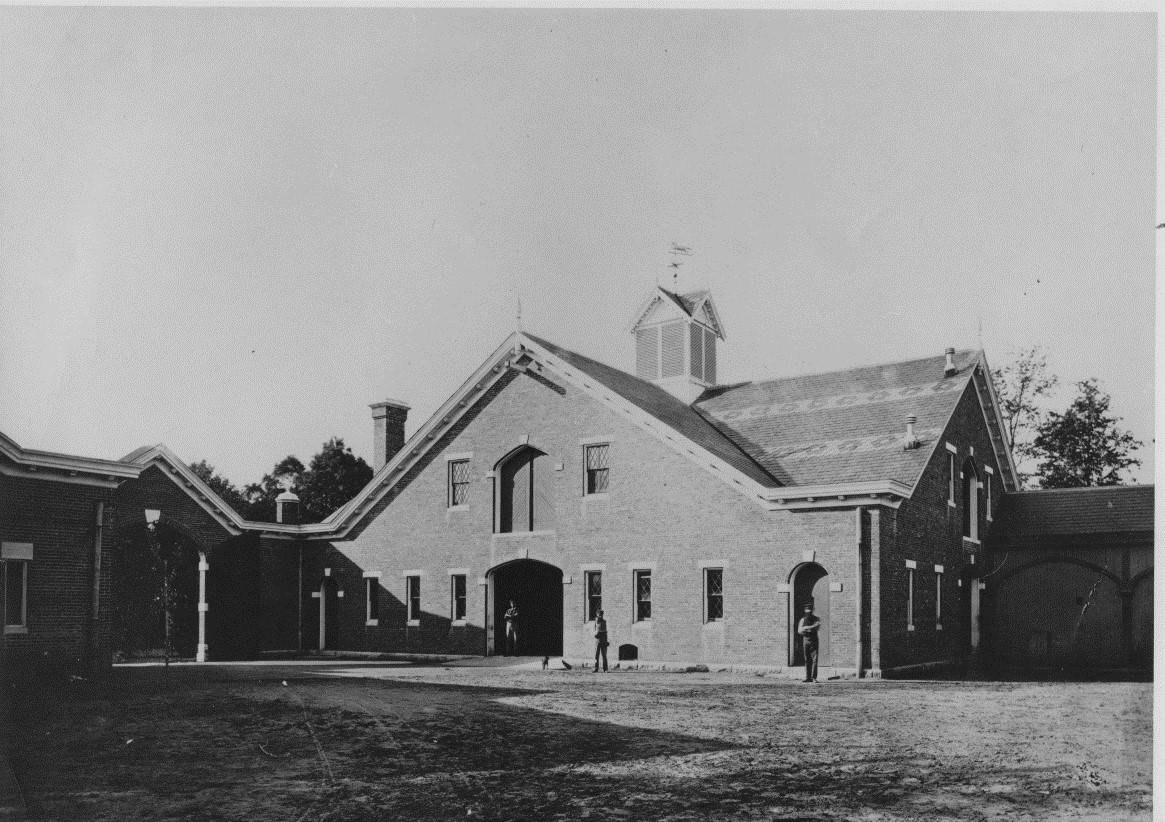 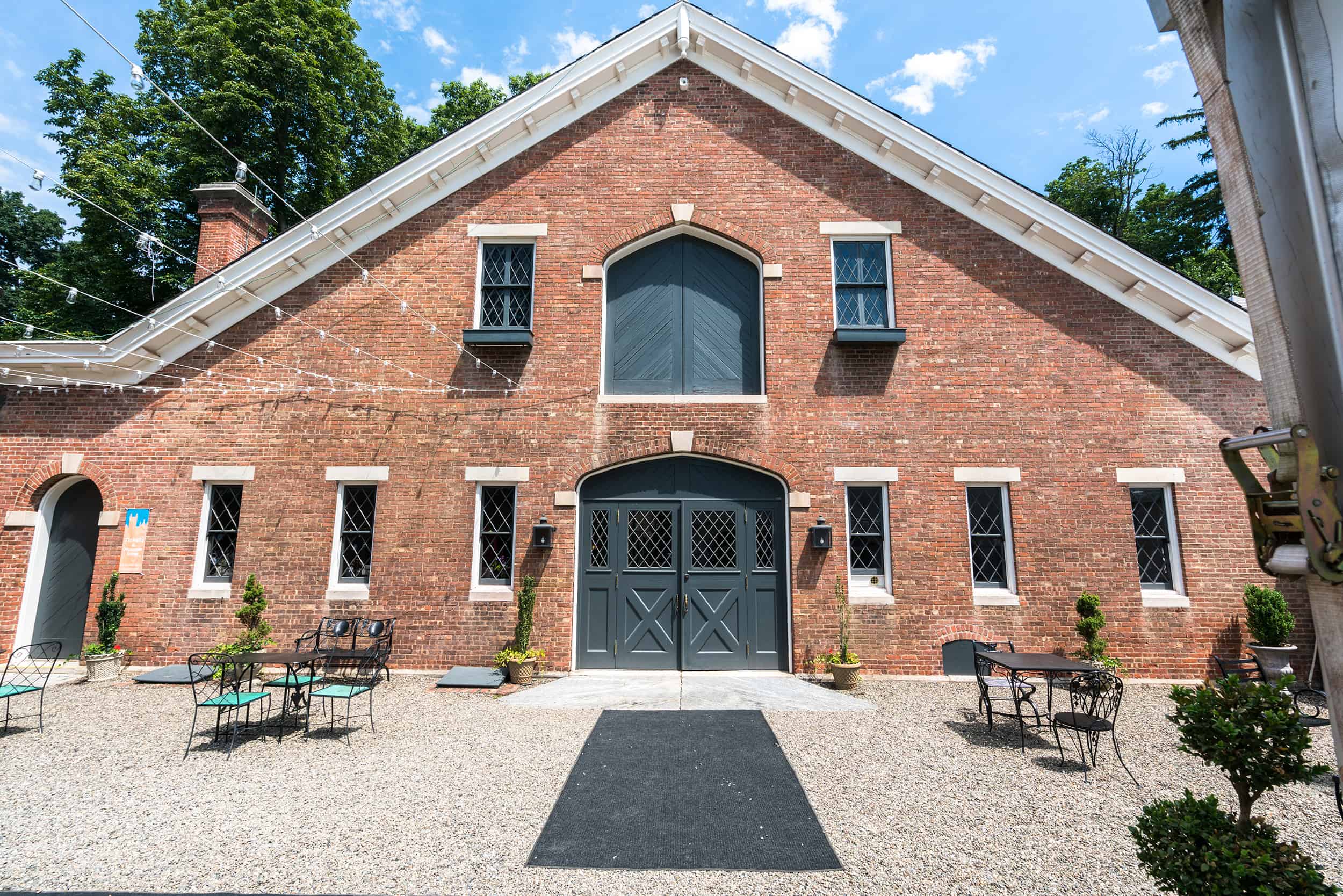 The mid-19th century brick and stone carriage house complex sits just down the hill from the Lyndhurst mansion on the site of William Paulding’s original wood stables from the 1840s. Expanded by second owner George Merritt, the complex included an elaborate carriage house with multiple rooms, a stable, and coal sheds. In 1911, Helen Gould added a garage for her cars. Today, it houses our Welcome Center, Gift Shop, Exhibition Gallery, and the Lyndhurst offices. 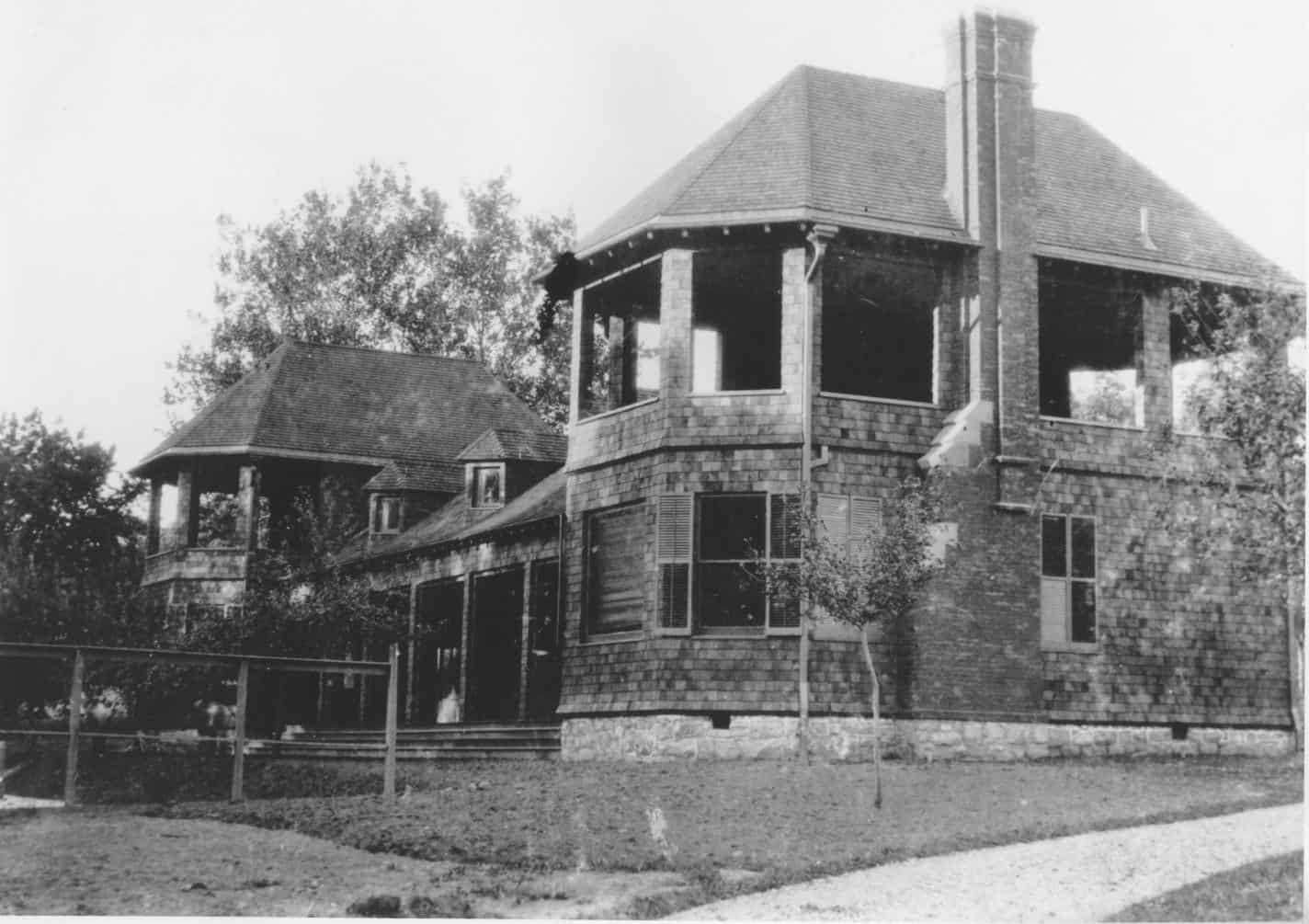 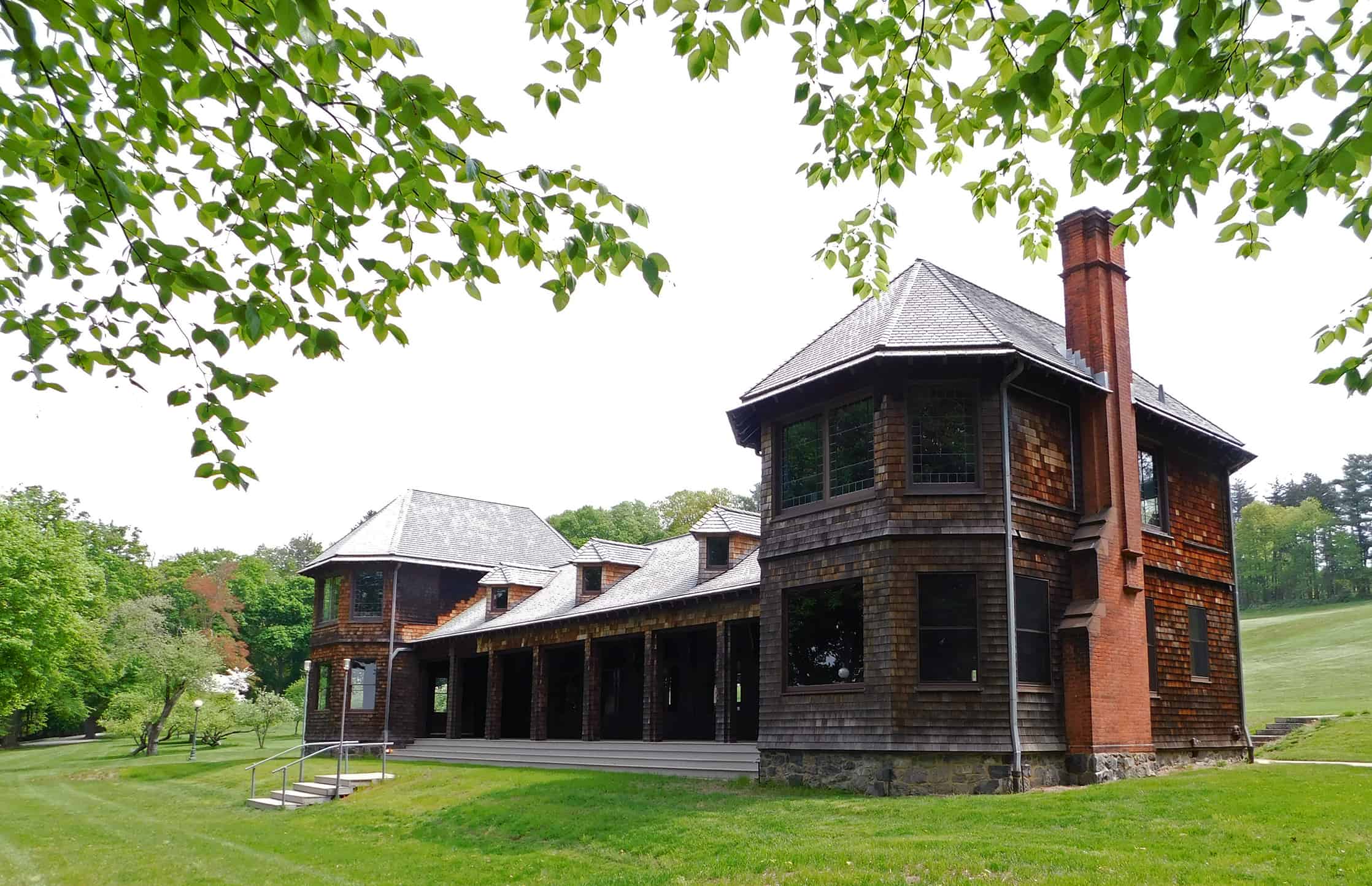 Added to the property by Helen Gould in 1894, the Hudson River-adjacent bowling pavilion houses two regulation-length lanes, two octagonal parlors, and a wide, river-facing veranda. Built immediately before the codification of modern bowling regulations, this is considered to be the oldest regulation bowling alley in the United States. An avid sportswoman, Gould championed bowling as it could be played equally by men and women. This building was also home to Helen Gould’s sewing school which provided local girls the opportunity to learn a trade providing a modicum of economic independence. 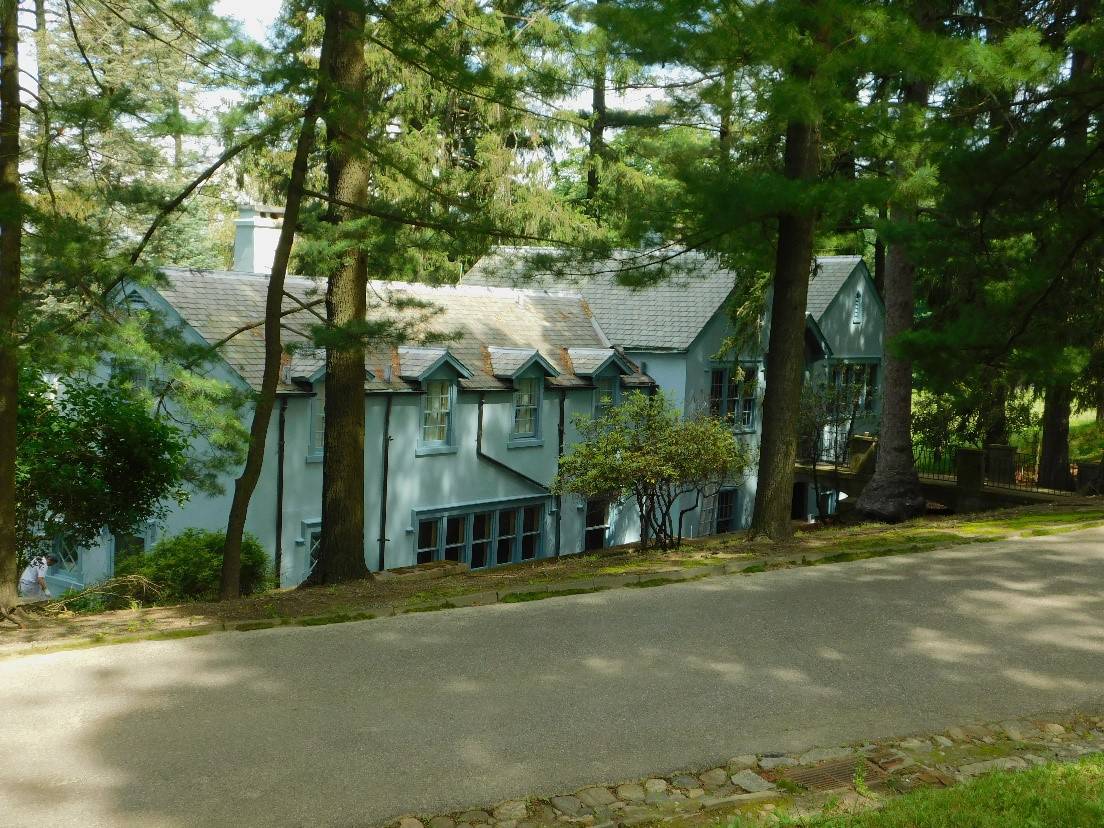 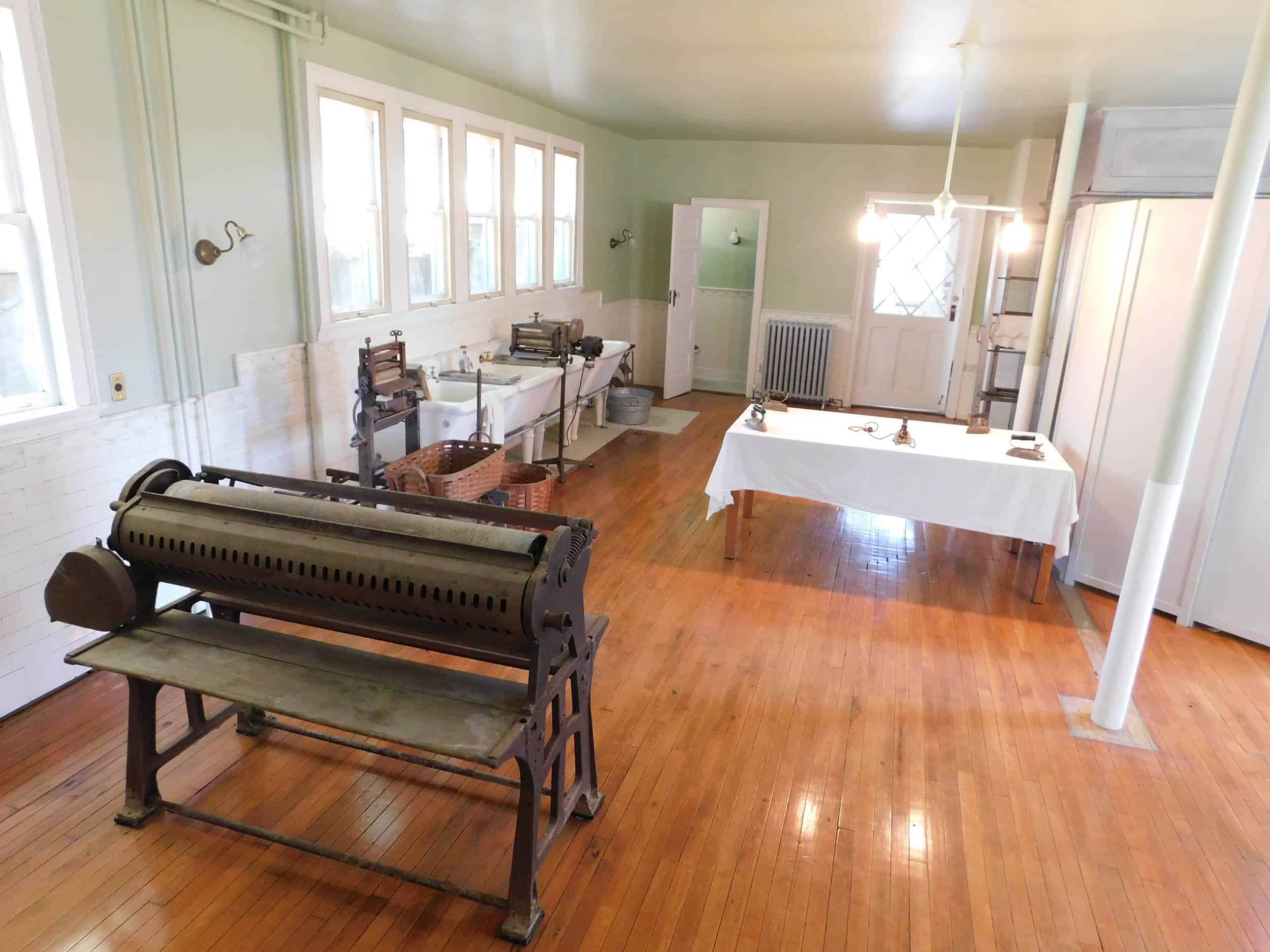 Constructed in two phases by Helen Gould starting in 1911, the laundry building served multiple purposes; housing the estate’s laundry facilities as well as dormitories for female servants, rooms for guests and family teachers, as well as a large room for the estate Sunday School. The building is located on the site of the former drying grounds for laundry at the rear kitchen entrance of the Mansion. The hillside location provided ample sunlight for the drying and whitening of linens and was screened by numerous pine trees that still exist today. The current restored laundry room includes many of Helen Gould’s original appliances including a gas-powered drying closet, multiple washing sinks, angles, and an early institutional electric washing machine. 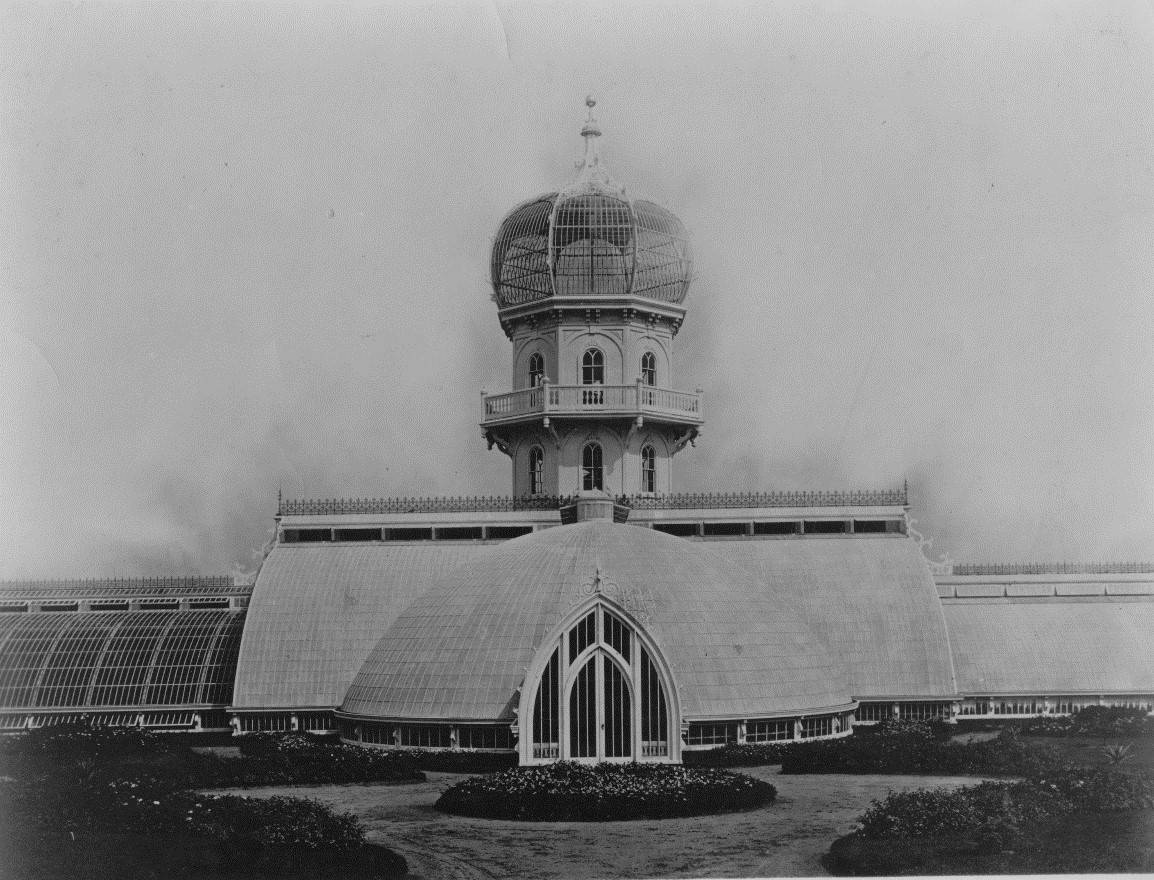 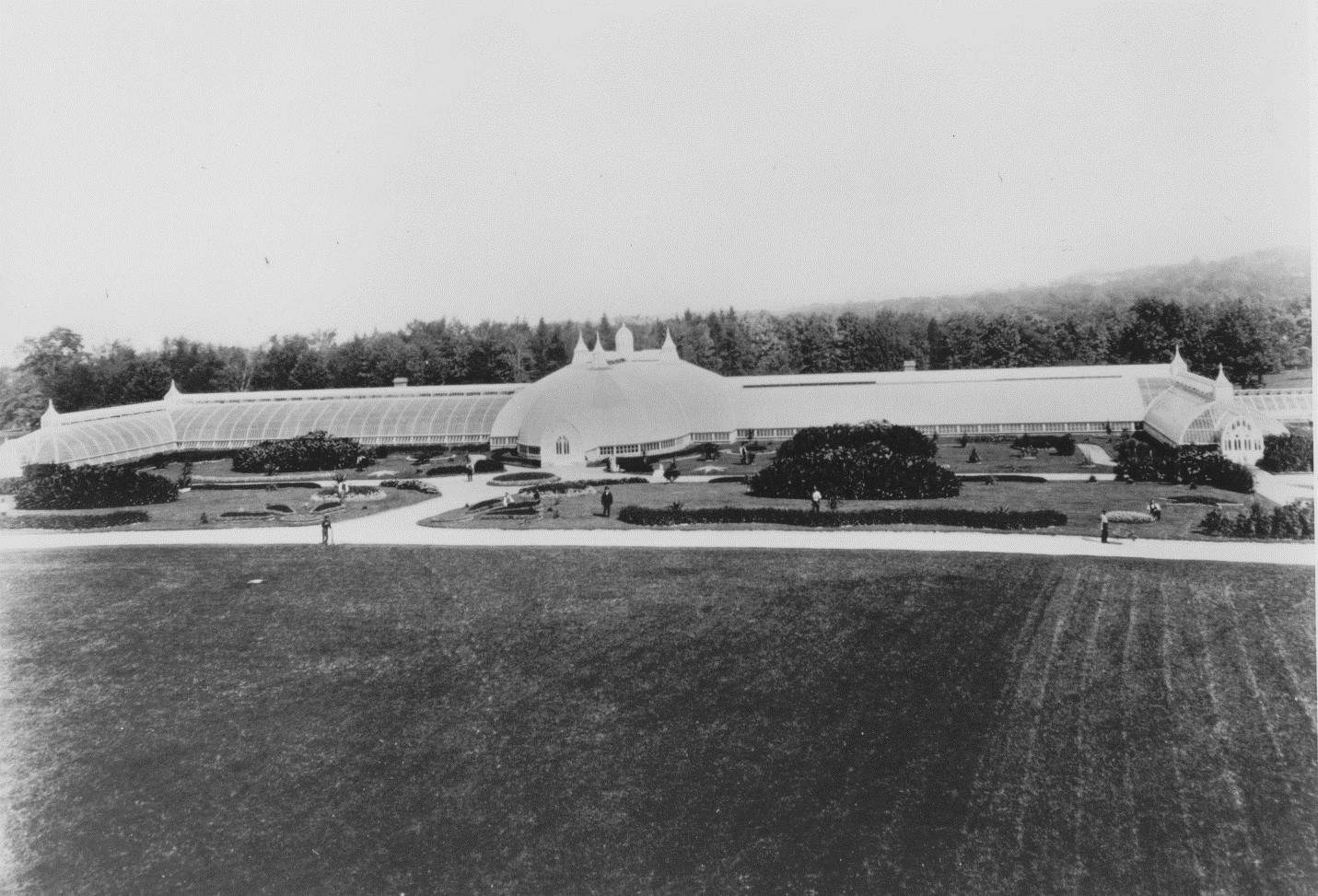 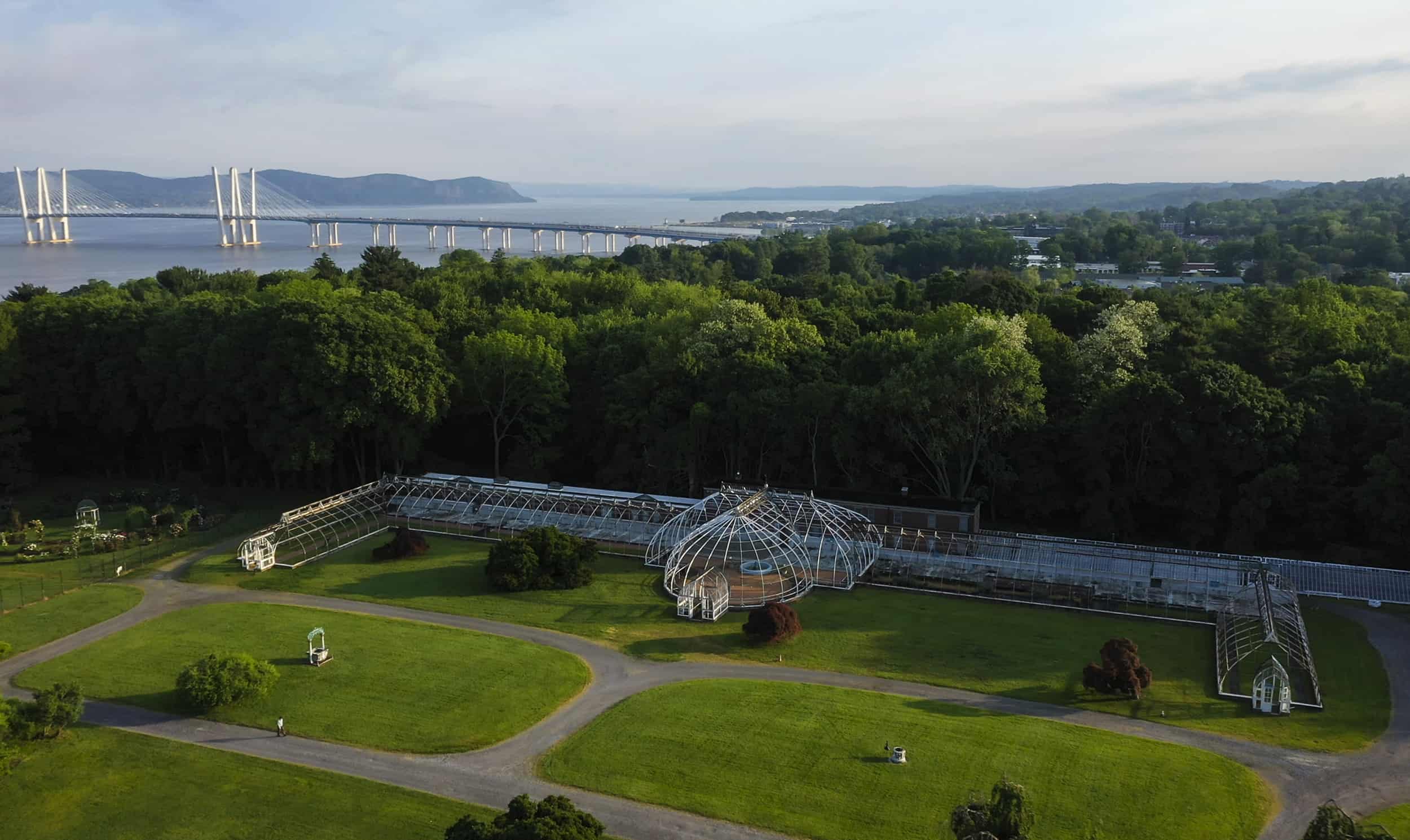 Second owner George Merritt built a massive wood-framed greenhouse on the Lyndhurst grounds in 1865. It housed an extensive collection of rare plants and was topped by a Moorish-style observation tower and aviary inspired by England’s Brighton Pavilion. Shortly after Jay Gould purchased Lyndhurst in 1880, the greenhouse burned to the ground.  Gould relocated noted greenhouse fabricators, Lord & Burnham, from Syracuse, NY to nearby Irvington so they could supervise the construction.

Gould’s greenhouse contained over 40,000 plants and was noted for its collection of tropical palms and more than 6,000 orchid specimens. During the Second World War with insufficient coal to heat the greenhouse, fifth owner Anna Gould, Duchess of Talleyrand, auctioned off the contents of the greenhouse to benefit the Red Cross. In an increasingly deteriorating condition, the greenhouse with its original glass panes in place makes an appearance in the 1971 film House of Dark Shadows but all that remains today is the original Civil War-era foundation, the Lord & Burnham metal frame, and a Fiske fountain in the original palm court. 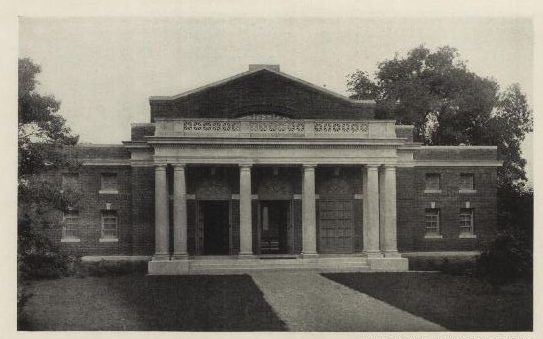 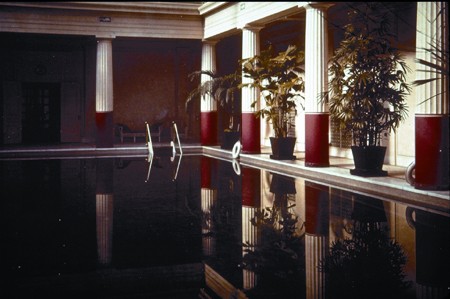 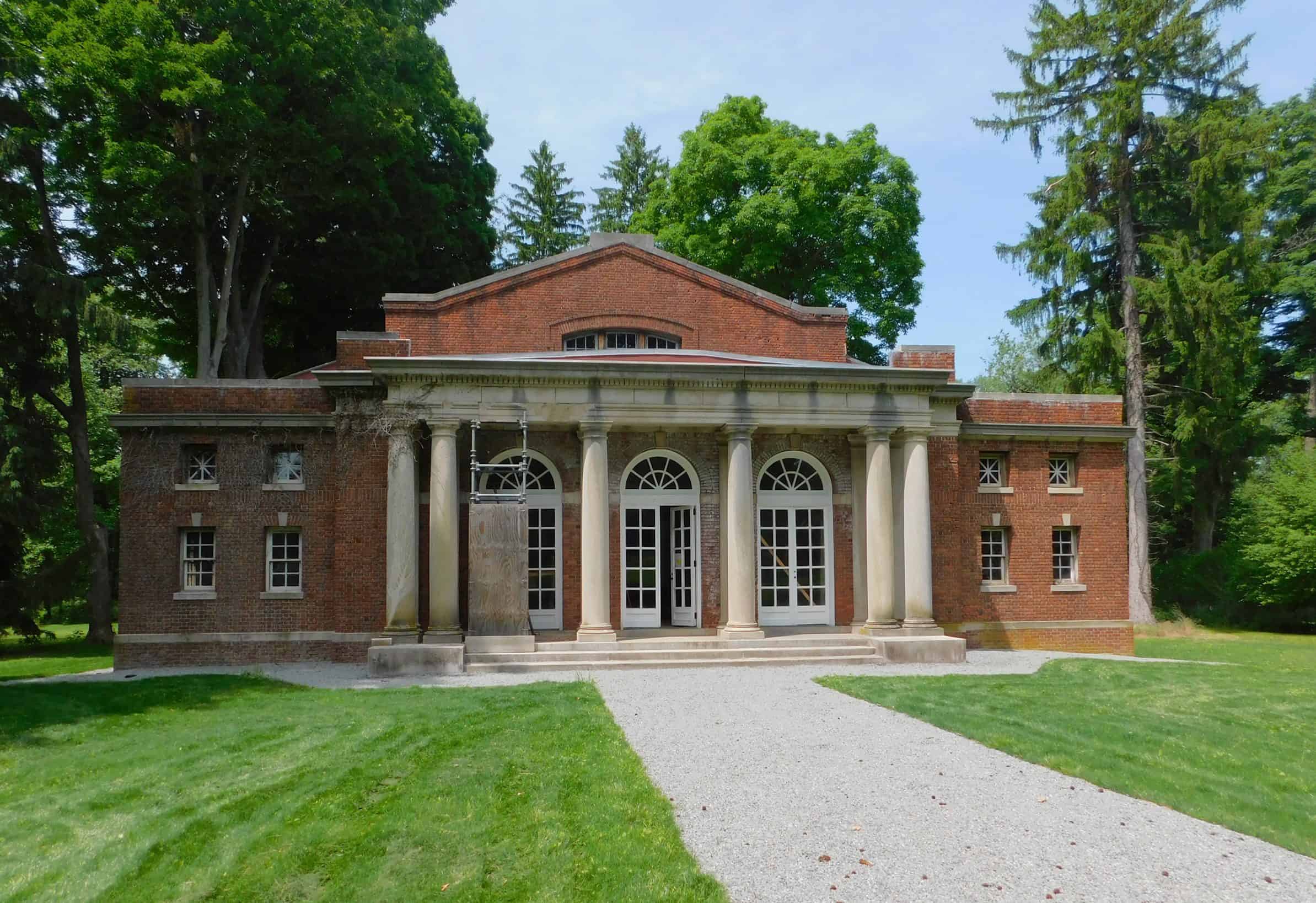 In 1910, Helen Gould constructs a stand-alone swimming pool building in the style of a Roman bath. The pool building was used by the Gould family and was opened to local children certain days of the week. The building contains an entry lounge whose wicker furniture still exists in the Lyndhurst collection, as well as male and female dressing rooms. The large swimming pool was covered by a glass roof and set with tropical palm trees from the Lyndhurst greenhouse. The pool was so large that the lifeguard sat in a rowboat in the pool. It was claimed to be one of the finest and most sophisticated swimming pools in the country. The Pool building fell into disuse and disrepair after Helen’s death in 1938. It was the focus of a major stabilization project in 1980 and again in 2020 and is currently open to the public on a selective basis.