Jay Gould and the Herter Brothers

Within a short period of time, Jay Gould, the 19th-century railroad baron, purchases a new mansion on Fifth Avenue, directly across from his prior home, as well as Lyndhurst, a country estate that his family had previously rented.

By 1880, when Gould makes these purchases, he was both one of the richest men in America but also one of the most hated and feared. Gould’s financial actions had led to a major market in 1869 that had cost many prominent New Yorkers their wealth. As a railroad investor, he was often in competition with the Vanderbilt’s, one of the undisputed scions of New York society. As a result, Gould was not “received” in many prominent New York homes and it seems that Gould’s social ambitions were more for business purposes than for the social advancement and that the decoration of his home was for the comfort of him and his children.

Despite his ruthless reputation on Wall Street, Gould was born in rural upstate New York and was a surprisingly traditional and devoted family man. By the time he purchased Lyndhurst as a country estate, the lower Hudson Valley had been surpassed by more fashionable areas such as Newport, the Berkshires, and Long Island. It seems that one of Gould’s main reasons for purchasing Lyndhurst is that he could work on Wall Street during the day and return to his family at Lyndhurst each night via his yacht. When Gould dies prematurely, his children were disconsolate and their perception of the loss of their beloved father is completely contrasted to the vitriol heaped on Gould’s death by the outside world.

Gould provided an extremely sumptuous and comfortable atmosphere for his family, both on Fifth Avenue and at Lyndhurst. Because of his status as a social pariah, Gould’s lavish homes may not have had the broader social impact of the residences designed and built by Astors and Vanderbilts. However, it is clear that Gould was aware of the tastes of his financial equals in New York and clearly wanted to hire the same teams of decorators to furnish his homes as were being used by those who would not let Gould into theirs. Gould was likely aware of the home being built by William K. Vanderbilt on Fifth Avenue using the Herter Brothers working in conjunction with John LaFarge to provide furniture, decorations, and stained glass for their residence. At the time Christian Herter was leading the firm founded by his older brother Gustave and was likely in poor health. He had declared that the Vanderbilt commission would be his last. However, Gould was probably too wealthy a client to pass up and Christian Herter agreed to decorate both of Gould’s new homes.

As was often customary, the Gould’s took the circa 1869 parlor suite by the Herter Brothers, that had been in their Fifth Avenue mansion and move the somewhat out-of-fate furniture up to their country house at Lyndhurst. Originally crafted by elder Gustave, Christian Herter brought the suite up to date by adding orientalist side chairs, a gilt ballroom chair and easel, and Japanese influenced table. Herter also extensively redecorated the Lyndhurst parlor. While he does not alter A.J. Davis’ architecture, Herter added elaborately patterned wallpapers throughout, changes out Davis’ gilt mirrors and places stained glass transoms and draperies on the inside of the windows, creating an incredibly sumptuous Aesthetic interior. 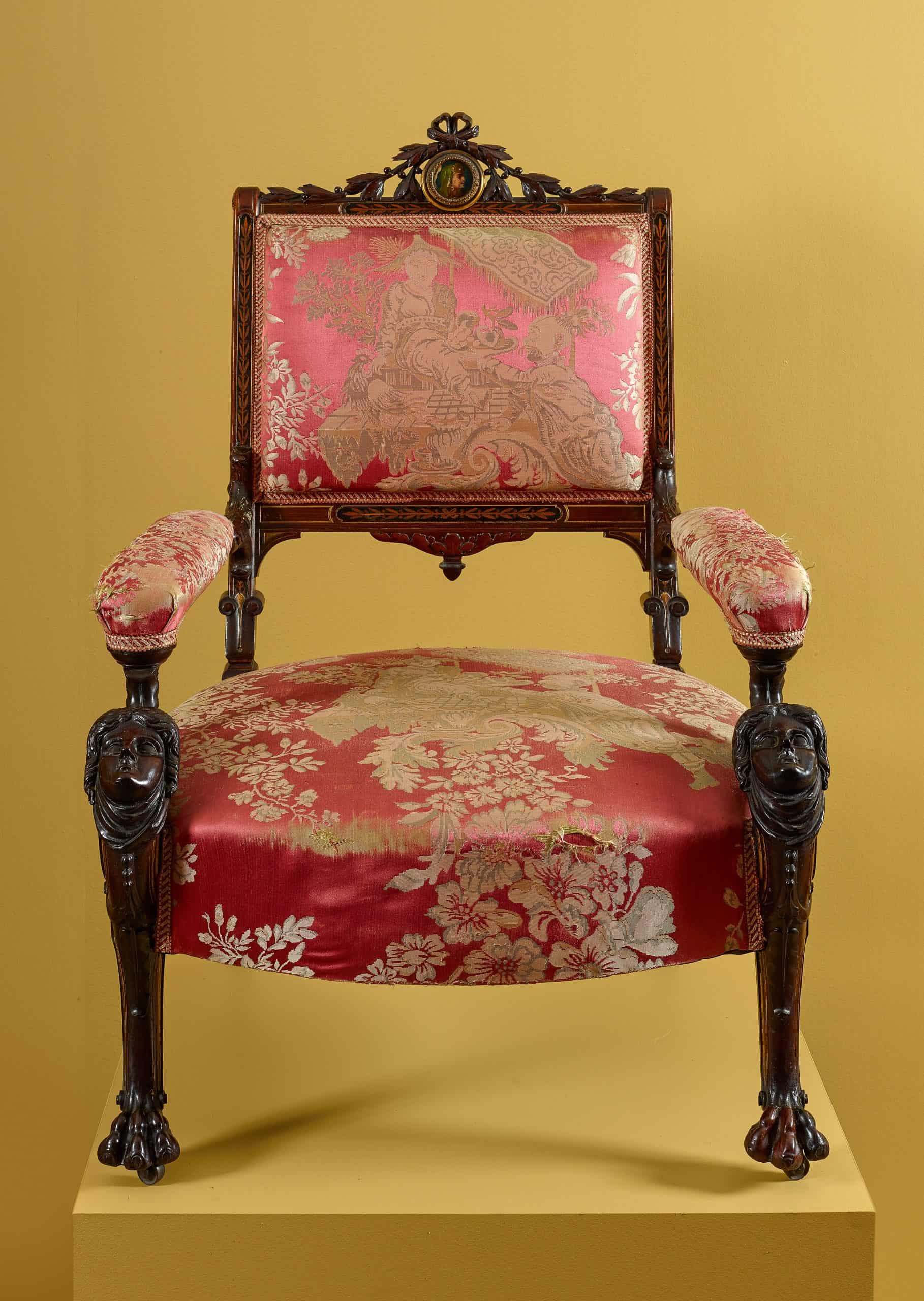 It is believed that this suite of furniture may have been acquired by Gould with his purchase of the first Fifth Avenue home, with this impressive suite serving a succession of owners in a succession of residences. The current upholstery, a Scalamandre chinoiserie silk, dates from the 1960s and references s decorative scheme of Anna Gould, the Duchess of Talleyrand, and the final owner of Lyndhurst. This may be one of five upholstery schemes on the furniture as it was updated for successive owners. The original was probably tufted silk in the latest French Second Empire taste, of which extant examples can be seen in the music room furniture designed by Gustave Herter for the Lockwood Matthews mansion. 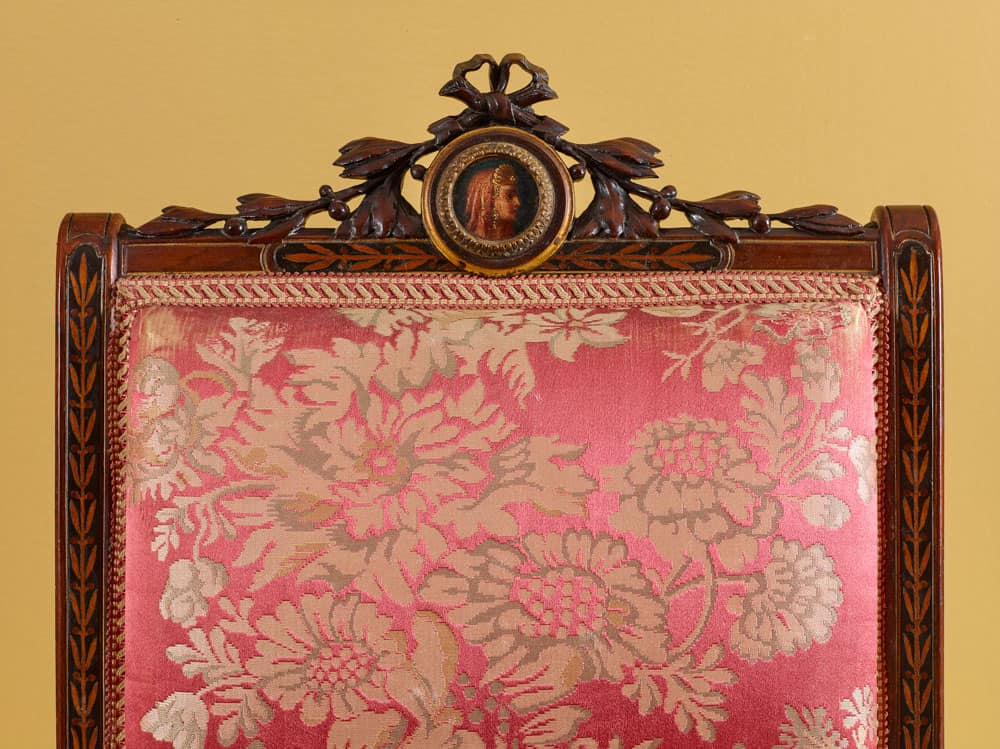 These pieces display an impressive carved female classical heads while the love seat displays male Egyptian heads. The Herters worked with French decorative painter Pierre-VIctor Galland to embellish both their furniture and architectural commissions of the period. Other examples of the suite have appeared at auction although not with the missing classical heads. It appears the clients could choose their preferred scheme from the Herters. 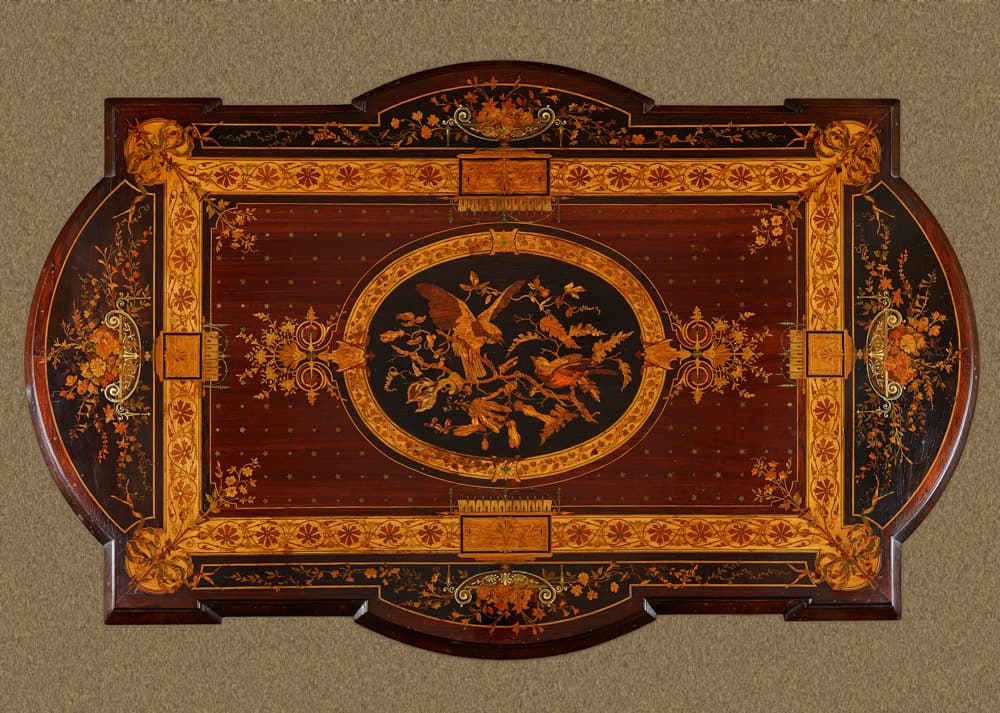 Heavily inlaid center tables, so-called because they sat at the center of a room, often underneath an impressive chandelier, were often the decorative piece-de-resistance of the parlor. The Lyndhurst center table bears a heavily inlaid top featuring flowers and birds similar in feeling to the pieces designed by the Herters for the Ruggles Morse residence in Portland, Maine circa 1860, and for the LeGrand Lockwood residence in Norwalk, Connecticut circa 1870. The marquetry and design of the suite are American versions of the reinterpretation of Louis XVI furniture being produced in Second Empire France being produced by such skilled practitioners of the marquetry craft such as Joseph Cremer (1811-1862). 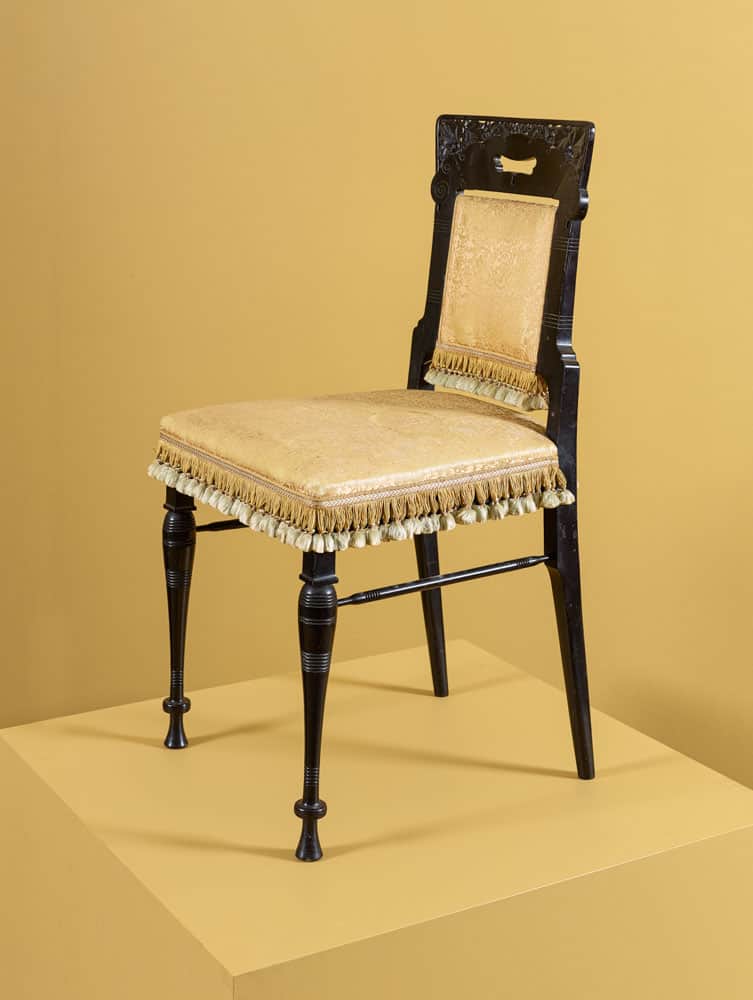 To modernize the Lyndhurst Parlor, Christian Herter adds a number of pieces of his design in the more au courant Orientalist taste. This unique side chair displays the Macmurdo feet that Christian Herter uses on more traditional pieces of the time (see gilt ballroom chair in the collection of the Museum of the City of New York) but provides a complex unique shape and reticulated decorative scheme to the back. The current yellow brocade and tasseled upholstery is reminiscent of the reupholstery undertaken in 1913 by Helen Gould when the parlor was redone for her wedding. Stereoviews of the 1880s parlor show that the pieces were probably upholstered in dark velvet with long hanging tassels under the seat and were meant to contrast with the red upholstery and inlaid mahogany of other pieces in the room. 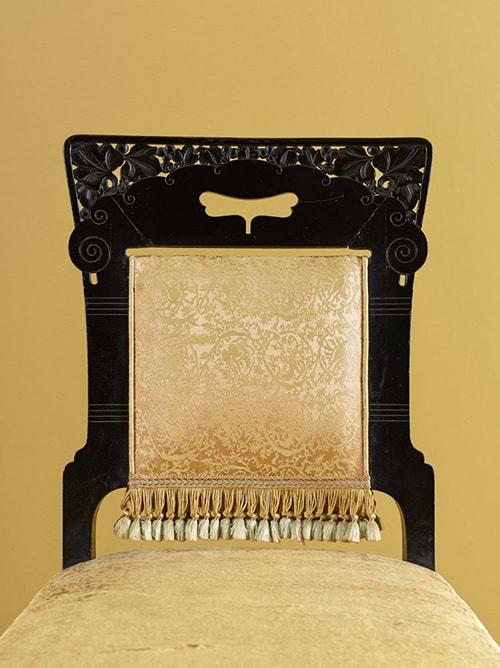 Detail of Ebonized Side Chair in Orientalist Style, c. 1882

Loosely in the Orientalist Taste –displaying a non-Western shaping and flowers in the reticulated work– pieces like this chair were more often than not copied from English or continental interpretations of Asian furniture and pertain more to the Aesthetic Movement style than to actual Asian pieces. 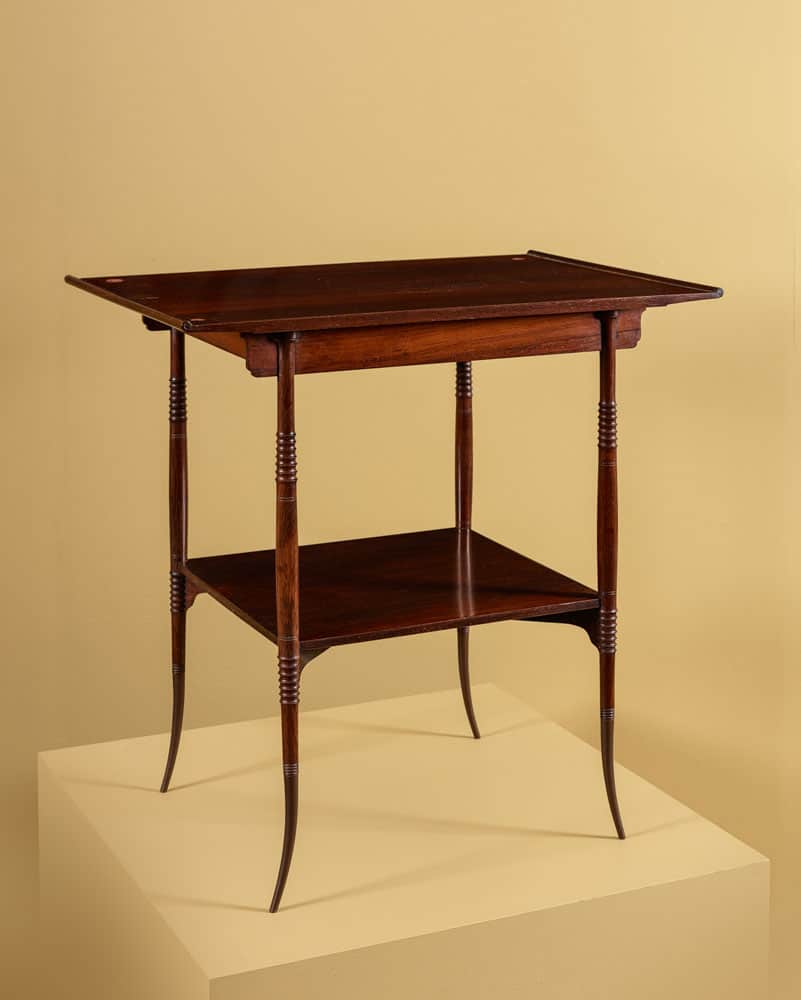 Another example of Christian Herter’s introduction of Orientalist furniture to Lyndhurst, this side table contrasts markedly with the black lacquered Orientalist side chairs also added at the time. Unlike the black lacquered side chairs, which are more referential of Aesthetic Movement taste, this delicate side is taken almost directly from Medieval Japanese examples. These pieces are incredibly rare and among the most prized in Christian Herter’s oeuvre and Lyndhurst is fortunate to have three examples of such furniture.

As part of the redecoration of the Lyndhurst parlor, Christian Herter introduced a number of elements to diminish the outdated Gothic style of Alexander Jackson Davis’ surviving architectural scheme. Extant stained glass exterior windows were covered on the interior with a combination of portieres and impressive stained glass transoms held in mahogany frames. The transom windows bear a close relationship to work being done at the time by John LaFarge and the decorating company he founded although no records exist to provide definitive proof. The designs are clearly drawn from LaFarge’s repertoire as the five transom panels (three of which are exhibited) display a facing crane, phoenix, and a peacock, all from LaFarge’s heavy Orientalist-inspired vocabulary.

Because the transoms were mounted on the interior of existing windows, they have survived in remarkably good condition and much of the glass is quite close to that being produced in La Farge’s studio at the time, including some of the larger hand-made jewels, the pinkish-white glass used in the Asian-themed clouds, and the rippled glass used in the peacock feathers.