Anna Gould inherits from her father a strong sense of self and a healthy indifference to the opinions of others. She displays continuing independence in her lifelong fashion choices and refuses to give up a fashionable lifestyle despite divorce, dislocation, widowhood, and old age. She embodies the modern female sensibility of dressing to please oneself. Her years in Paris gave her the eye and confidence that is displayed by the sophistication of her clothing choices.

Anna ends up wedding two French aristocrats and is the real-life example of the Downton Abbey-style American heiress who gains a title through marriage. Unlike many of her peers, Anna marries European aristocracy by accident rather than design. Anna’s marriage is conducted in the United States, to Count Boni de Castellane, so that she can retain her fortune and option for divorce. Initially, she is a reluctant aristocrat and chafes under the strictures of French society and displays independence not typical of other aristocratic wives.

While Anna does not conform easily to French social standards, she does take the full force of the opportunities for shopping afforded to an American heiress in the French capital. Anna becomes a major acquirer of clothing, jewelry, and luxury goods frequenting the Place Vendome and couture houses of the city. She comes of age during the Edwardian era and her lifelong taste seems to remain with the frilly and feminine styles and soft colors of that period. Gould returns to the United States in 1939 at the age of 64 after the death of her second husband, the Duke of Talleyrand, and in advance of the Nazi invasion. She immediately tries to recreate the luxe of her French lifestyle and chooses to remain fashionable at a time and age when many of her American peers are far more conservative in dress and preserves a habit of dressing in a very youthful manner, regardless of age.

As shown by her remaining wardrobe at Lyndhurst, Gould does not frequent the American couturiers coming into their own during the Second World War. Perhaps because of her age and less than perfect figure, Anna patronizes a virtually unknown maker of custom clothes on Fifth Avenue, Maison Burano, where she can be a premier client. Her purchases seem to show a touch of nostalgia for earlier styles and while she is progressive in wanting to stay fashionable at 65 in a time when 40 was considered old, she no longer seems to have the desire or stamina to patronize a new crop of unknown American designers.

Anna Gould’s wardrobe, as presented, shows the continuous evolution of fashion from 1900 through 1950 from the Empire revival dresses of Redfern to the simple but chic wartime day dresses in the style of Chanel. 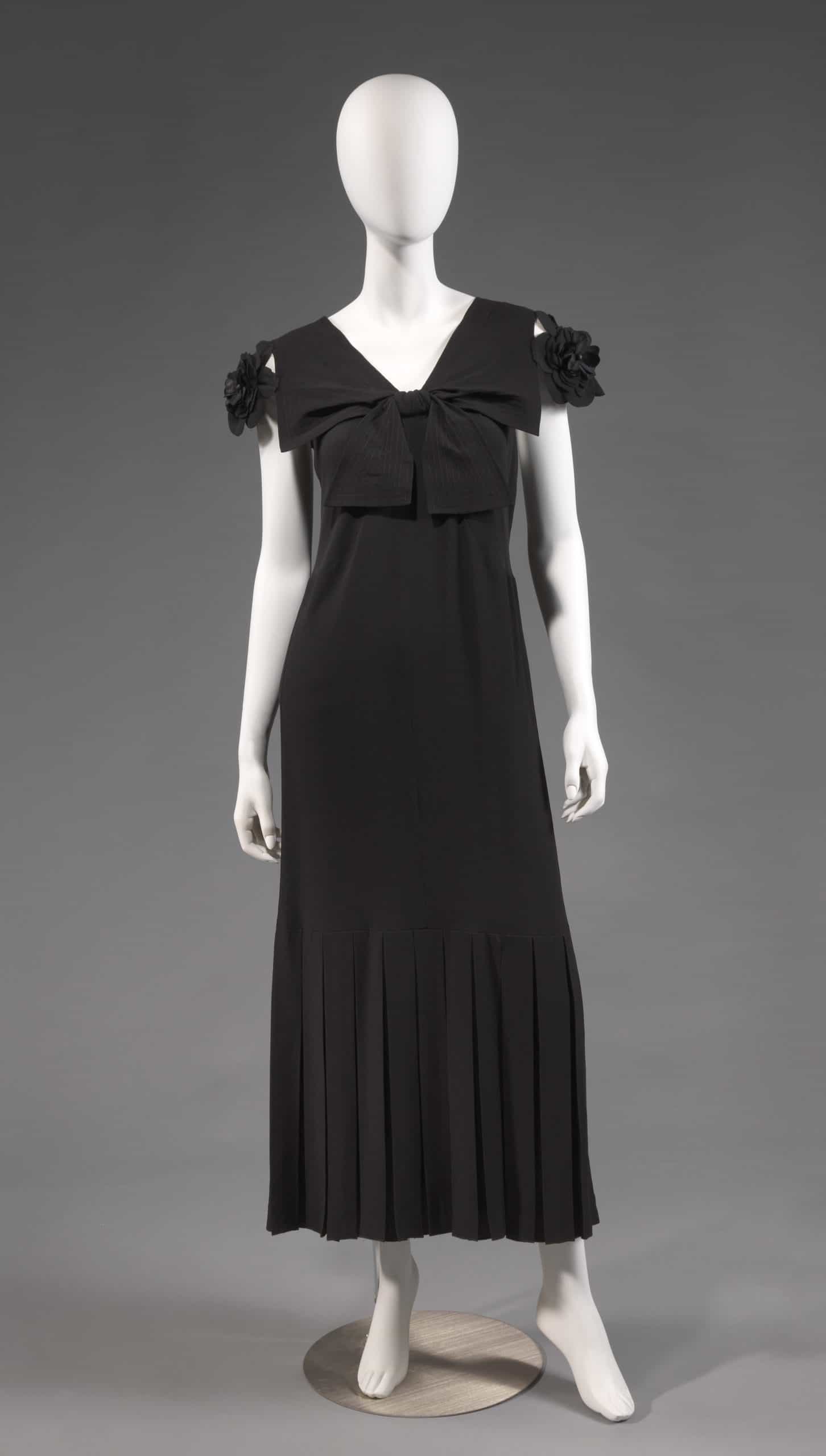 This is one of the few dresses in the Lyndhurst collection bearing a couture label and was probably brought to America by Anna Gould when she left Paris in 1939, Jerome was one of Anna Gould’s favorites in the 1920s and 30s, although little is known about him today. The Lyndhurst archives retain a 1938 letter from Jerome begging for Anna’s continued patronage. Because Jerome was not well known in the United States, his label may have survived in this dress as it might not have triggered the attention of customs officials as would a label from Chanel or Schiaparelli. Jerome, who was Jewish, had his shop closed by the Nazis in 1942. 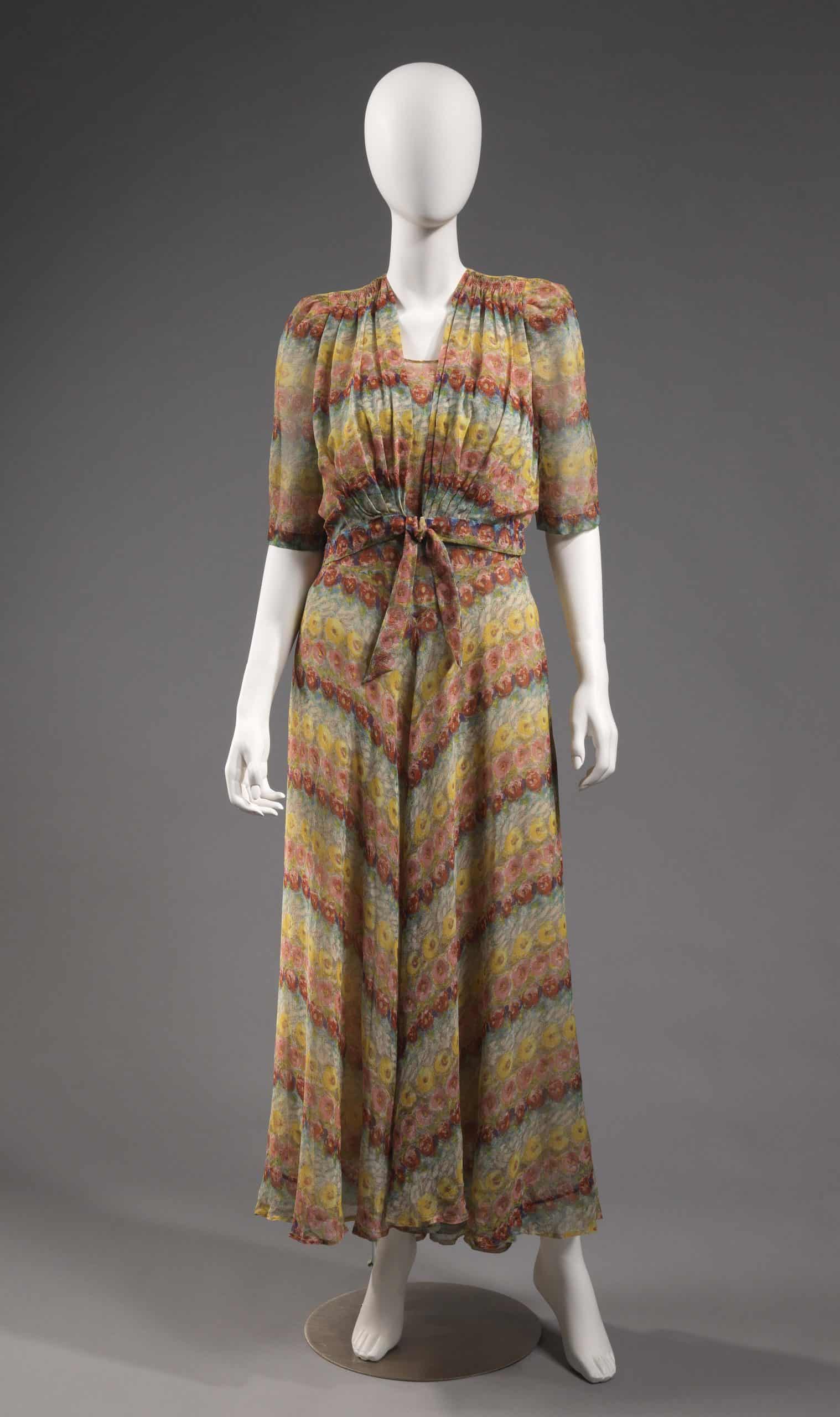 When Anna Gould returns to the United States in 1939, she comes with a limited wardrobe. This is one of the few dresses that does not bear the label of retailer Maison Burano in the Lyndhurst collection. Because of its style, typical of the late 1930s, this may have been one of the dresses that Anna Gould brought with her to the U.S. Anna was known to remove the couture labels from her garments when she traveled, a common ploy of the time to prevent payment of import duties. The sophisticated use of bias cutting, fine internal finishing, and luxurious printing on this dress suggests the influence of couture. 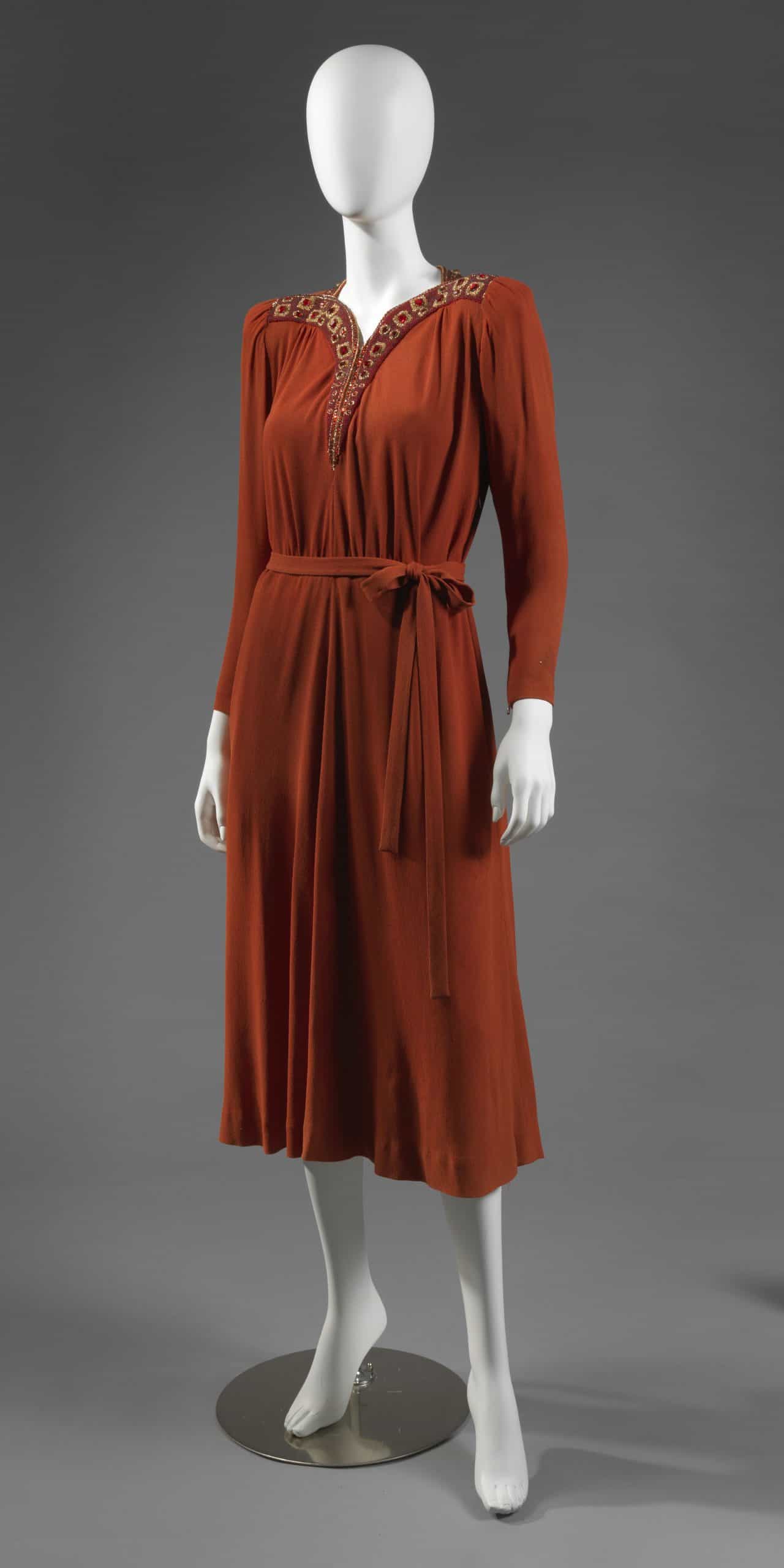 In 1939, Anna Gould leaves Paris with her dogs and limited suitcases expecting to wait out a short war in New York. She arrives in the U.S. uncertain of whether she will be allowed to stay, as she had given up her American citizenship to marry into French aristocracy. Like refugees at all economic levels, she immediately tries to recreate her former existence. She frequents Maison Burano, a Fifth Avenue retailer that catered to women of a certain age who wanted to remain fashionable. Maison Burano probably sold both French couture and deft American copies, both under its own label. Many of the dresses they made for Anna are reminiscent of earlier Parisian styles rather than the fashionably cutting edge. 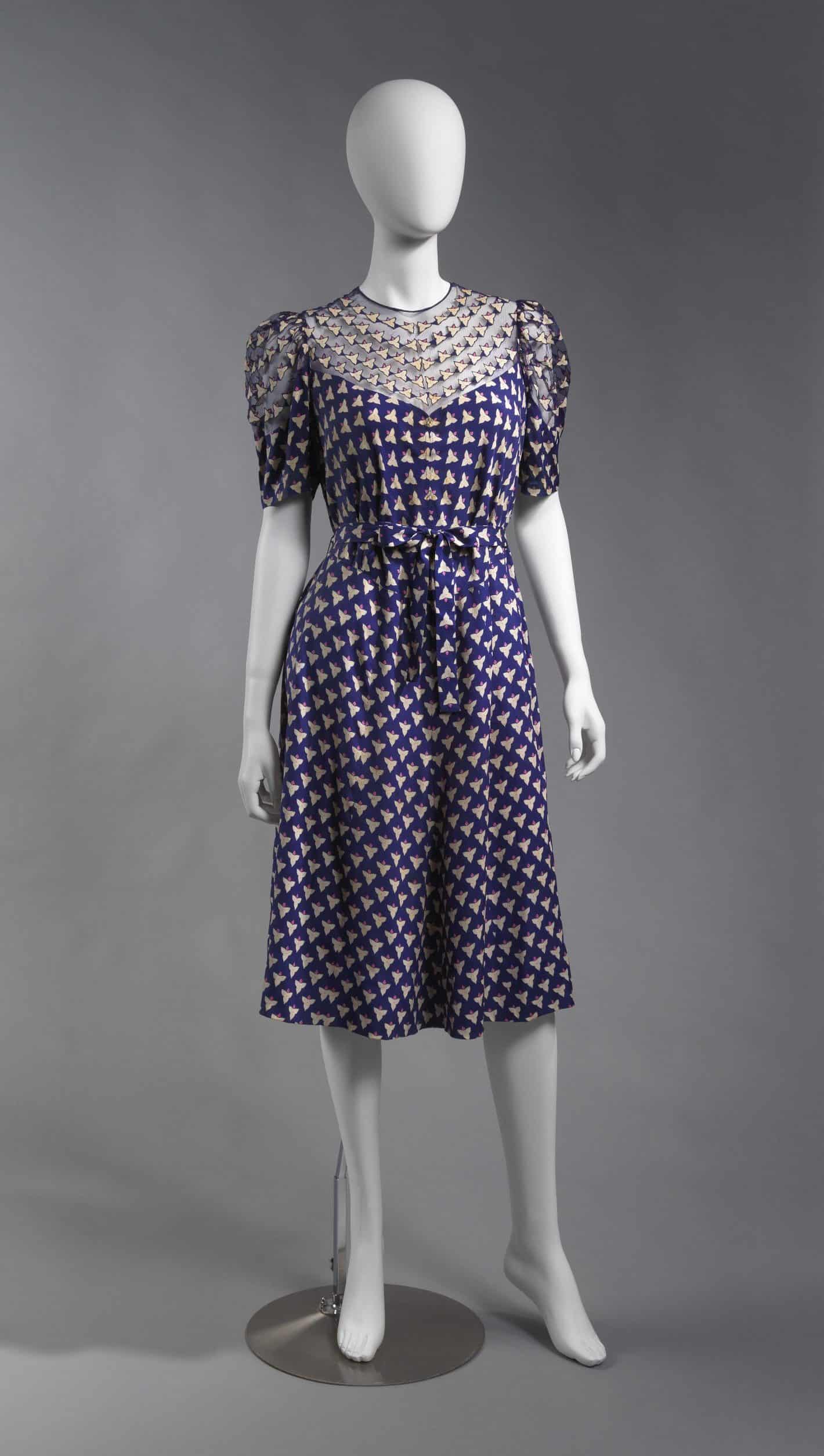 While not possessed of the looks or figure to distinguish her as an international beauty and style-setter, Anna Gould always maintained steely independence that allowed her to survive divorce, widowhood, and the Nazi invasion of Europe. Her years of shopping in the best stores in Paris gave her a level of confidence that allows her to purchase unique fashion items in New York, whether from a famous couturier or American copyist. This Chanel style dress, purchased after her return to New York at the age of 64 reflects her ongoing desire to remain independent and chic, regardless of age. 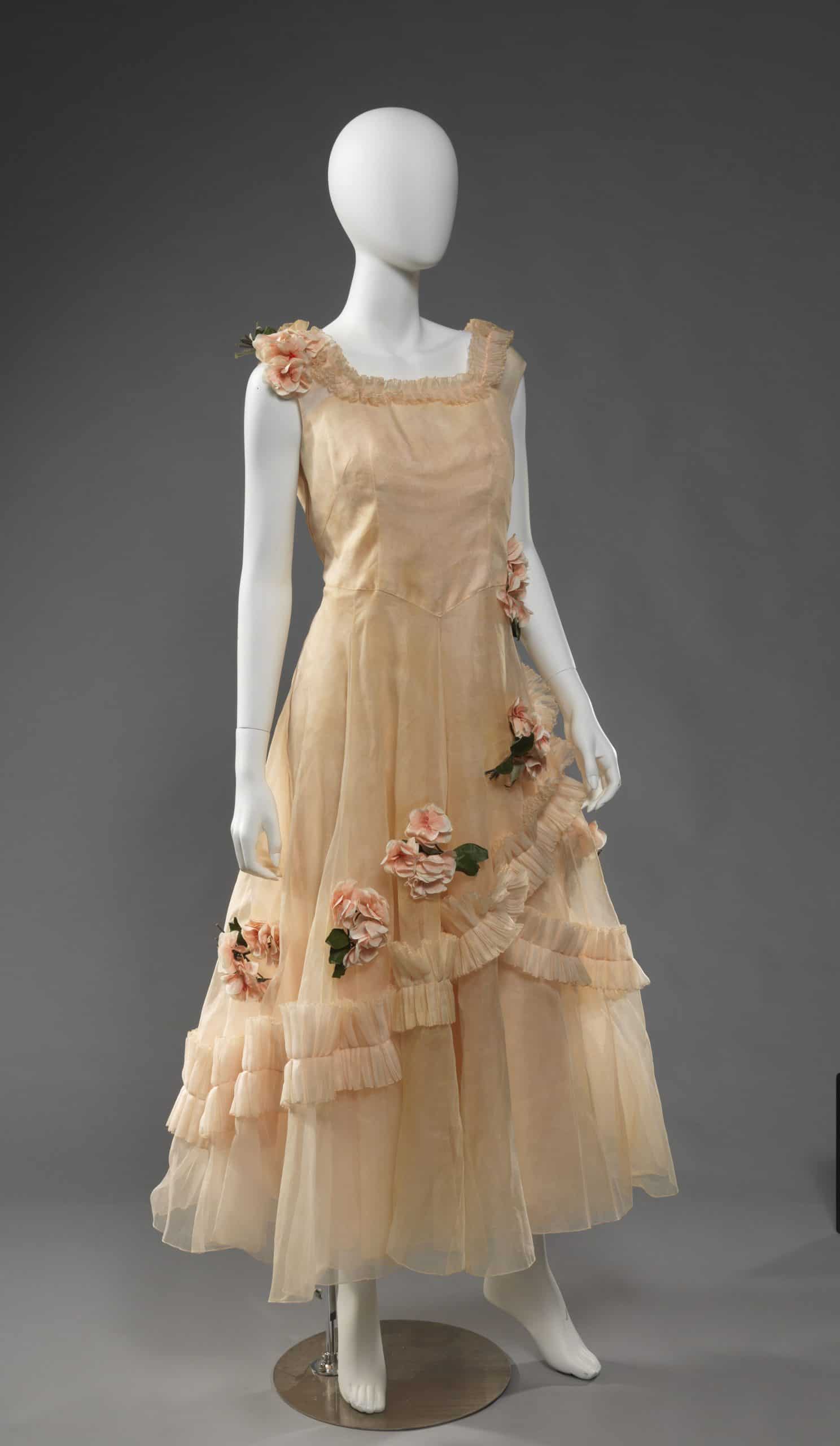 Although Anna Gould arrives in the United States as a widow in her 60s, she continues to dress in a style that is younger than her age. While this overemphasis on youth is often seen as a contemporary habit for women, it has a long history. Anna Gould was a lifelong proponent of this philosophy and encouraged her daughters to do the same. Anna Gould wears this dress when she is in her 70s and at a time when the more typical style for American matrons was that espoused by Bess Truman and Mamie Eisenhower. Anna tries to recapture the youthful style of dress she knew before the war, without apology. The style of this dress is reminiscent of Lanvin’s robe de style of the 1930s reinterpreted for the 1950s with a tucked Basque waist, plastic boning, and wide crinoline skirt.