While there is a small possibility that Jay Gould may have purchased an early kerosene lamp, it is likely that all the other Tiffany lighting was purchased by his daughter Helen. The earliest documented Tiffany lamp in the Gould collection appears in a photograph of the Lyndhurst library dating to about 1905 showing a large domed favrile glass shade with protruding kerosene chimney on what appears to be a Chinese bronze base (see header image). As Helen Gould did not electrify Lyndhurst until 1913, it is likely that all the remaining lamps in the Lyndhurst collection were purchased after that date or were brought to the country from the Fifth Avenue mansion at that time.

Gould seems to have used Tiffany in a way typical to the period. Larger and fancier lamps were placed in more public rooms on the first floor of her homes, include peony and lily lamps. More conventional lamps were placed in second-floor bedrooms, including vine and leaf, heavy ribs, and linenfold varieties. Functional lighting in offices, on desks, or near pianos seem to have been of the simplest types, and in both Lyndhurst and Fifth Avenue, basic favrile shades were ubiquitous.

Helen Gould’s one remarkable peculiarity was retrofitting existing gas fixtures from the 1880s as she modernized her residences with electrical service. These old-fashioned fixtures were oddly elaborated with prominent Tiffany lamps, including a massive poppy shade and dragonfly drop head chandelier. As a moth glare reflector exists in the Lyndhurst collection, it is likely that a floral lamp with a slanted shade, appropriate to hold such a moth screen, had been in the Lyndhurst collection at one time.

Catalogue descriptions from the 1942 sale are tantalizingly slim with most spending far more time describing bronze bases than the Tiffany shades. The only definitive lamp description from the catalogue, “base composed of water flowers from which emanate twelve branches of water lilies in iridescent glass,” clearly refers to a twelve-light lily lamp. The 1923 photographs of Fifth Avenue really provide us with our most complete record of Gould’s purchases.

During this exhibition, multiple Tiffany lamps were deployed throughout Lyndhurst to reflect Helen Gould’s holdings. 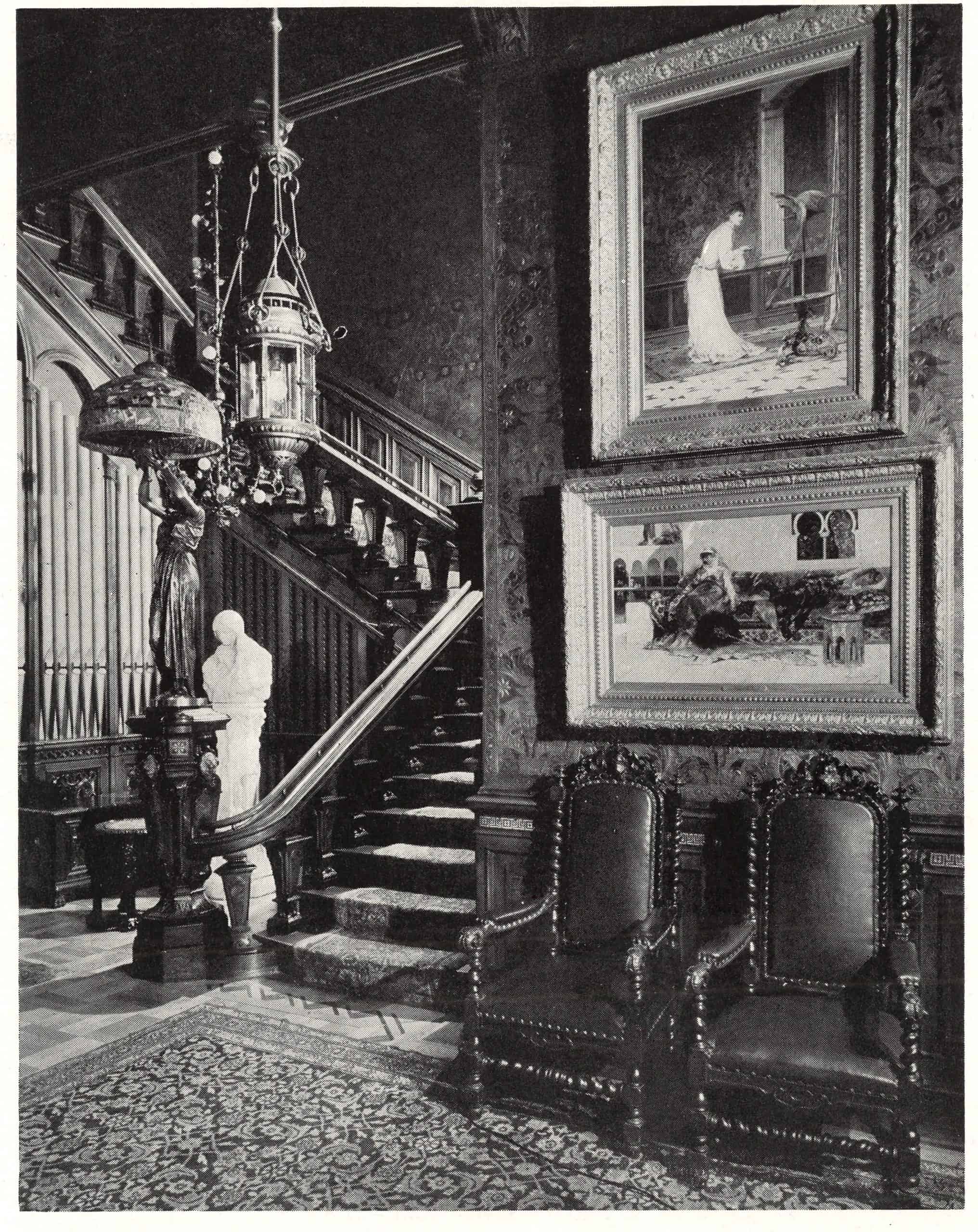 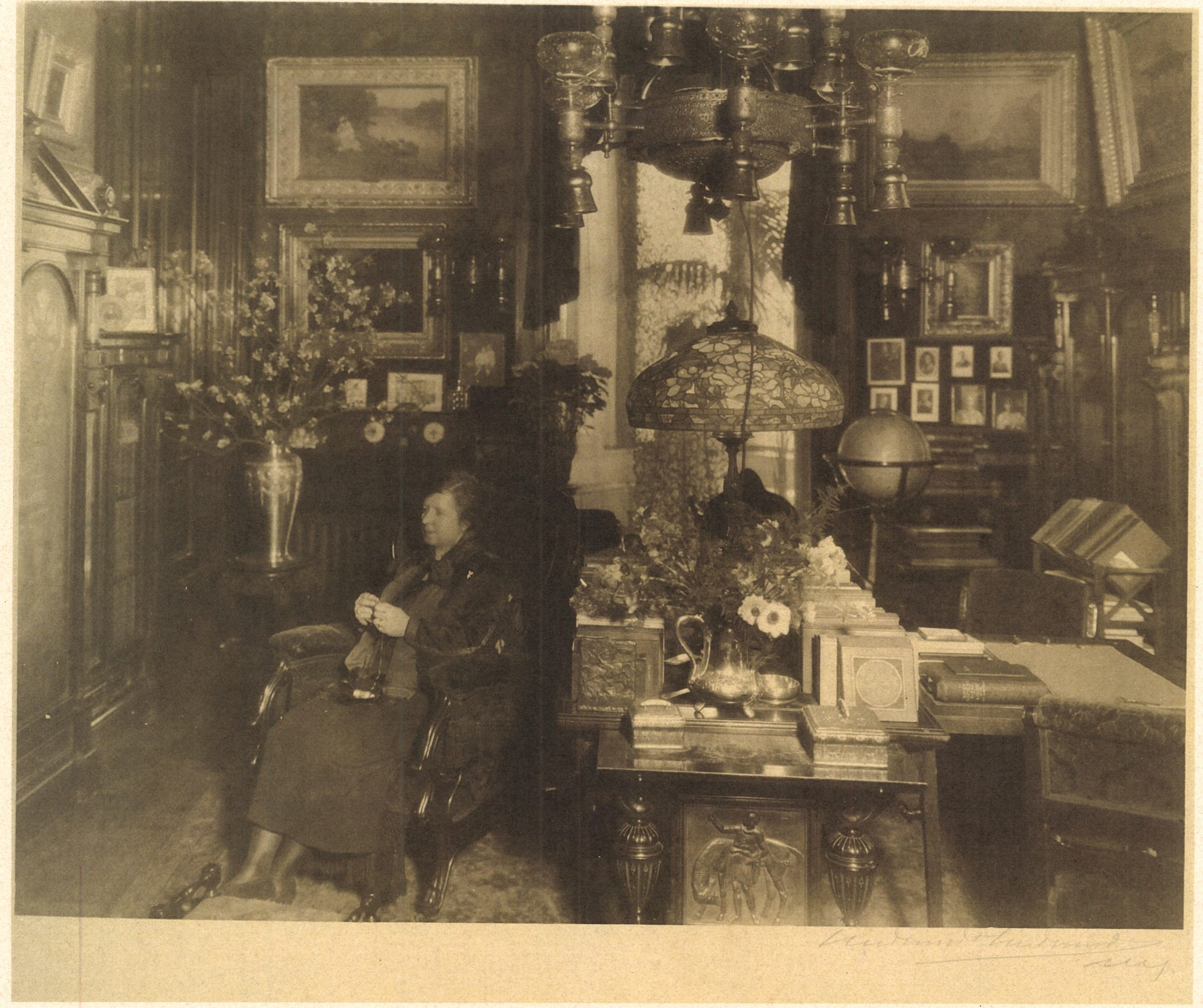 A large Tiffany peony shade lamp rests on the table beside Helen. 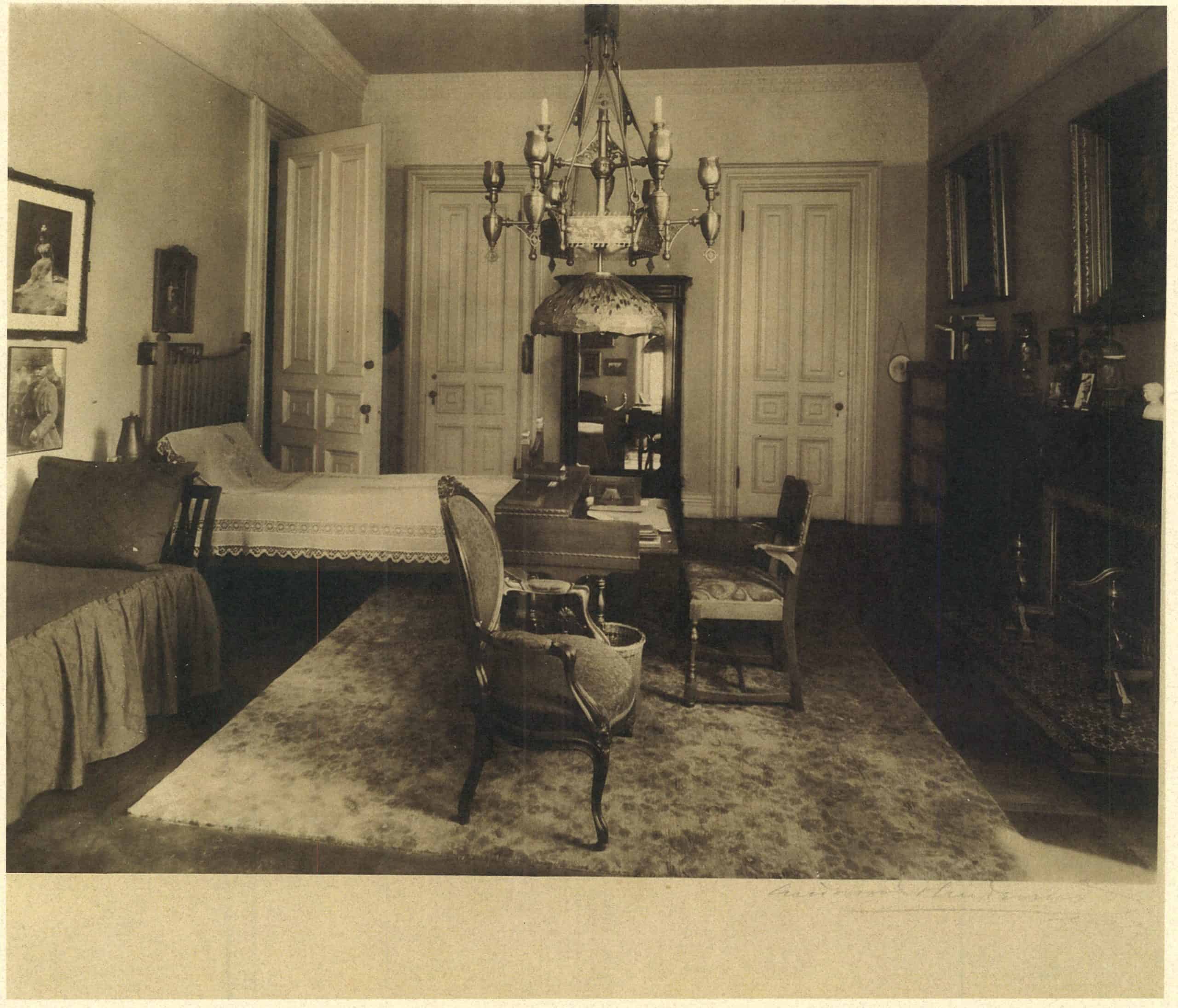 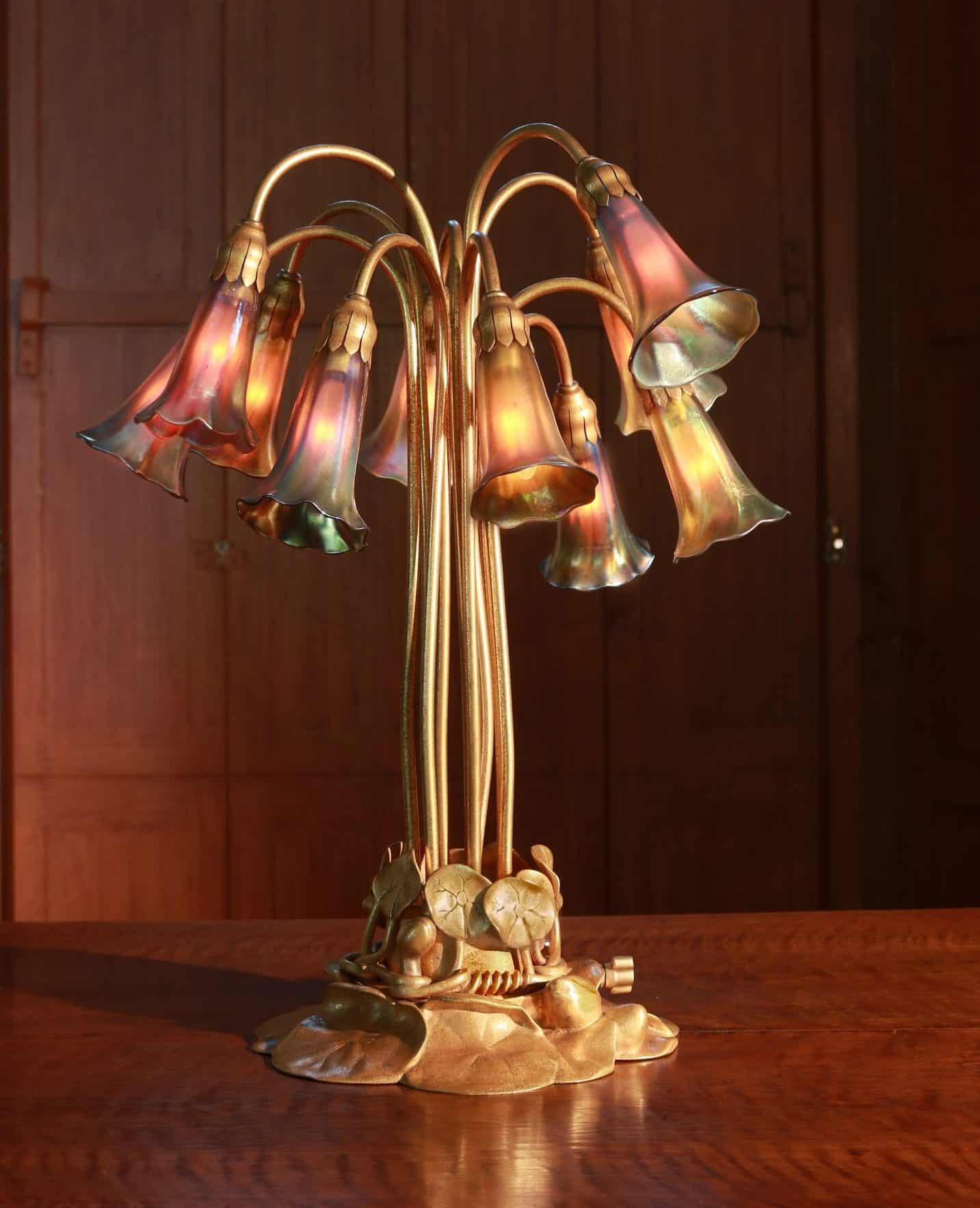 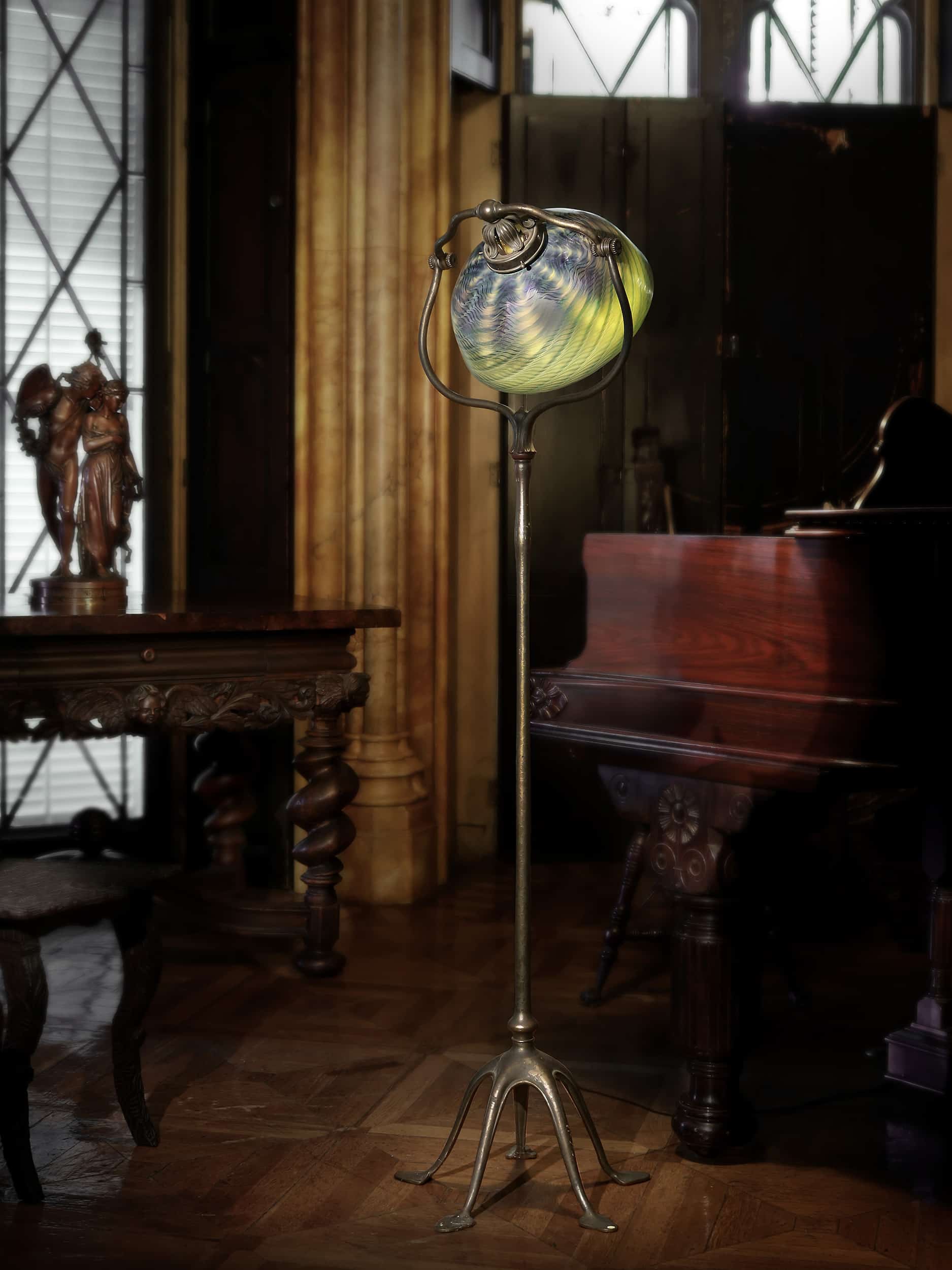 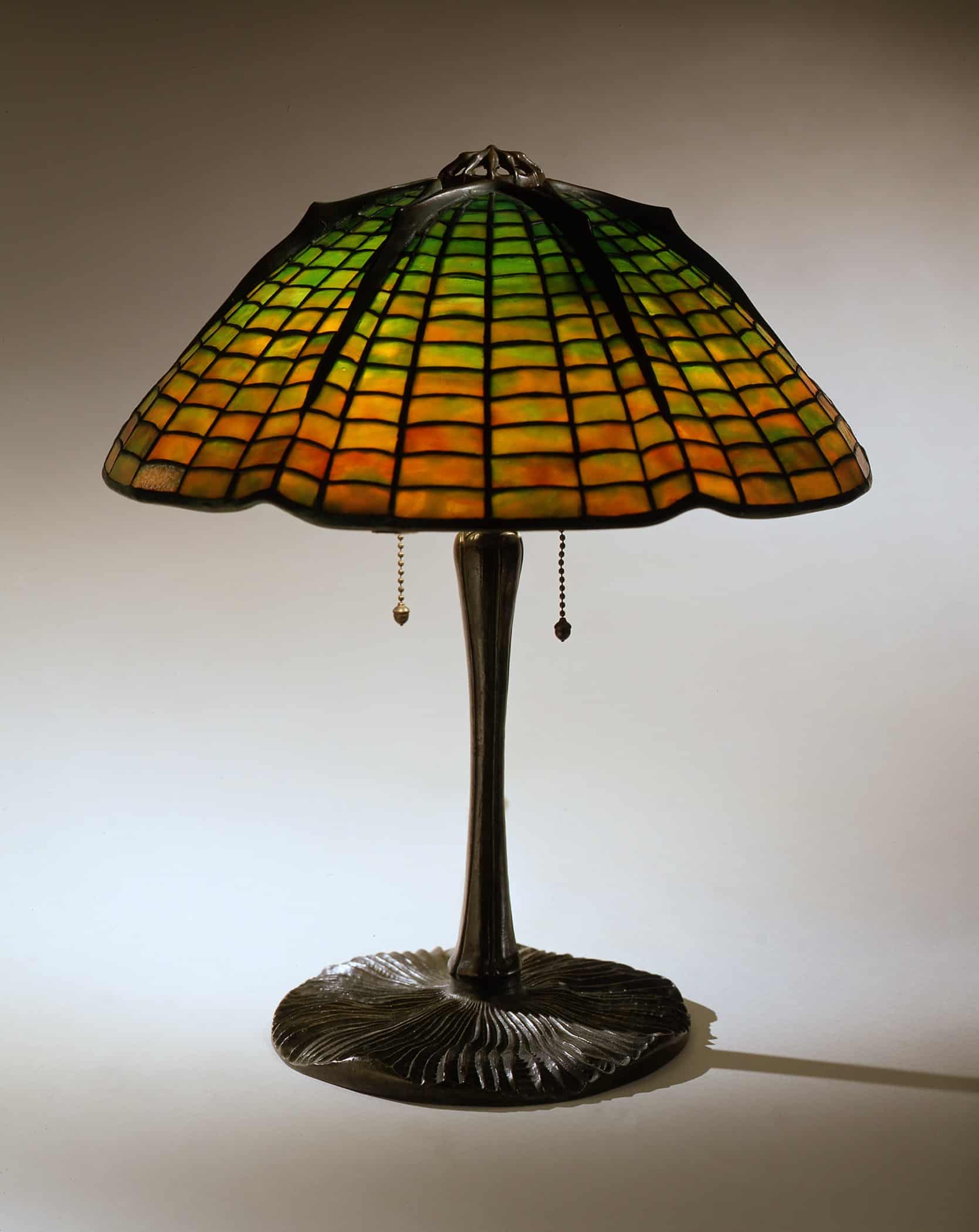 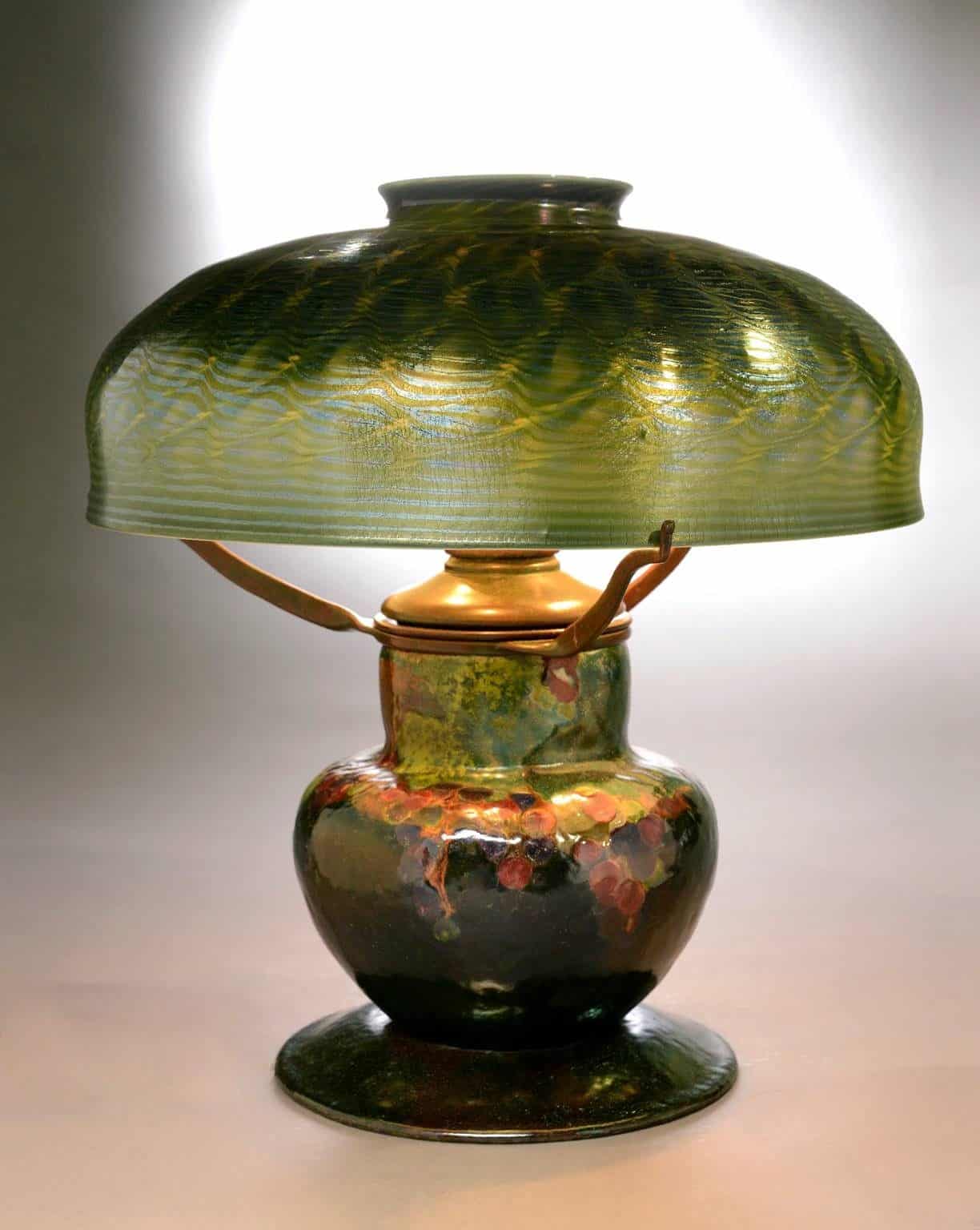 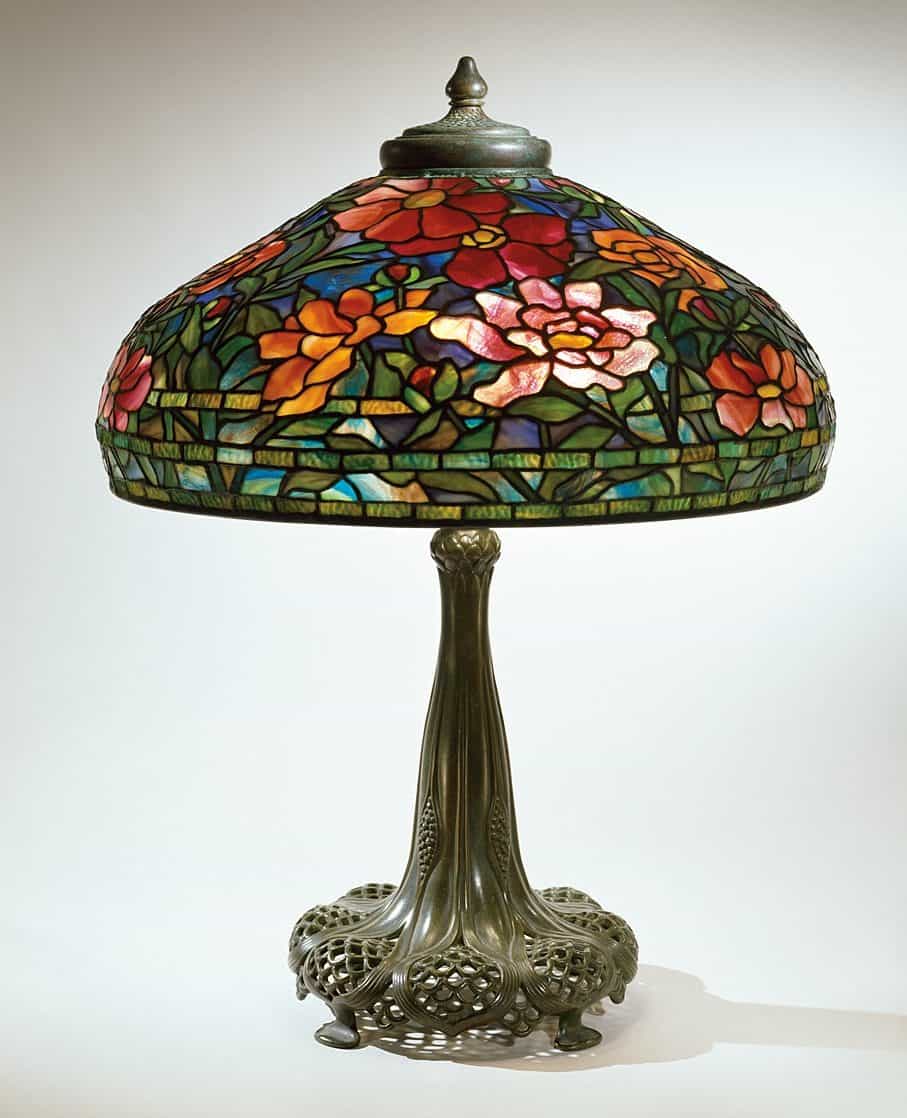 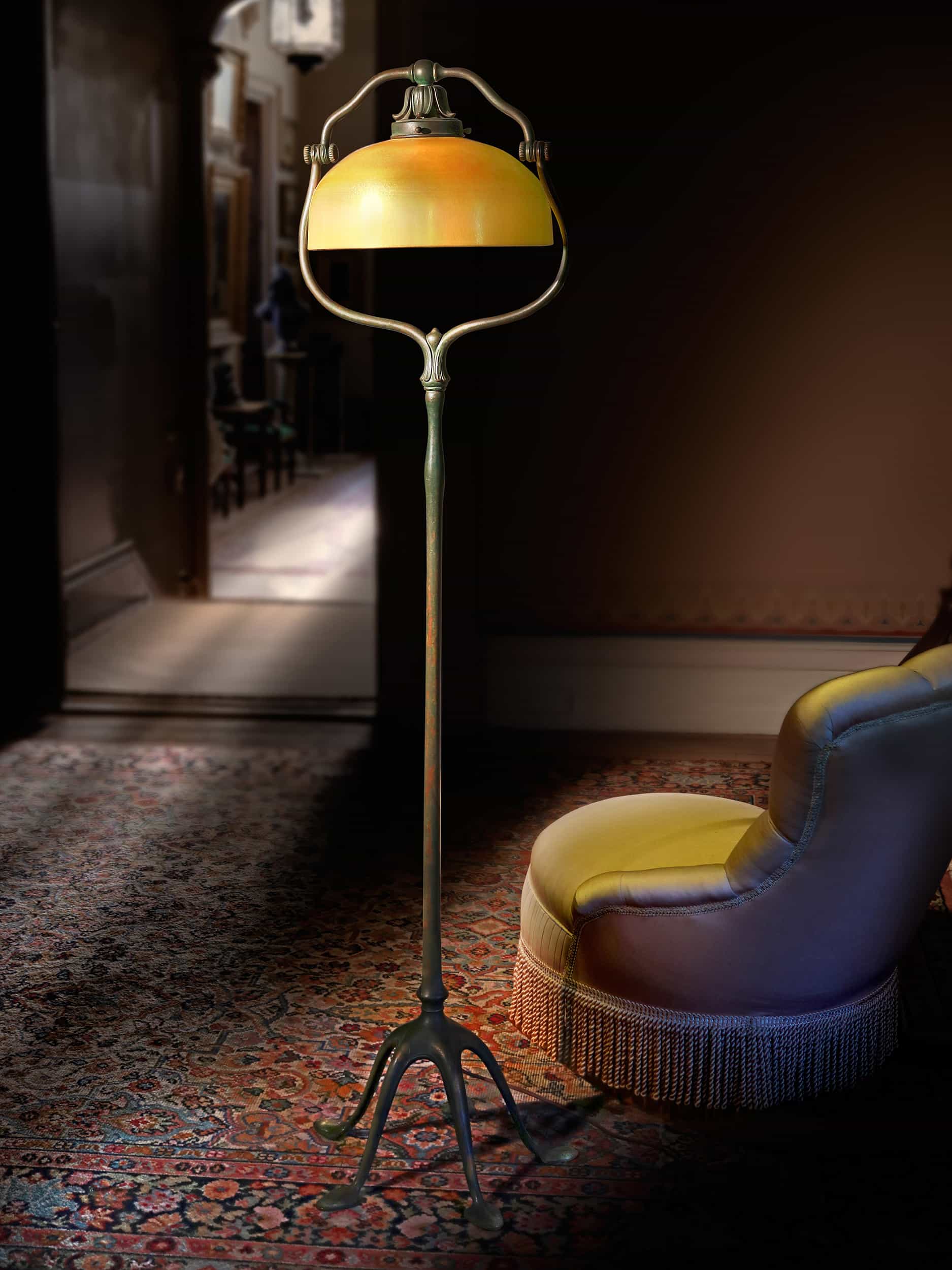 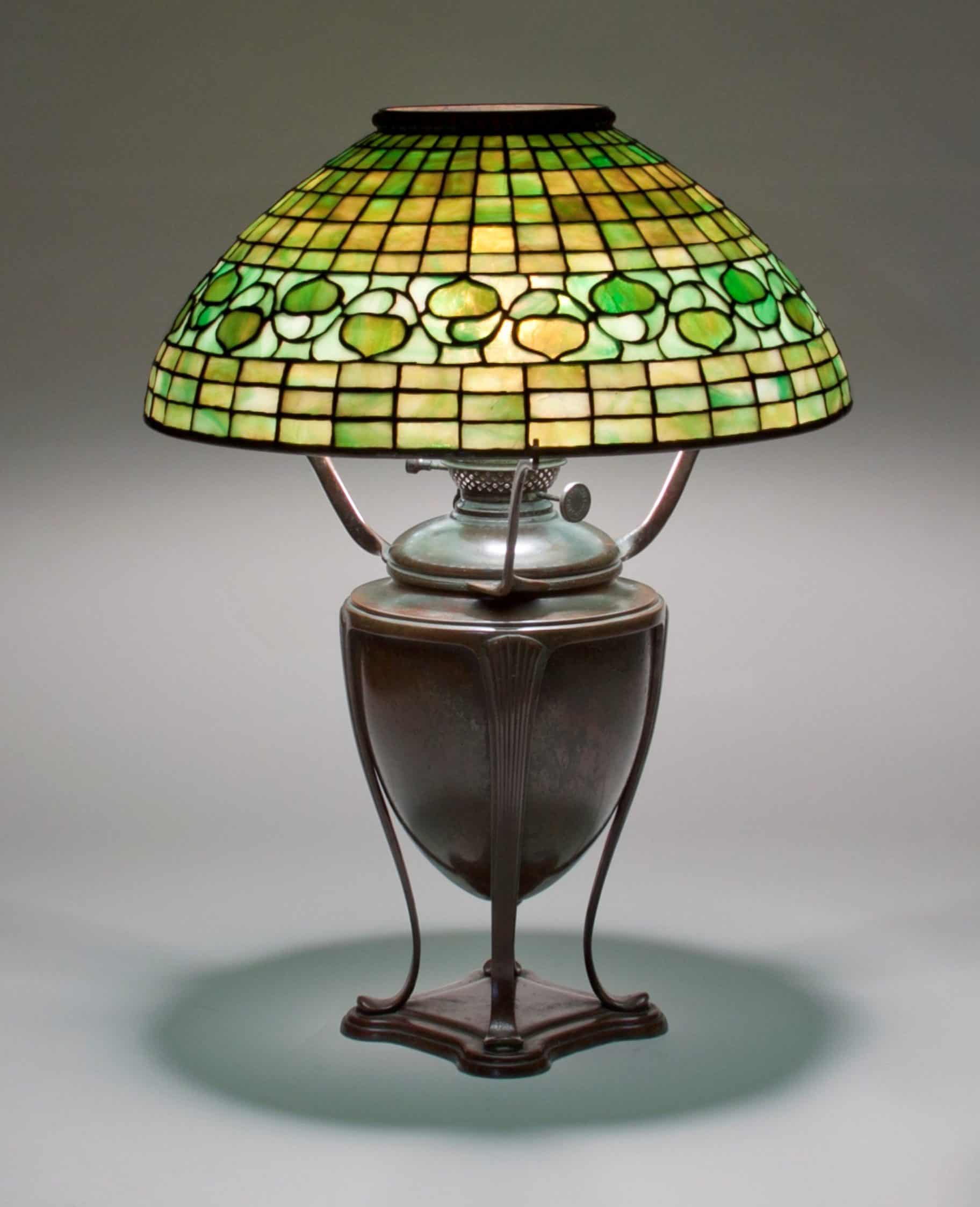 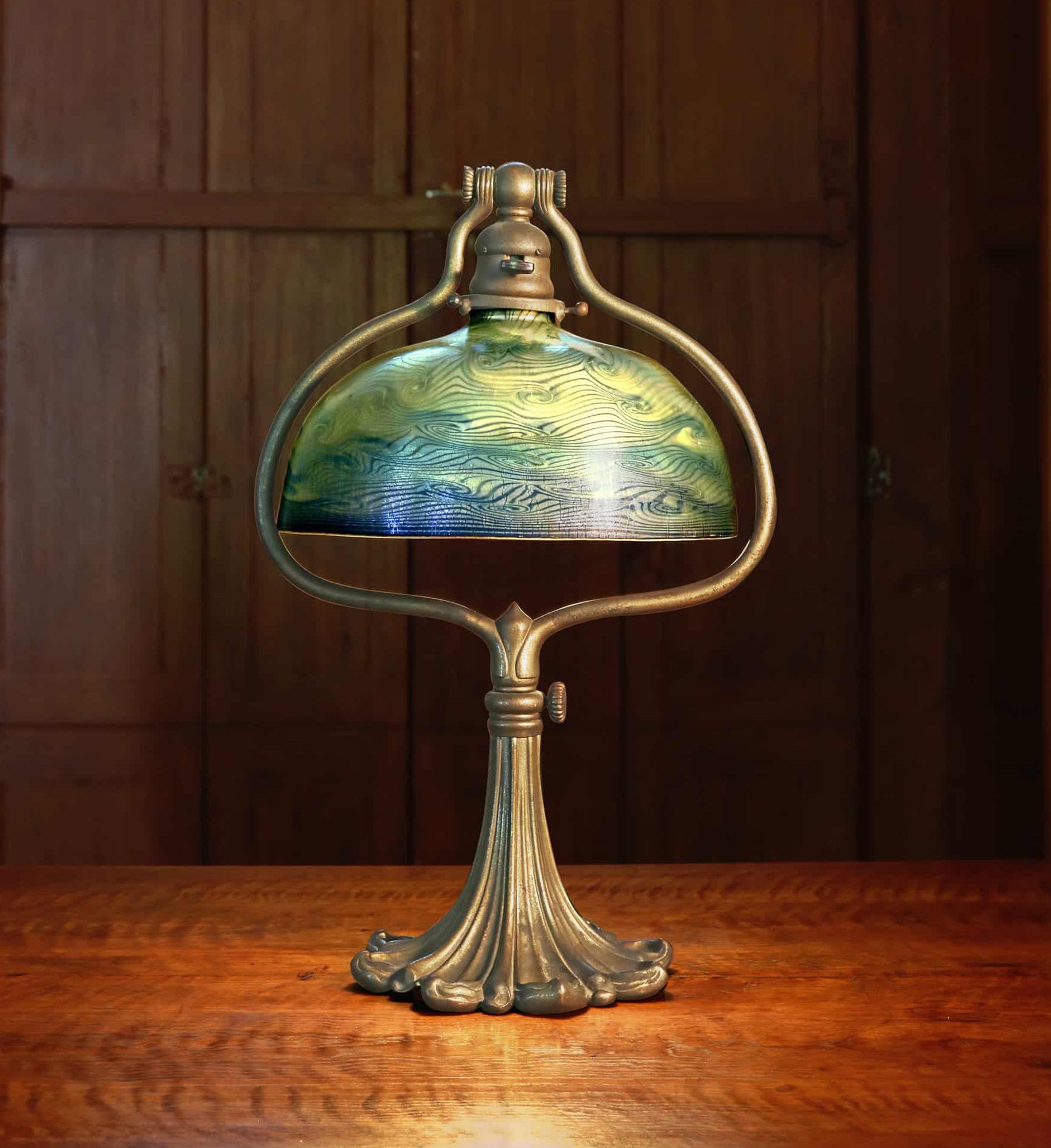 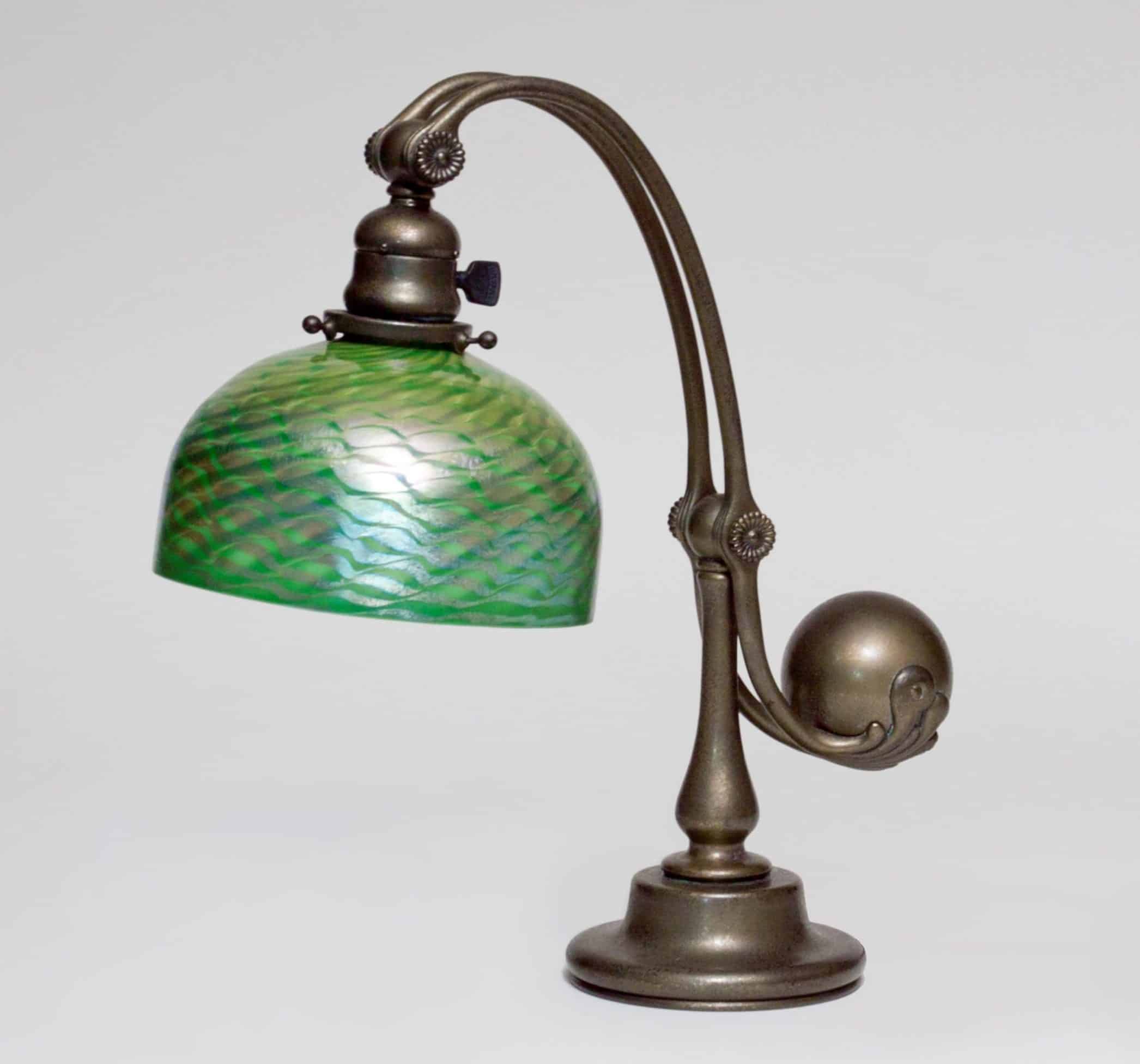 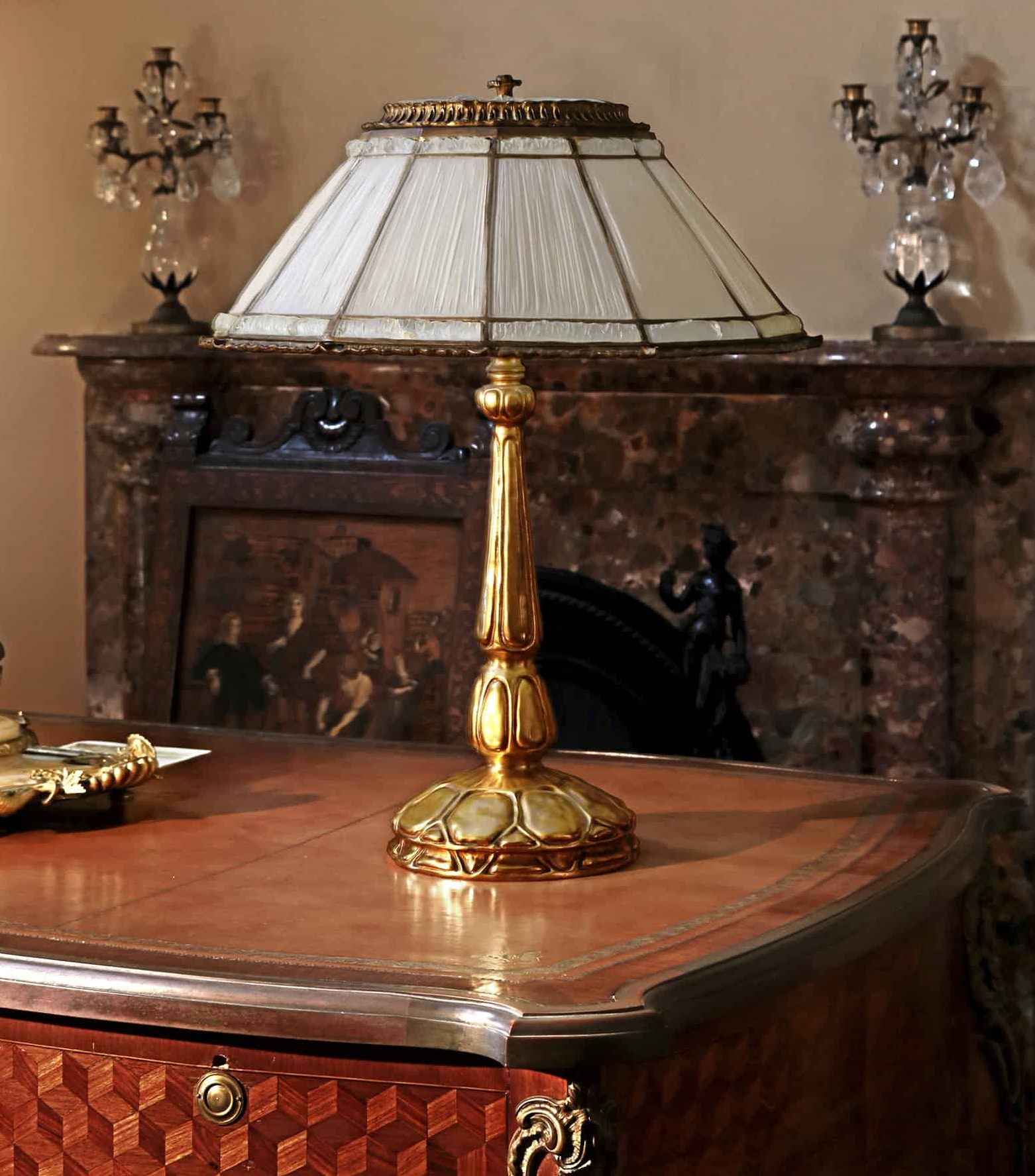