Documenting the possible relationship between Lyndhurst’s third owner Jay Gould and Louis C. Tiffany remains problematic. Gould had much of his correspondence and records destroyed upon his death, and the fire at Laurelton Hall, Tiffany’s sumptuous home on Long Island, destroyed many of his records as well. Nonetheless, Jay Gould probably knew the Tiffany family at a very early point in Louis C. Tiffany’s career. The Goulds and the Tiffanys both went to the Presbyterian Church in Irvington and in a surviving letter to the church, Helen Gould (Jay Gould’s daughter) referred to the “younger Tiffany” implying she knew both Louis C. Tiffany (who was twenty years her senior) and his father, Charles, the elder Tiffany. Anecdotally, it appears Jay Gould may have started using the services of Tiffany at the time of redecoration of Lyndhurst in about 1882.

Before Tiffany, Gould had worked extensively with the Herter Brothers. In 1880, Gould purchased both a brownstone on Fifth Avenue in New York City and Lyndhurst, then located in Irvington, New York (now Tarrytown, New York) which was, so to speak, the Greenwich, CT of the Gilded Age. At that time, William H. Vanderbilt, Gould’s Fifth Avenue neighbor and competitor, was involved in constructing a massive triple house using the Herter Brothers firm as architects and decorators. Christian Herter, the younger of the pair, led the three-year Vanderbilt project to completion in 1882 and it was supposed to be his last. However, it appears Jay Gould was able to convince the Herters to work on his two mansions, although to a lesser extent than was involved in the massive Vanderbilt project. The Gould Fifth Avenue home and Lyndhurst, the country house, were likely Christian Herter’s last major commissions before his premature death in 1883.

At Lyndhurst, the Herters clearly redecorated the parlor and likely added such touches as new fireplace surrounds and period lighting to some of the main rooms. The new Herter parlor scheme was extensively documented by photographs, and the furniture still exists in the Lyndhurst collection. Most of the parlor furniture came from the Gould’s old Fifth Avenue home and was likely designed by the elder Gustave Herter. As a part of the remodeling, a series of internal transom windows in Japonesque style, depicting peacocks and birds of paradise, were installed in the bay windows. Although there is no firm documentation as to their designer, they clearly resemble the work of John LaFarge in both motif and work of glass.

LaFarge’s working methods at the time were somewhat complicated. LaFarge was a lackluster businessman, increasingly in competition with Louis C. Tiffany, whose father was the successful businessman and founder of Tiffany & Company and who imparted strong competitive business skills to his son. Around the time of the Gould commission, LaFarge started his own decorating company which supplied designs and glass for window commissions. Sometimes the work was done with LaFarge and sometimes without him. Placing these windows firmly in either the LaFarge or his decorating company may be impossible but in design and technique, the transom windows in the Lyndhurst parlor are clearly LaFarge-esque.

Against this backdrop, Jay Gould’s patronage of Tiffany remains uncertain. The remaining windows in the house have traditionally been ascribed to Tiffany by multiple scholars and stained glass restorers. Increasingly, however, a number of experts have moved attribution into the LaFarge category. A smaller number consider the attribution too difficult to make. Thus, the strongest link of Jay Gould working with Tiffany might relate to a possible commission of the decorative floral glass still extant at Lyndhurst.

Although Tiffany may not have worked extensively with Jay Gould at Lyndhurst in the early 1880s, his Tiffany Glass & Decorating Company did provide a later memorial window for the Dutch Reformed Church in Roxbury, NY, Gould’s birthplace. The church had burned in 1892, and Gould’s wife had recently passed away. Supposedly, the church elders approached Gould about rebuilding the church just as Gould was asking Tiffany to design a memorial window for his late wife. Unfortunately, Gould died prematurely in 1892m so his contact with Tiffany would have been brief. The designs for the windows that survive at Lyndhurst are believed to have been executed by Frederick Wilson from 1893-1894, right at the start of his work for Tiffany.

In addition, a photograph survives in the Lyndhurst archive showing an early Tiffany kerosene lamp set on a Chinese bronze vase base on a center table in the Lyndhurst library (see banner image). This photograph is believed to have been taken shortly after Jay Gould’s death. The lamp may have been acquired by Jay Gould or his eldest daughter Helen as she began to update Lyndhurst. While the Jay Gould/Louis Tiffany relationship may be impossible to substantiate, it is clear that Tiffany had a lasting relationship with Helen Gould who made many purchases for both Lyndhurst and the former Fifth Avenue Mansion.

Held in a Herter Brothers frame, this is one of three transom windows placed in the Lyndhurst parlor during Jay Gould’s redecoration. They bear a close resemblance to John LaFarge’s work at the time with the decorating company he founded although no records exist that provide definitive proof. 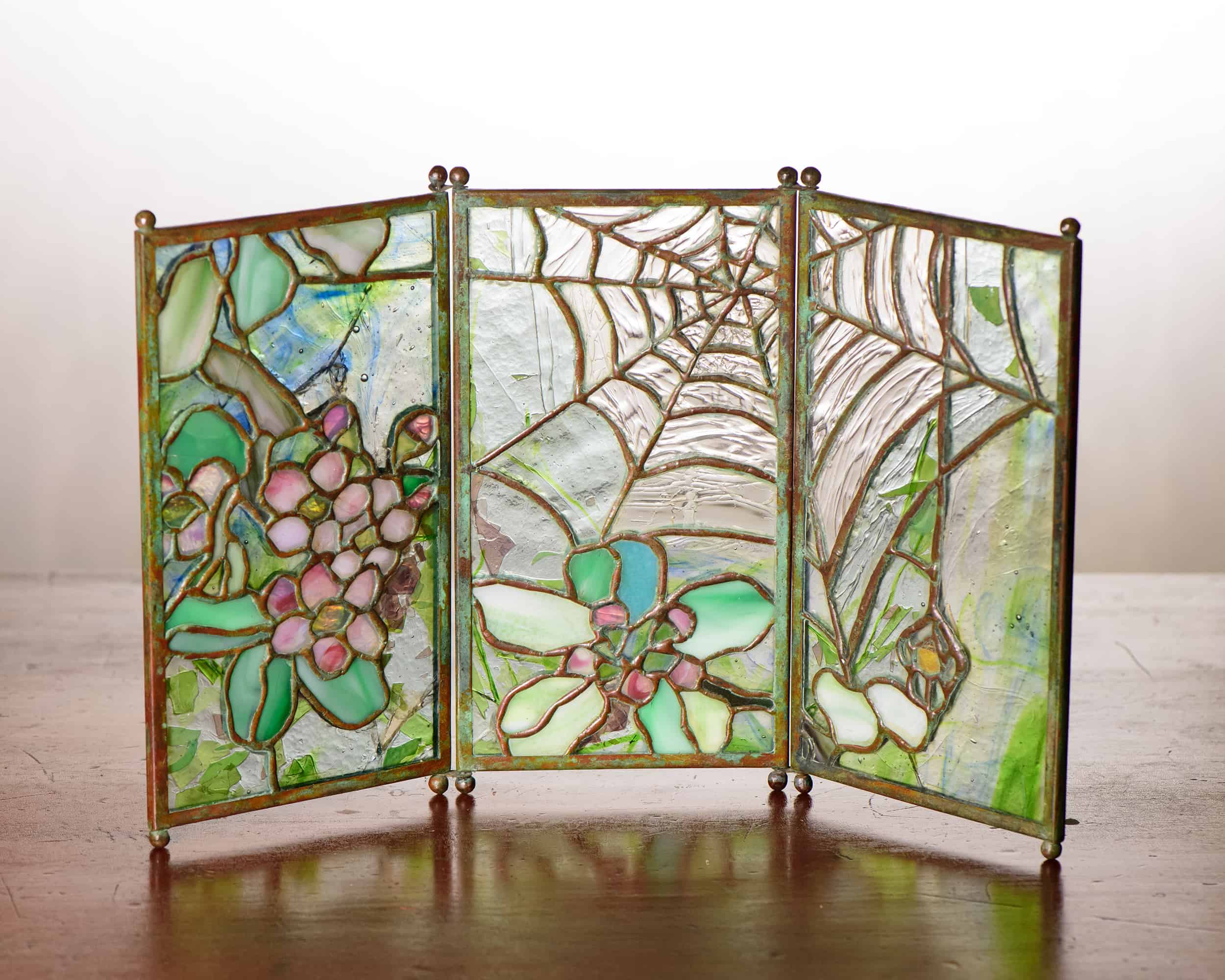 Originally part of a pair, this small glass screen was meant to conceal the burning flame underneath a silver tea pot. Tiffany made such screens in a variety of patterns of which this is the most elaborate. It is reminiscent of the patterns in Tiffany’s spectacular spiderweb lamps. 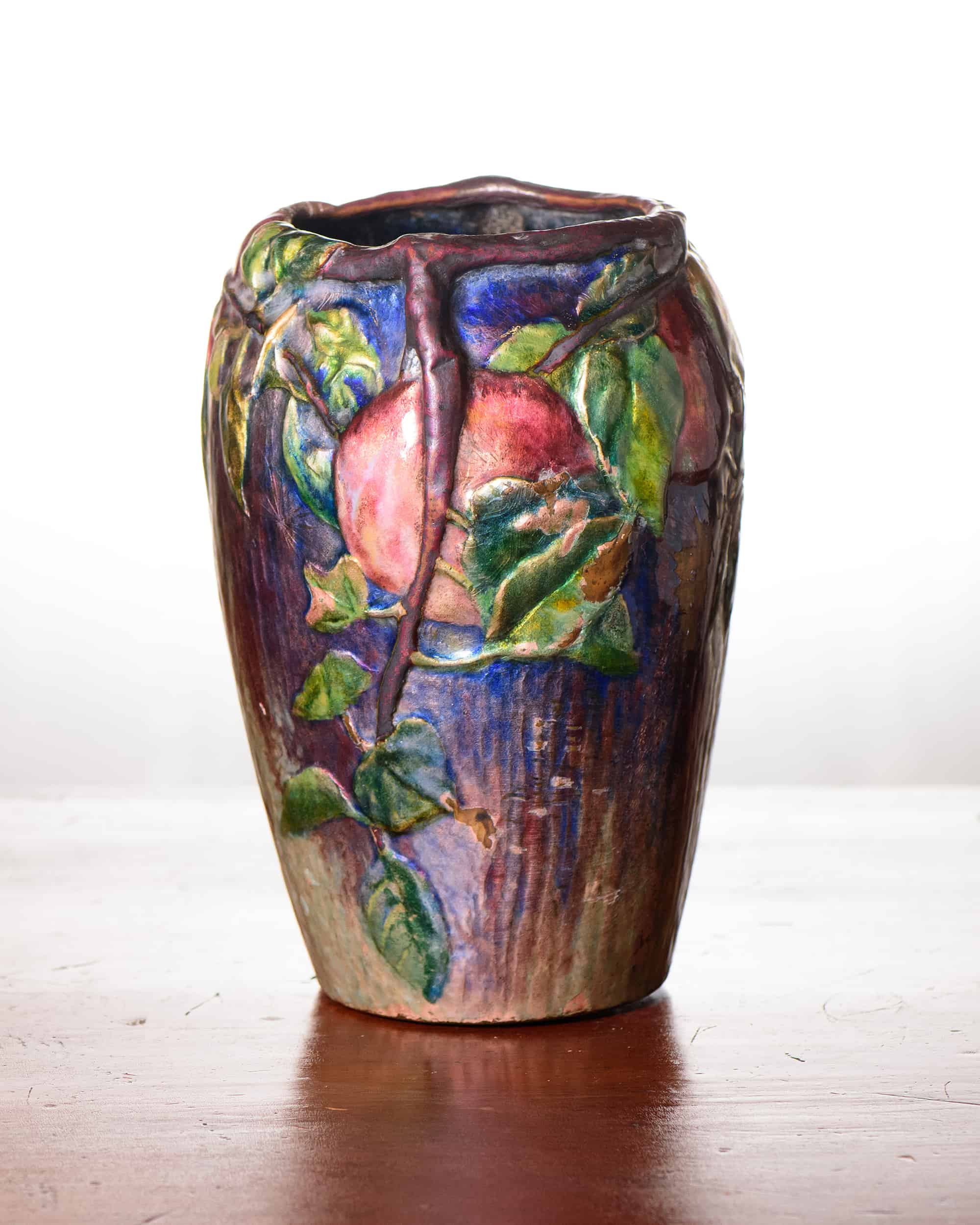 Helen Gould inherited large collections of fine and decorative arts from her father and was an aggressive collector. At the same time, like her father, Helen seems to have been attracted to pieces that were noted in the press or at exhibitions for being the finest of their type. Today this is called “trophy” collecting. While neither Jay nor Helen Gould needed to use their collections to impress their peers – neither was voraciously social – they seemed to like knowing that they were getting the best pieces. This rare enameled vase highlights Helen Gould’s penchant for purchasing fine and unique items from Tiffany. 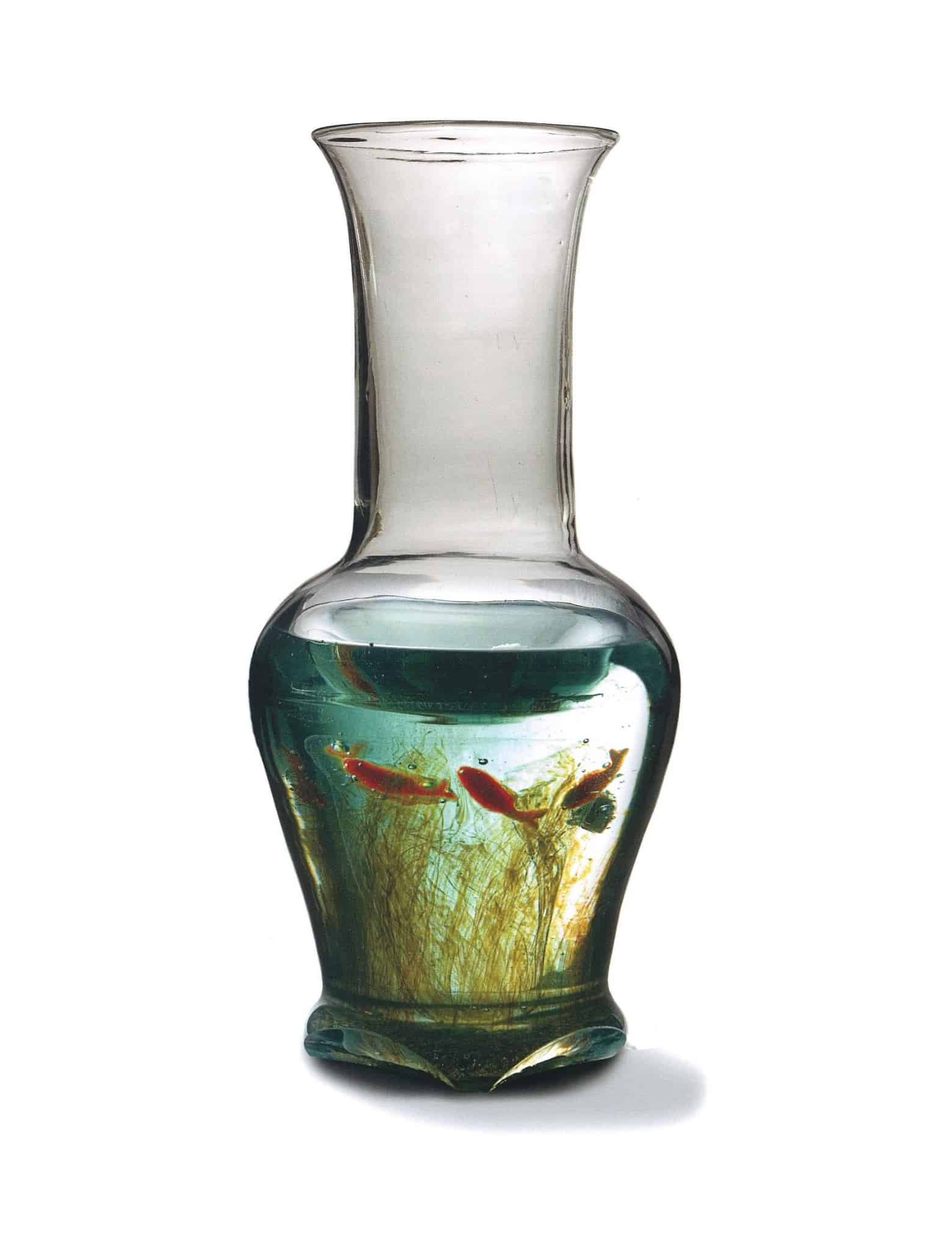 Helen Gould’s estate was sold in 1942 by the Kende Gallery at Gimbel Brothers Department Store. Although the sales catalog descriptions of most lots are cursory and few pieces are pictured, it is clear that Helen Gould owned both an aquamarine goldfish vase and an aquamarine lily vase. The simple description of the former vase reads, “Ovoid vase with high flaring neck and circular foot, the interior made to simulate goldfish in water. Height 10 1/4 inches.” A similar aquamarine vase with a high neck came on the American auction market approximately a decade ago. This example, one of the largest made, comes from a collection formed by Joseph Briggs, Tiffany’s mosaic studio foreman and later financial manager of Tiffany Studios after Louis C. Tiffany’s retirement from the business. It is unclear whether this was a deliberate collection or simply fine examples that were remnant when the business closed. This is perhaps the largest and most impressive example of these complicated vases. 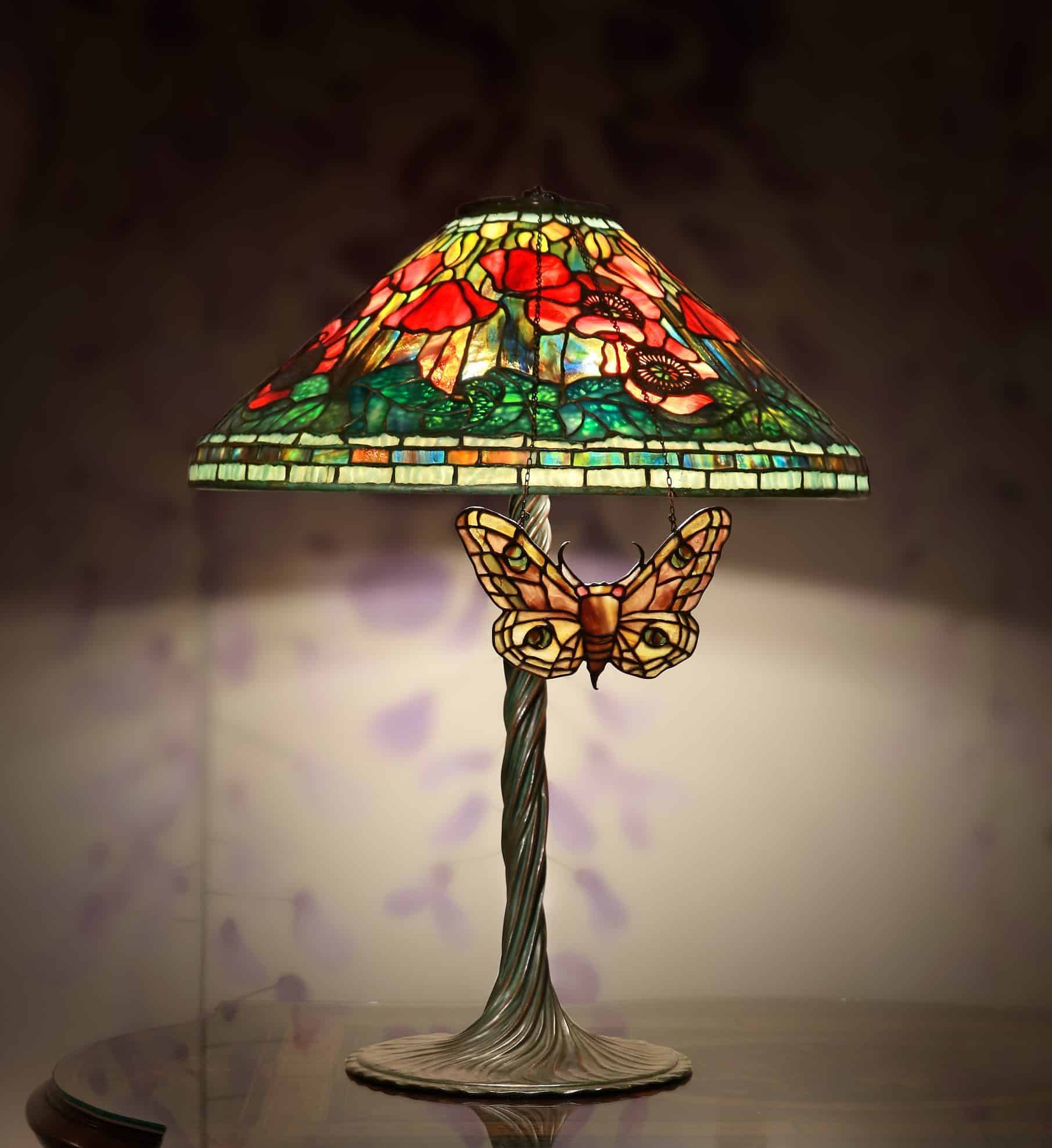 Helen Gould often updated her Fifth Avenue mansion by retrofitting old gas fixtures with Tiffany glass shades. Gould also purchased lamps from Tiffany Studios for Lyndhurst of which some remain in the collection. This moth-shaped screen was hung from a lamp similar in shape to the poppy lamp shown here. The electric light bulb was considered so bright that these stained glass screens were used to prevent glare for eyes used to reading by gaslight. Unfortunately, an appropriately sized Tiffany lamp for such a screen no longer exists in the Lyndhurst collection.

Perhaps the most dramatic alteration that Helen Gould made to the decor of her Fifth Avenue mansion, originally installed in the 1880s by her father Jay Gould, was the addition of a monumental leaded-glass window from Tiffany Studios at the end of the home’s entry hall. While the scene of a doe drinking from a stream is seemingly naturalistic, it is a visualization of a passage from the Psalms, “As my hart panteth after the water brooks, so panteth my soul after thee, O God” (Psalm 42:1). Gould was deeply religious and the biblical allusion would have appealed to her. 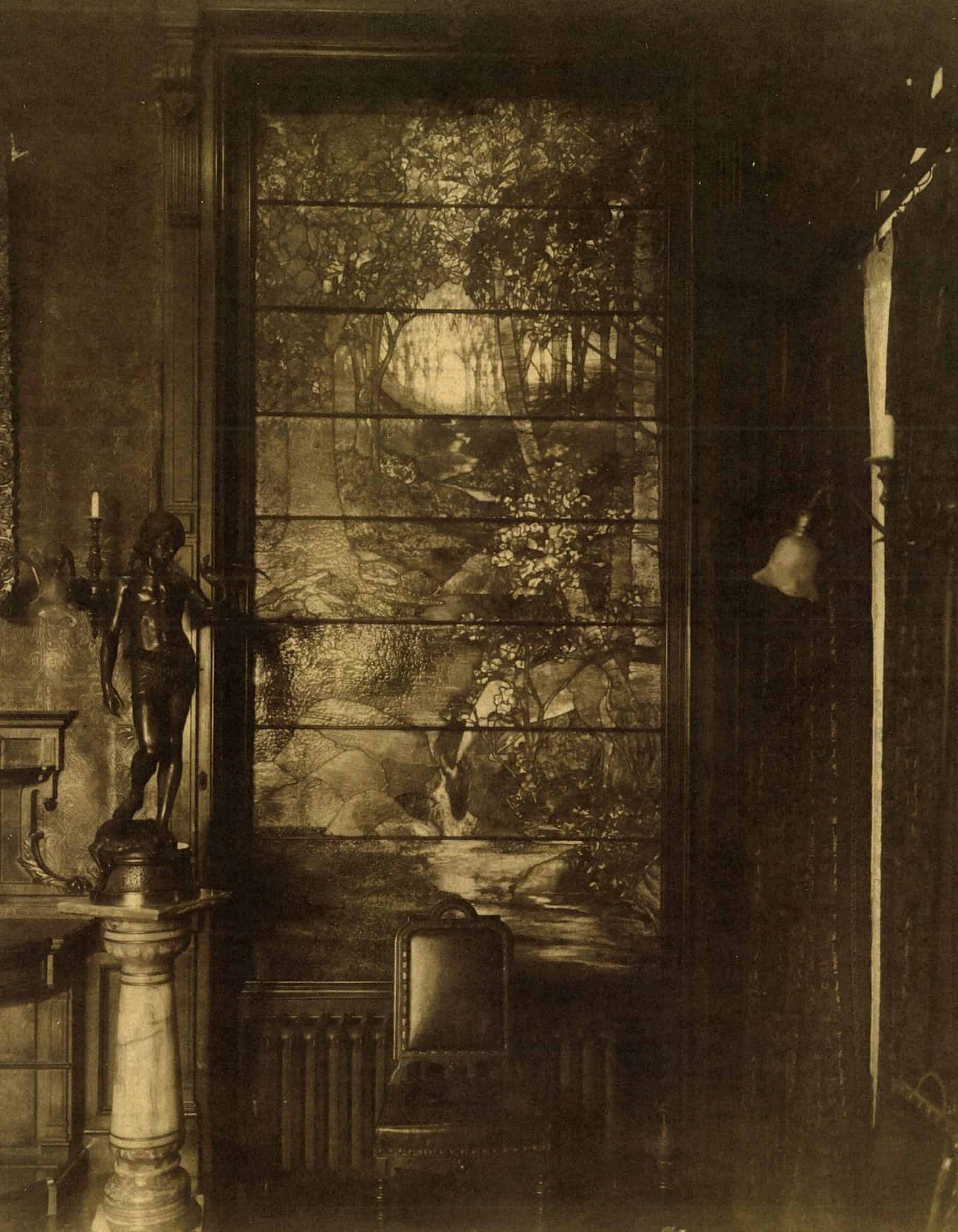 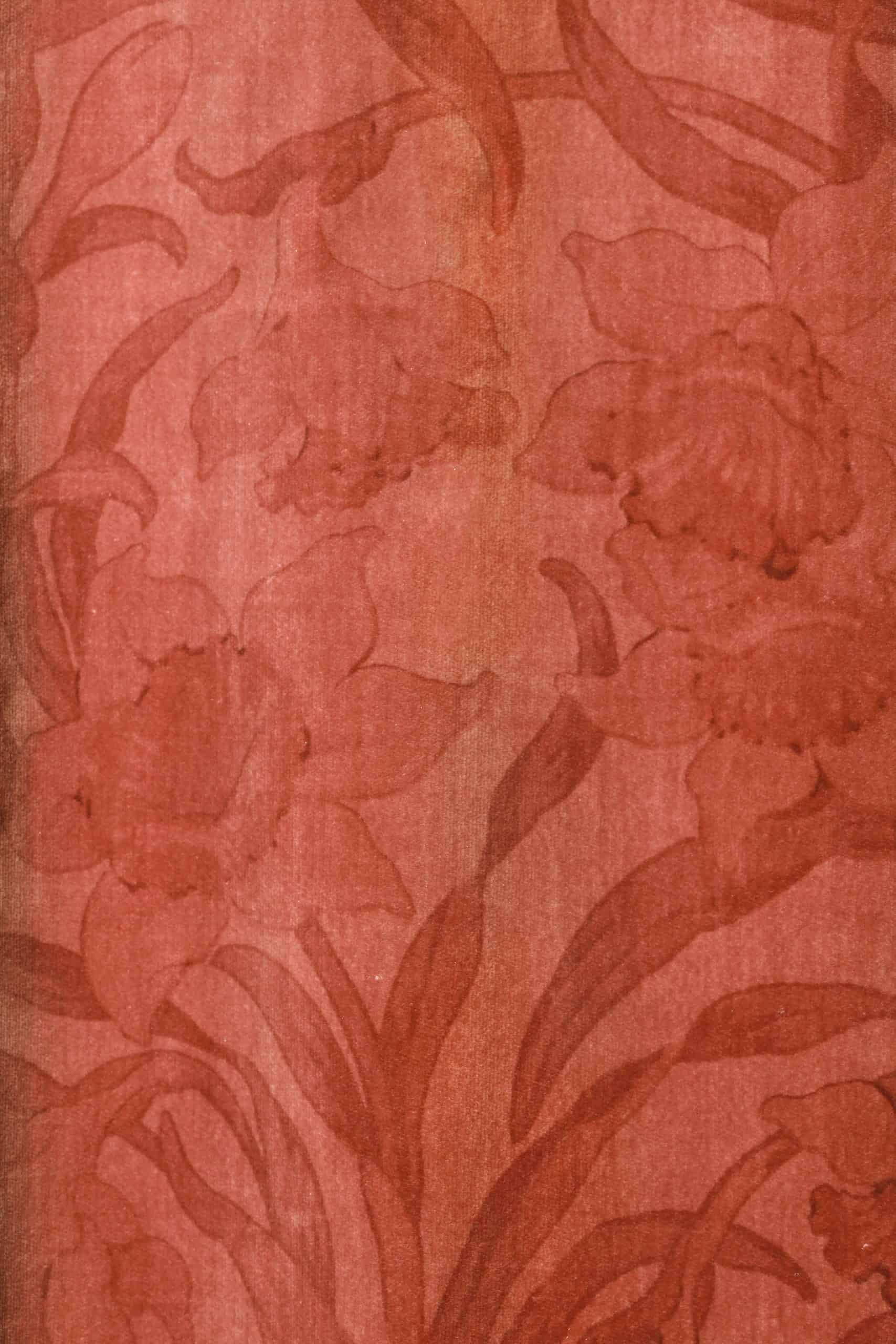 Gould’s landscape window was massive, close to 10 feet high, and the reproduction in the exhibition was shown at half size. It was displayed with Candace Wheeler portieres and a Herter Brothers Japonesque table from the Lyndhurst collection, this mise-en-scene recreates Gould’s interiors, a mix of long out-of-fashion decor combined with the latest in work from Tiffany. 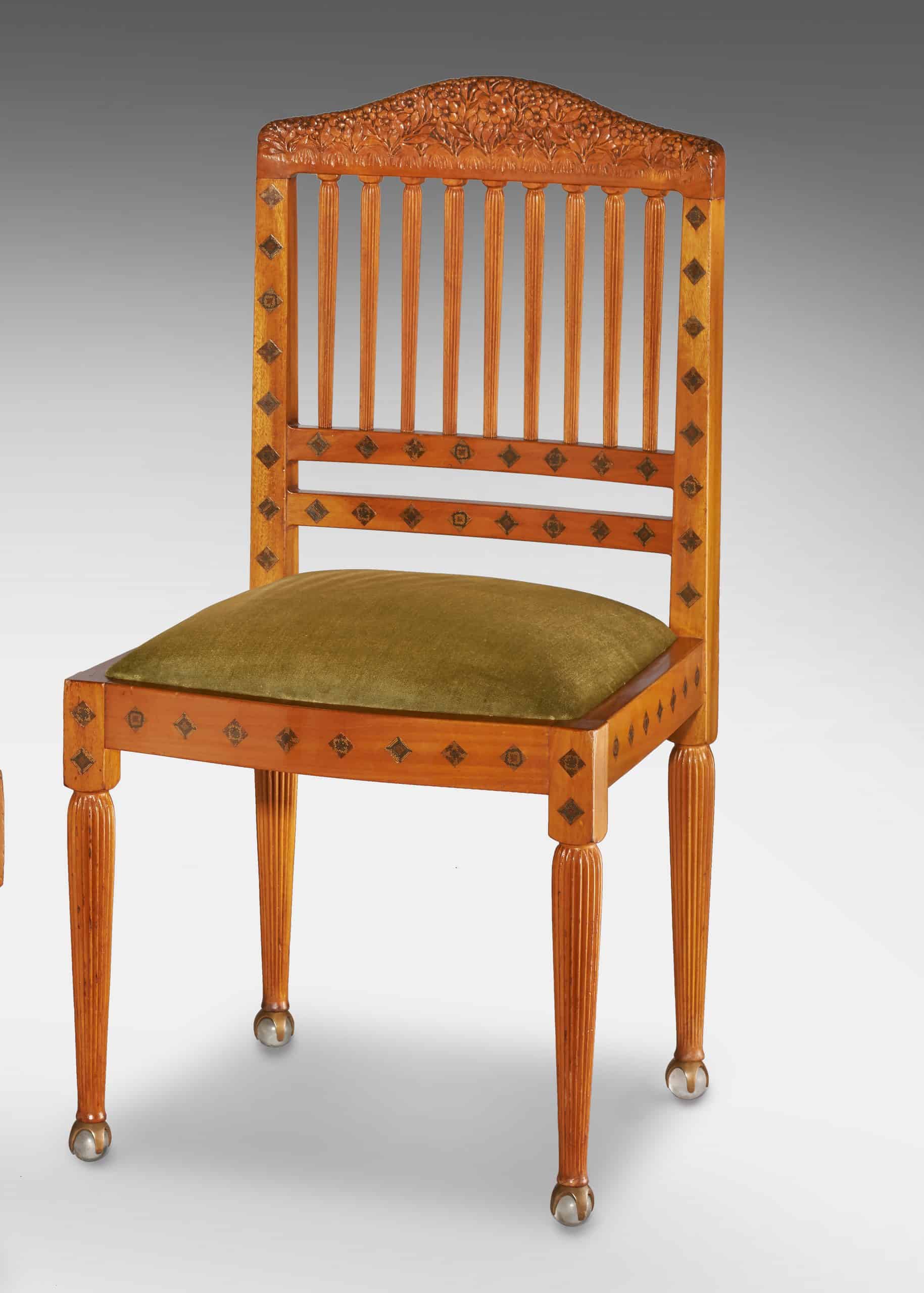 While Helen Gould was happy to live with the decorations installed by her father at both Lyndhurst and Fifth Avenue, other New York collectors employed Tiffany to do complete redecorations of their homes. This unusual chair comes from the home of Henry and Louisine Havermeyer, noted art collectors whose Old Masters and Impressionist paintings are among the finest holdings in the Metropolitan Museum of Art’s collections. The Havermeyers employed Tiffany and Colman in 1891 to decorate their East 66th Street residence. The micromosaic decoration of this chair relates closely to the inlaid Japanese lacquer owned by the Havermeyers. Chairs with similar inlay were made for the Havermeyer Japonesque music room and sitting room and exist in a number of museum collections. This chair may have been maid for a second-floor sitting room. It displays the refined orientalist aesthetic that Tiffany would introduce to the American public at the 1893 World’s Columbian Exposition. 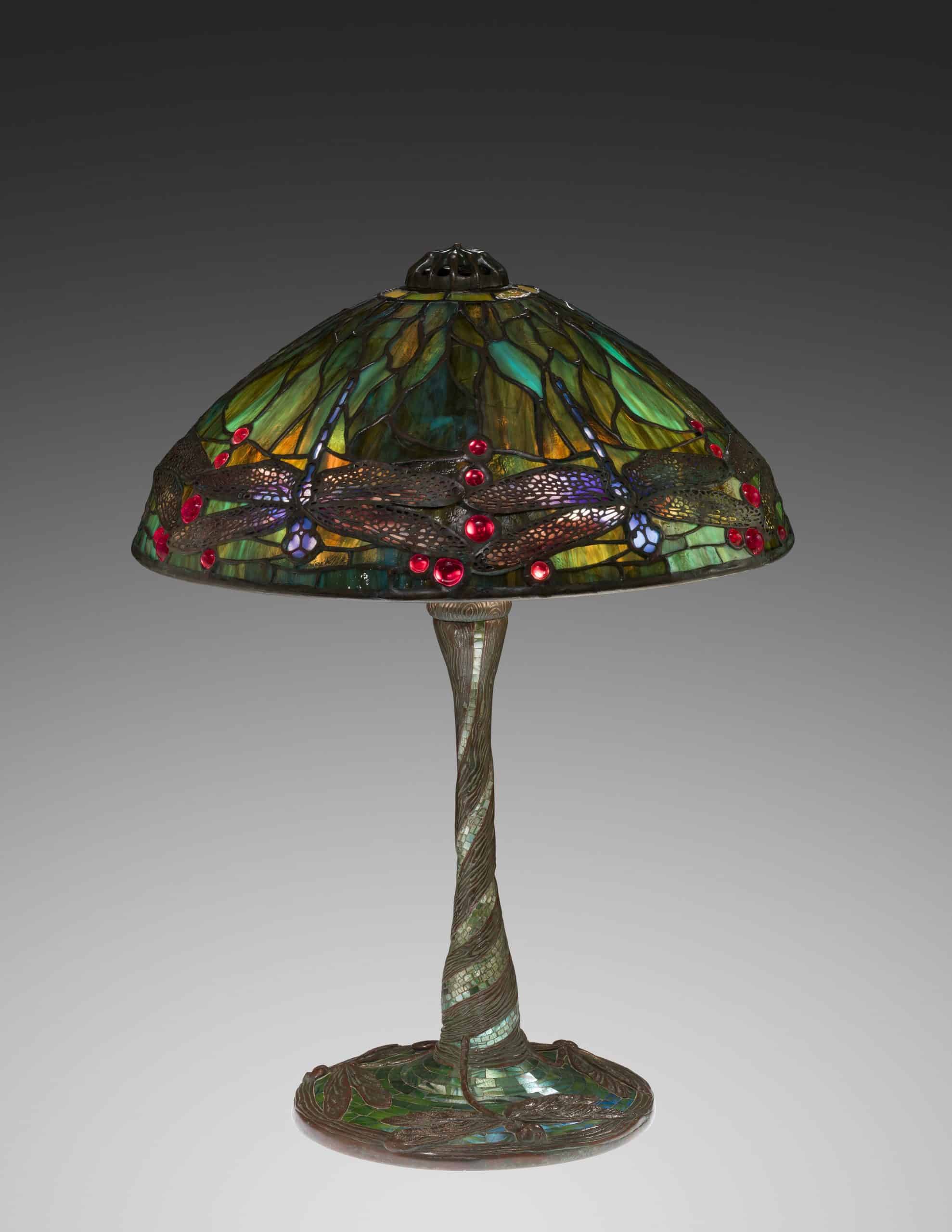 With the electrification of her mansion on Fifth Avenue and Lyndhurst, Helen Gould was quite content to retrofit gas light fixtures from the 1880s with Tiffany shades meant for new electric lighting. In one of the Fifth Avenue bedrooms, Gould updated an Aesthetic Movement gas chandelier by adding simple favrile glass shades to the six upright gas sconces while replacing the hanging pull-down reading lamp segment of the fixture with a large dragonfly shade otherwise meant for a chandelier.