William Paulding, who first hires Alexander Jackson Davis to design Lyndhurst, is a former general of the War of 1812, a former New York City mayor, and has married into a branch of one of the five wealthiest families in New York City. His villa is supposed to serve as a comfortable place for his retirement. Davis’ concept for Lyndhurst-called ‘Knoll’ by the Pauldings-is to have a gothic style villa on a rocky outcropping overlooking the Hudson River. This was an incredibly novel approach considering that most important houses of the period were being built in the Greek Revival style. While it is clear that William Paulding pays all the bills for the construction of the mansion, it seems that his son Philip primarily works with Davis on the development of architectural plans and furnishings.

Davis not only designs the exterior of the mansion and its landscape but also makes more than fifty furniture designs and either designs or specifies all the interior finishes. Original drawings for four pieces of parlor furniture that still remain at Lyndhurst are in the Avery Library of Columbia University.

Although no period photographs of the room survive (the design predates photography), the Paulding parlor was recreated in 2006 based on the death inventories and paint analysis. The earliest pieces of furniture in the house were gathered into the parlor as the most likely original furnishings. The sensibility is far more masculine and English than displayed by the later owners. Although Philip Paulding is clearly cognizant of the impact of the design on his female visitors-as indicated by surviving correspondence- the overall design of the parlor and the house is derived from English Gothic and Tudor styles and has a distinctly masculine appearance. It is quite possible that the wall treatment of the parlor is slightly softer and less castle-like than the faux stone walls of the other rooms, a concession to the ultimately feminine aspect of the parlor.

The furniture in the parlor is among Lyndhurst’s finest and clearly contains Davis’ masterpieces; a pair of cane seated wheel back chairs. While the wheel back of the chairs would seem a unique creation to Davis, such chairs exist in Georgian and Federal examples, although less common than straight back or shield examples. 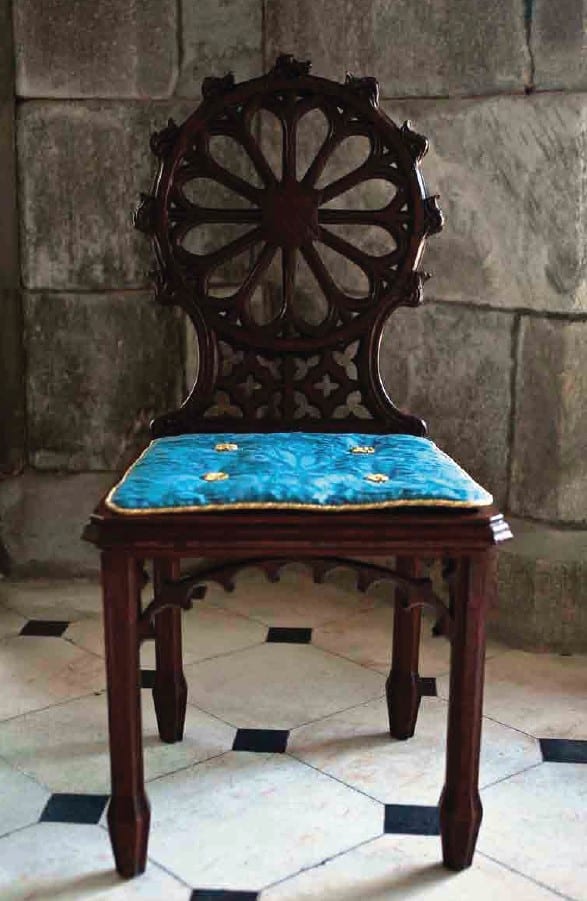 Often considered among Davis’ finest work, these wheel back side chairs draw from a rare form seen in both English and American 18th-century furniture. A drawing dated 1841 for a chair of this style as well as for a center table and pointed side chair is in the collection of the Avery Library of Columbia University. The penciled note on the drawing indicates that this piece was intended for the parlor at Knoll (the Paulding’s name for Lyndhurst). 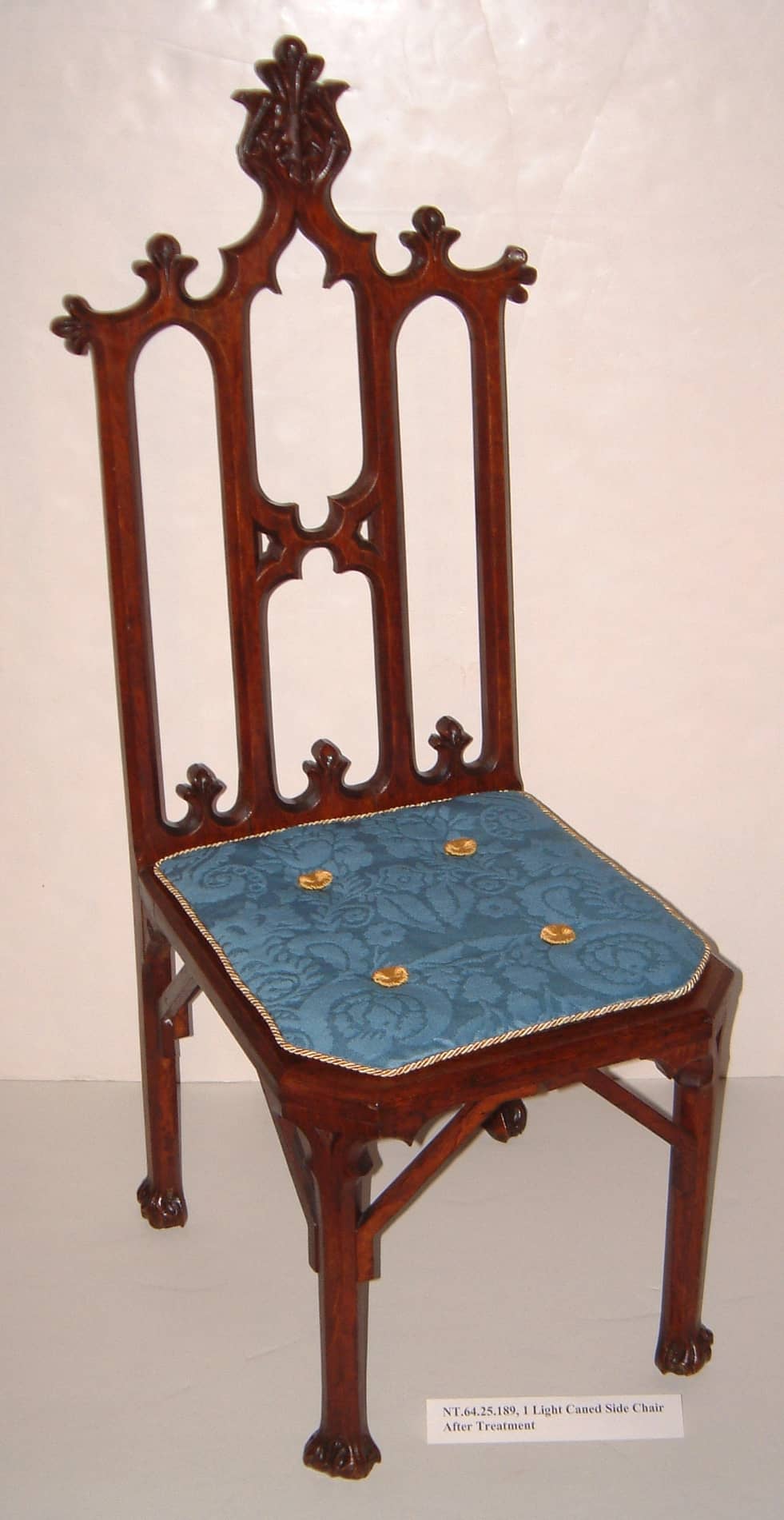 Like the wheel back chairs, these side chairs are depicted in a drawing by Davis in the collection of the Avery Library of Columbia University. Both of the wheel and pointed chair have a caned seat making them easily moveable within the parlor. 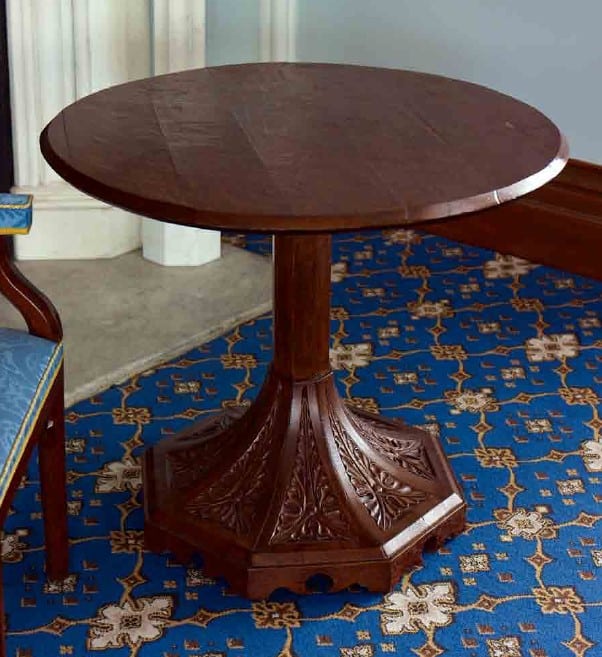 A Carved Center Table in the Gothic Revival Style, c. 1842

Another piece depicted in the pencil drawing by Davis with the wheel back and pointed chair,is this center table is distinguished by the repeated carved leaf motif on the base. This motif appears in other variants on furniture, fireplace mantels, and in the ceiling treatment of the second-floor picture gallery. Davis unites the furniture he designs to the mansion by using similar designs and motifs in furniture, decorative elements, and on both interior and exterior walls. 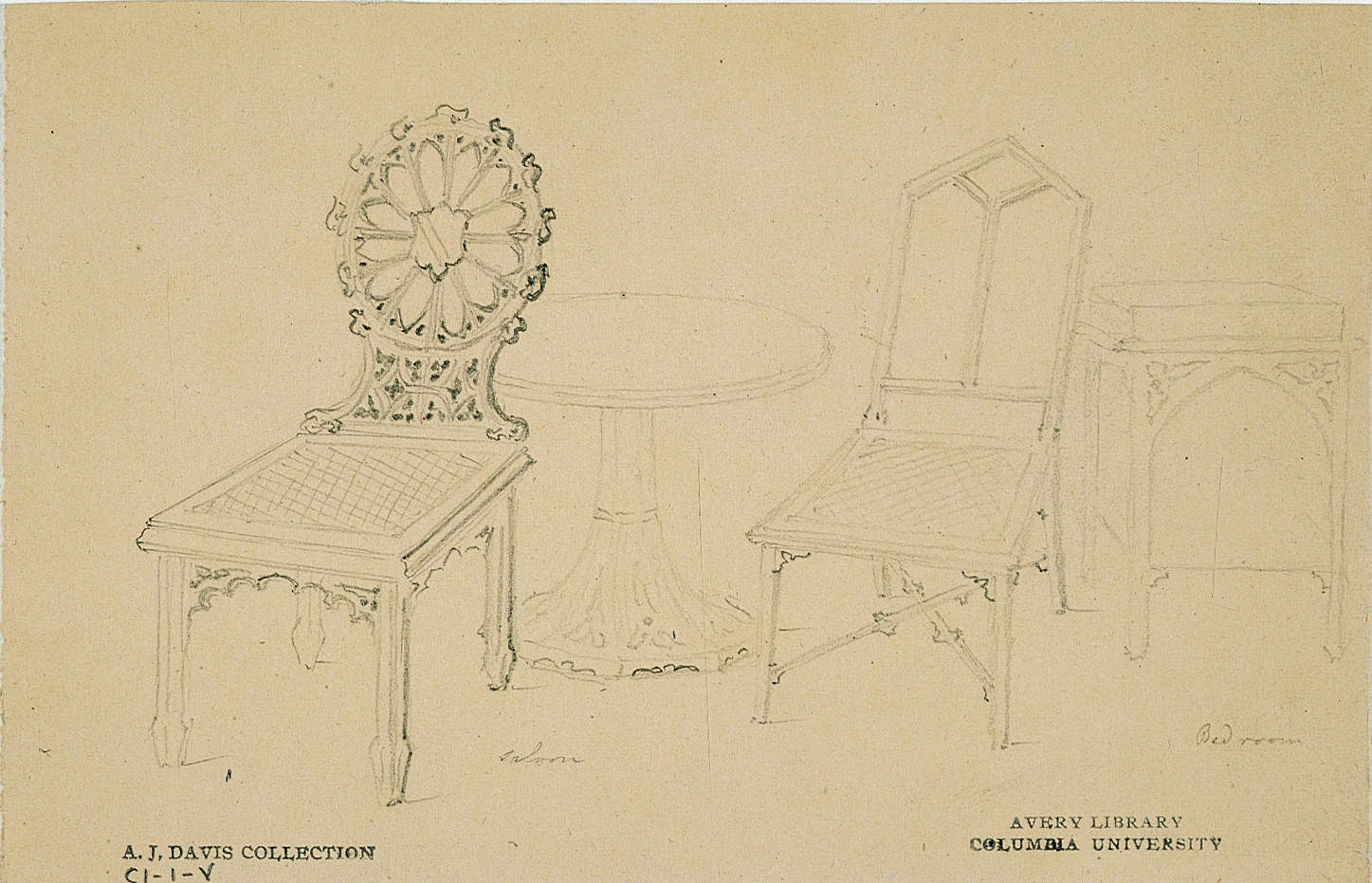