by Roberta A. Mayer

The young Louis Comfort Tiffany was familiar with the refined collection of rare and exotic objects assembled by Tiffany & Company silversmith Edward C. Moore. His later interest in the decorative arts paralleled his professional development and self-presentation as a painter. Tiffany took his first residence and studio at the YMCA at East Twenty-Third Street and Fourth Avenue in December 1869. The decor evolved with his travels through Europe and North Africa. Tiffany was deeply influenced by the richly appointed artistic studios he had seen in Paris; as a student, he recalled visiting the studio of Leon Auguste Adolphe Belly. During another trip to Paris in 1874, he saw the stunning and exotic Salon of Oriental Art created by Albert Groupil (brother in law of Jean-Leon Gerome) at 9 Rue Chaptal at the Hotel Groupil.

As he was fashioning his studio, Tiffany also became fascinated with contemporary hand-embroidered textiles through Candace Wheeler. At the Centennial Exhibition, Wheeler saw the booth hosted by the Royal Society of Art Needlework, an organization based in London at the South Kensington School, and she became interested in their work. In 1877, she established the Society of Decorative Art in New York, and Samuel Colman, Lockwood de Forest, and Tiffany briefly participated in support of the effort. Soon, Tiffany began to realize that there was a potential market for artistic decorating, especially with the growing wealth that heralded the Gilded Age, and with the cachet of the Tiffany name, family support, and social connections, he was poised for instant success.

Over the next two years, he created formal business partnerships with Wheeler for textiles and with de Forest for the importation of carpets, decorative objects, and woodwork from Egypt and India. Tiffany also subcontracted with many other artists as he began to offer custom interior designs that were like nothing else in New York. This highly creative phase of Tiffany’s career leads to the founding of Louis C. Tiffany & Company, Associated Artists.

At the outset of his decorating career, Tiffany rejected historicism as a guiding principle and instead embraced eclecticism and exoticism. He turned discarded wallpaper printing rollers and blocks into interior architecture and furniture – a remarkable novelty that foreshadowed the upcycling that is now common in the early decades of the 21st century. Taking inspiration from Moorish Spain, he used cast plaster as an architectural ornament; it was enlivened with reflective paint and embedded with luminous glass. He found many uses for architectural salvage and beautifully carved teakwood that de Forest had imported from India. Tiffany’s chimneypieces featured hand-painted tiles, opalescent pressed glass, or translucent mica screens. His decorative paintings of turkeys, pumpkins, and gourds were also part of the mix. Likewise, Tiffany’s most obvious transition from oil painting to “painting with glass” occurred in these years.

Many of Tiffany’s earliest clients for interiors were friends and family, but his sphere of influence spread rapidly with the connections facilitated by his father and by the publicity generated by the press. He was the color consultant for James Steele MacKaye’s Madison Square Theatre, as well as the designer of two embroidered drop curtains (after the first one was destroyed in a fire after only two weeks). By 1882, Louis C. Tiffany & Company, Associated Artists, was hired to decorate the White House for President Chester A. Arthur, and the demand for his artistic design skyrocketed after that.

The firm of Louis C. Tiffany & Company, Associated Artists was dissolved in 1883. Wheeler then started her own textile business using the name “Associated Artists.” Tiffany continued to recognize and develop his later businesses, including Tiffany Glass & Decorating Company (1892-1900) and culminating with Tiffany Studios (1902-32), which offered a wide variety of luxurious decorative objects, trademarked favrile glass, textiles and furnishings, as well as design services. Tiffany’s international reputation as an artist-entrepreneur was well established by the time that Jay Gould, and, later his daughter Helen Gould, commissioned exceptional work that would privately and publicly memorialize the Gould Family. 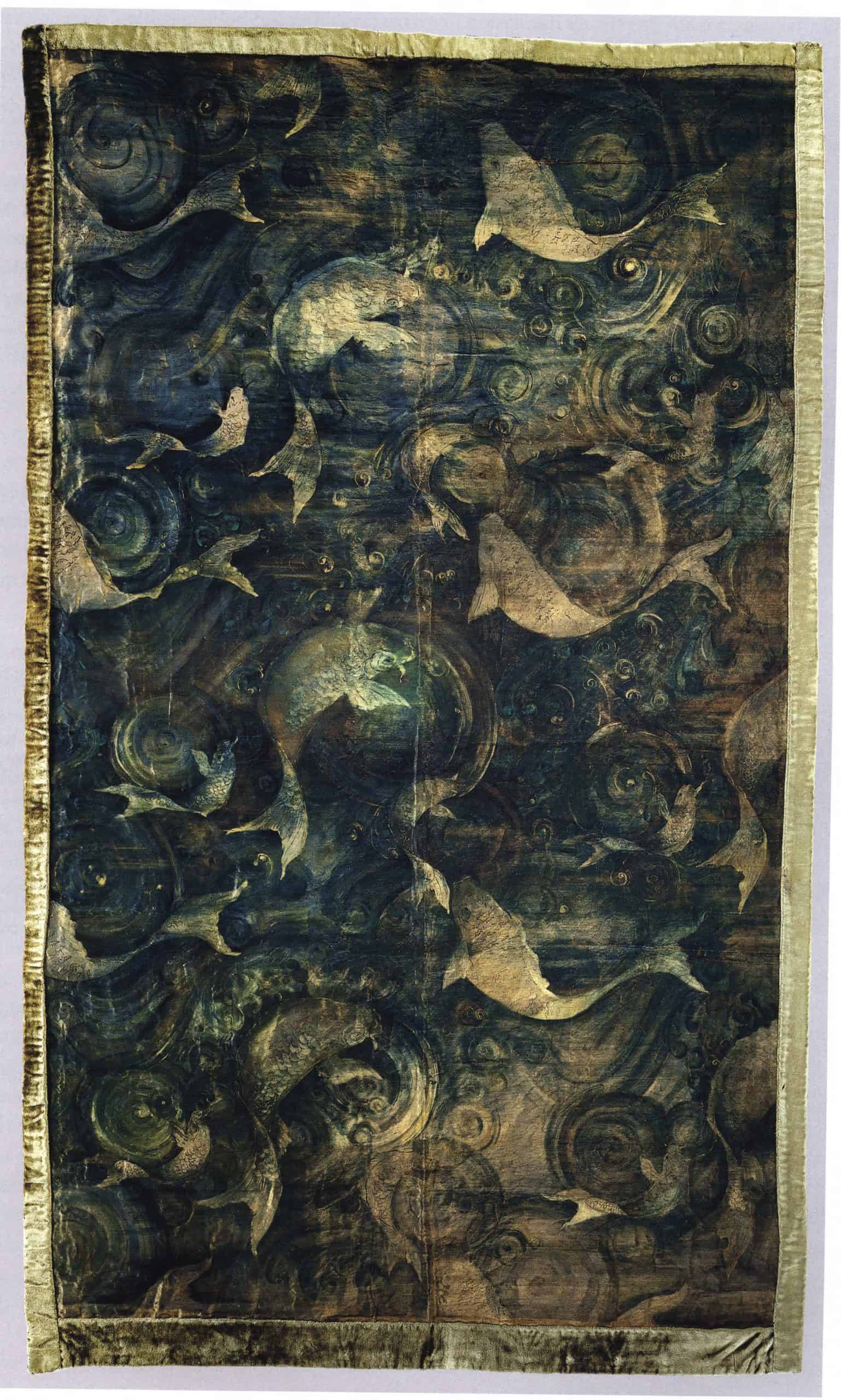 Louis C. Tiffany, Candace Wheeler, Lockwood de Forest, and Samuel Colman played key roles in the short-lived firm of Louis C. Tiffany & Company, Associated Artists, and maintained a long working and personal relationship after the business was dissolved. By 1883, Wheeler had started her own company to provide embroideries and decorative work with the corporate name Associated Artists. This swimming carp design was one of the firm’s first patterns, and it was inspired by Japanese designs as translated by European interpreters. This is one of the few non-floral designs produced by Associated Artists. An impressive range of other pieces was produced by Wheeler’s firm, including simple denim furnishing fabrics, table covers and runners in printed floral velveteen, and striking portieres and floor screens that incorporated printed fabrics and oil painting. 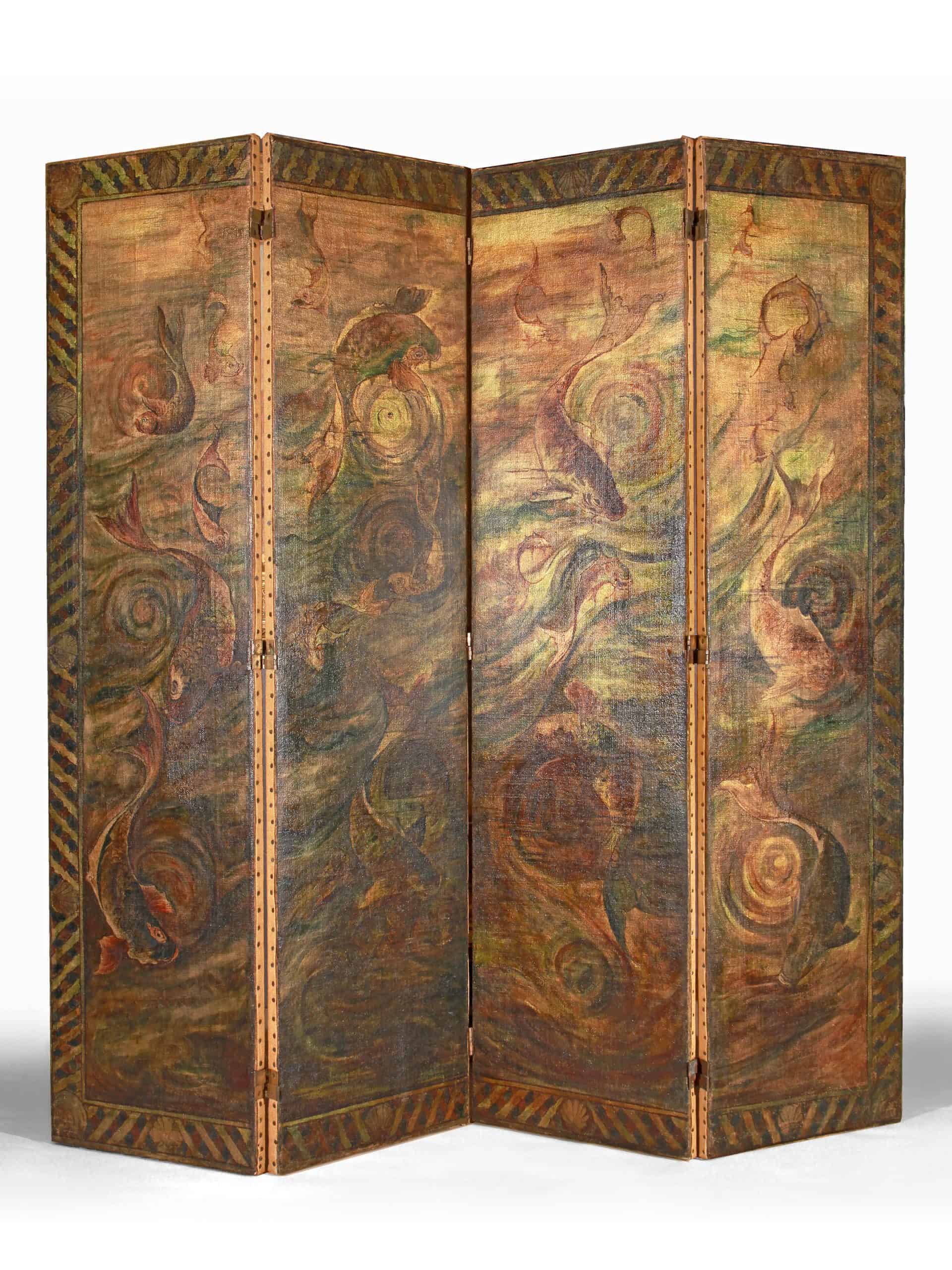 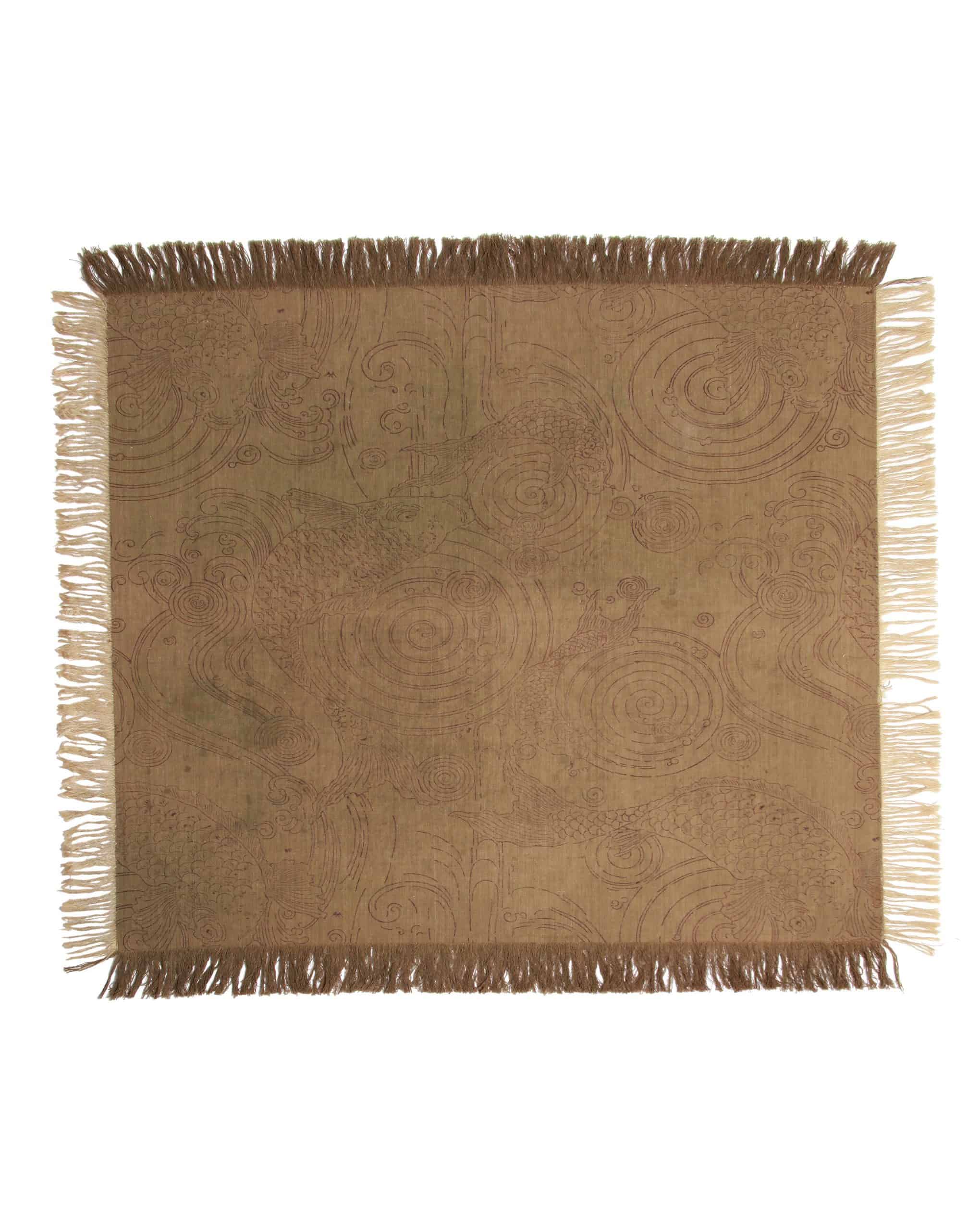 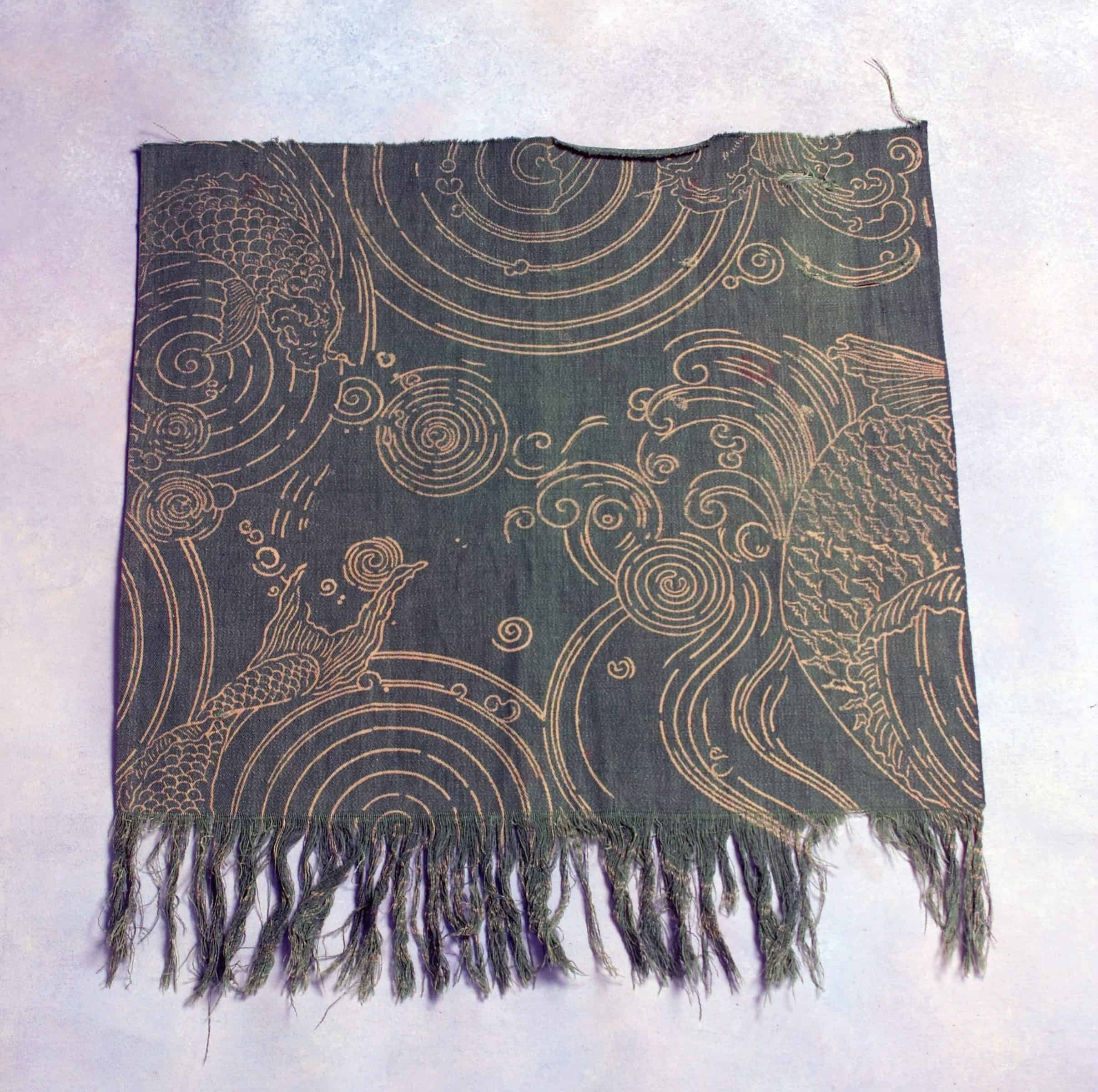 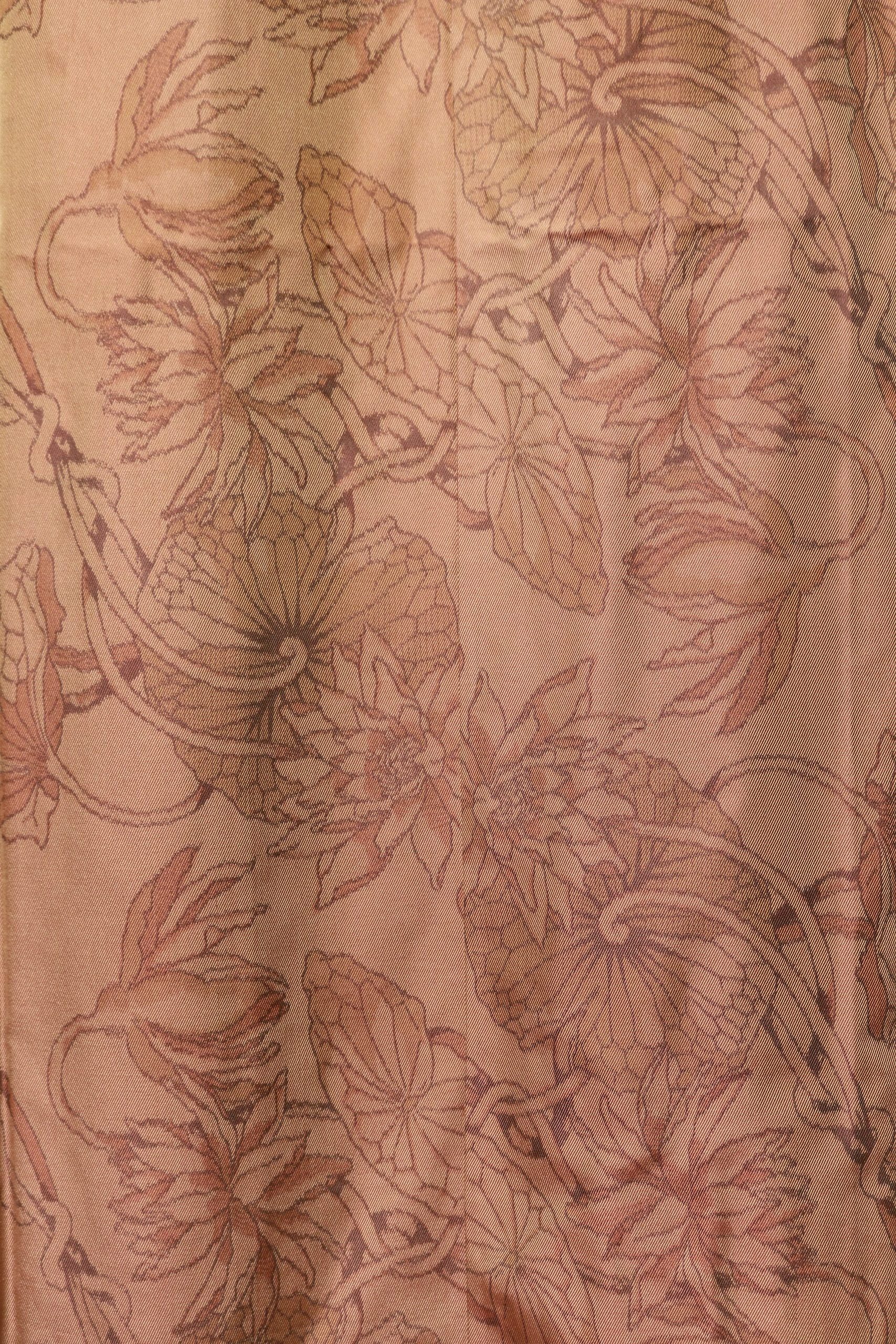 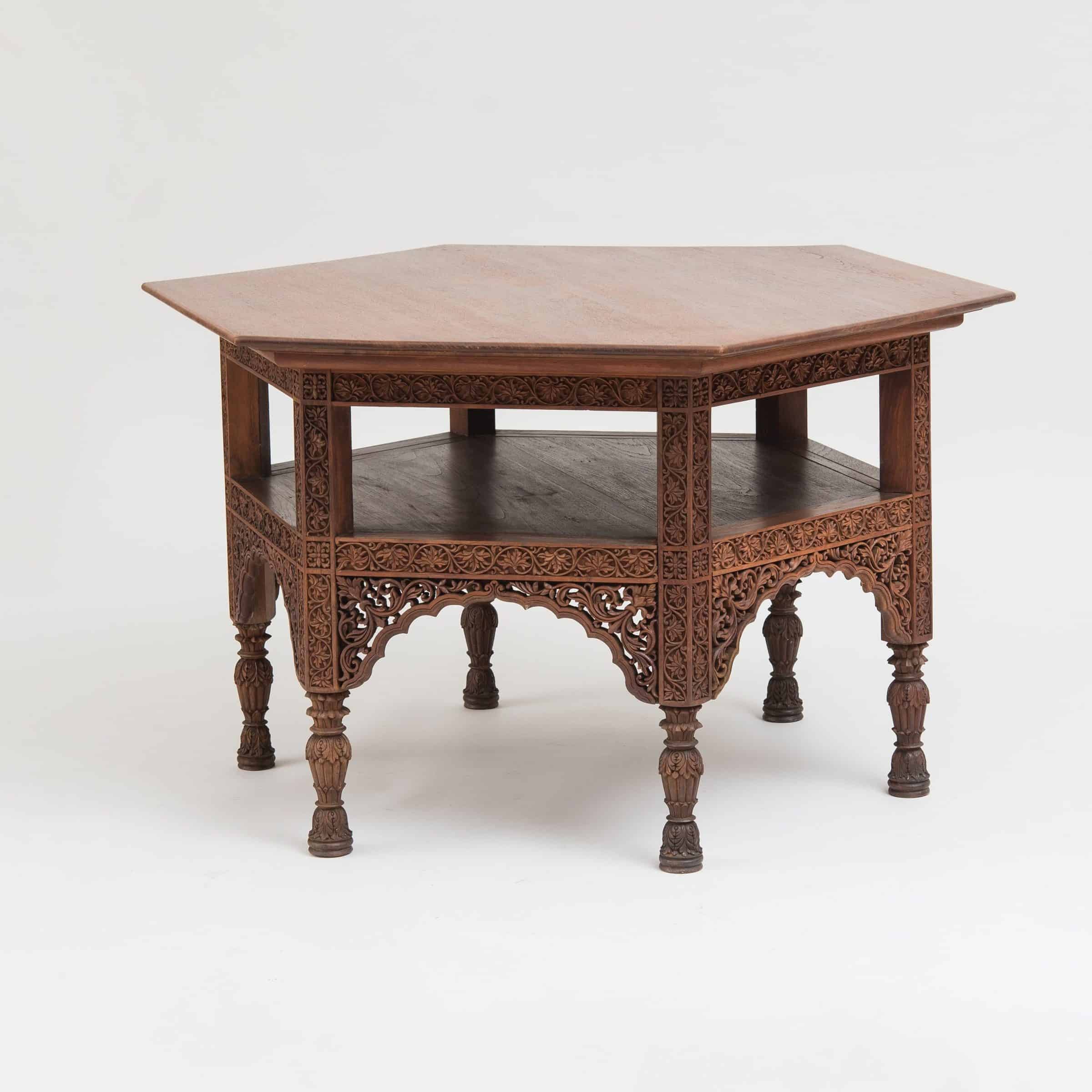 Inspired by the Indian Court at the Paris Universal Exposition of 1878, Lockwood de Forest made his first trip to India in 1881-82 to search out exotic goods for Tiffany. During this time, he established the Ahmedabad Wood Carving Company of Gujarat, India. After Tiffany’s partnership with de Forest was dissolved, de Forest assumed full responsibility for this Indian enterprise as part of his own business. De Forest offered decorating services for richly appointed “East Indian rooms” that featured hand-carved teakwood architectural elements and custom furniture imported from Ahmedabad, India. He also sold stock materials such as carved teakwood moldings, brackets, and panels to New York designers, as well as imported carpets, textiles, and exotic decorative objects from his extensive travels through India, Kashmir, and Egypt. Tiffany remained one of de Forest’s important clients and ultimately bought his business in 1908. This hexagonal table was similar to a piece in de Forest’s home. 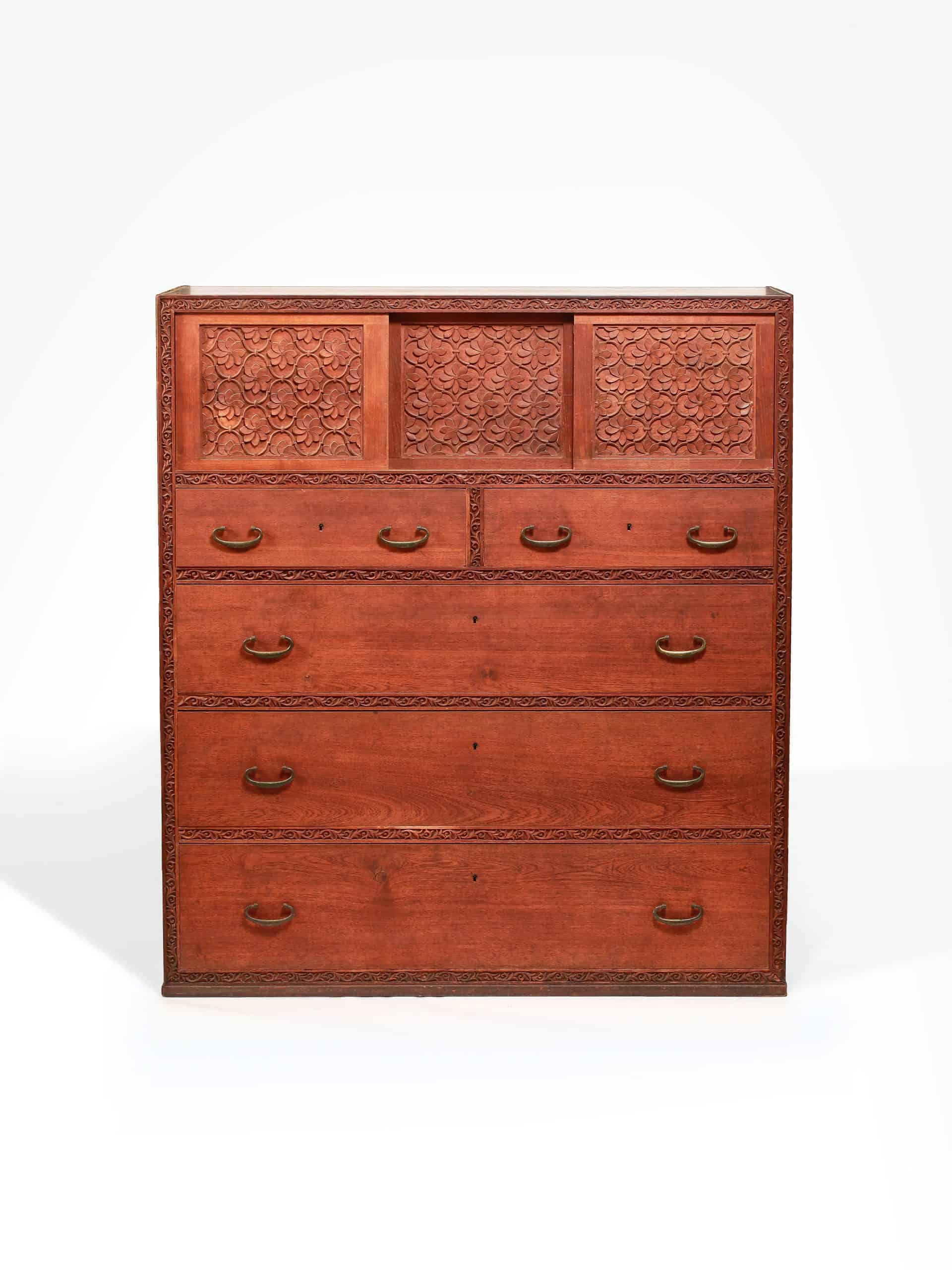 This tansu chest is a traditional Japanese furniture form that de Forest reimagined in carved Indian teakwood, and so it displays the confluence of design ideas from both Near and the Far East. The chest was in de Forest’s Tenth Street home. 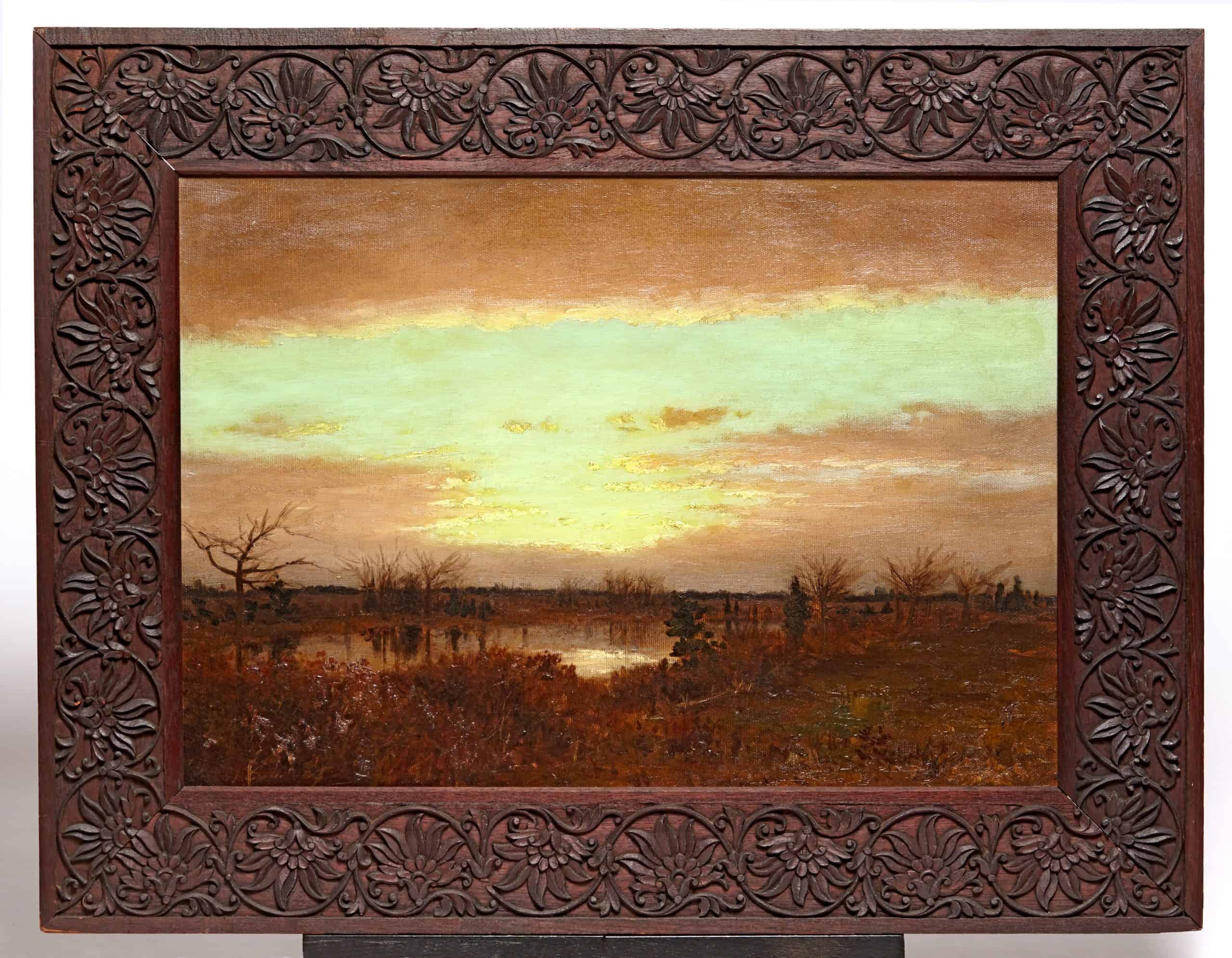 Life Tiffany de Forest remained an active painter. De Forest, who was trained by Frederic Edwin Church, was elected an associate of the National Academy of Design in 1891 and a full academician in 1898. 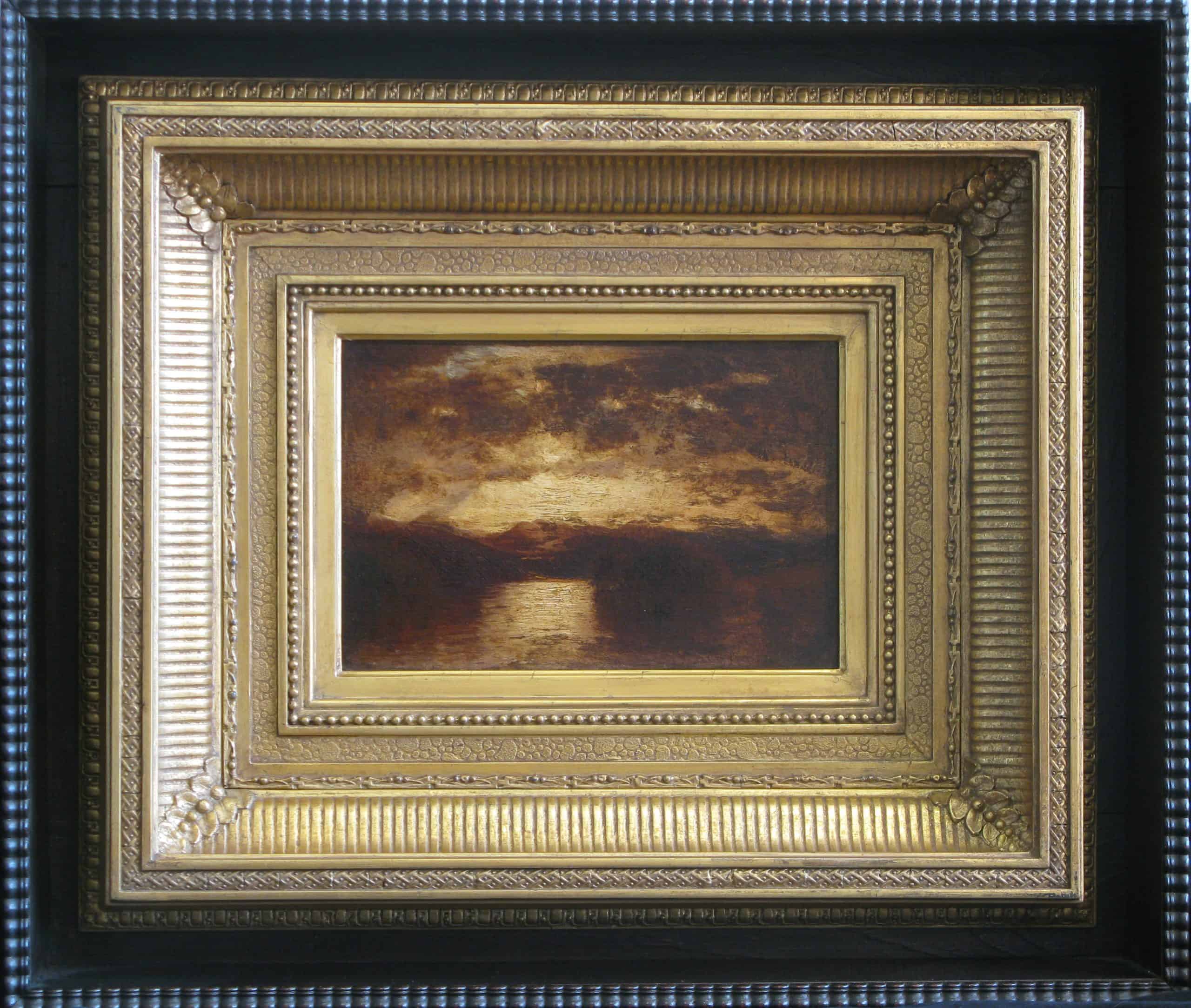 Colman remained an active painter throughout his career and like de Forest, Colman captured a dramatic sunset in the tradition of artists such as Frederic Edwin Church. 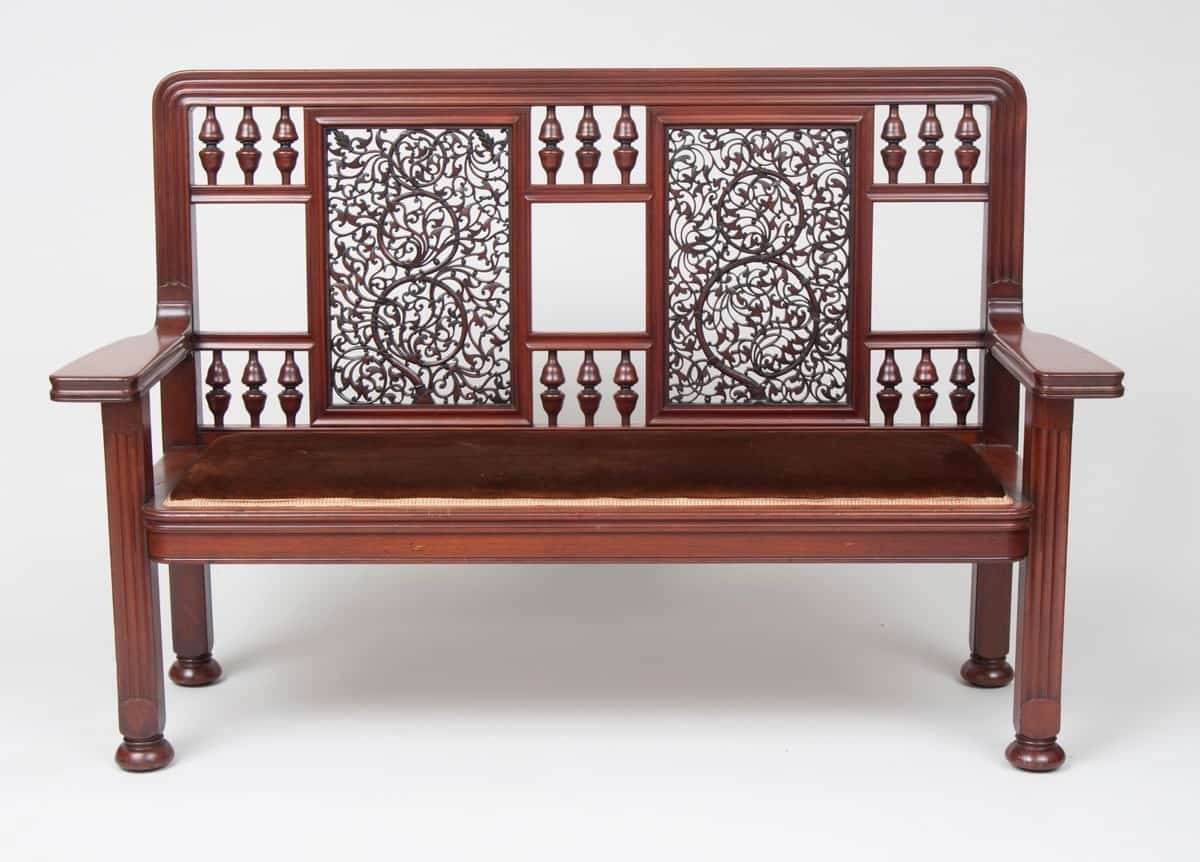 In the 1870s and 1880s, firms that had traditionally been purveyors of furniture, upholstery, or other interior furnishings started to work increasingly as full-fledged interior designers. These firms both competed against and collaborated with each other. This bench represents such a collaboration, with the mahogany frame being made by the Herter Brothers and inset with carved teakwood traceries manufactured by the Ahmedabad Wood Carving Company under the direction of Lockwood de Forest. 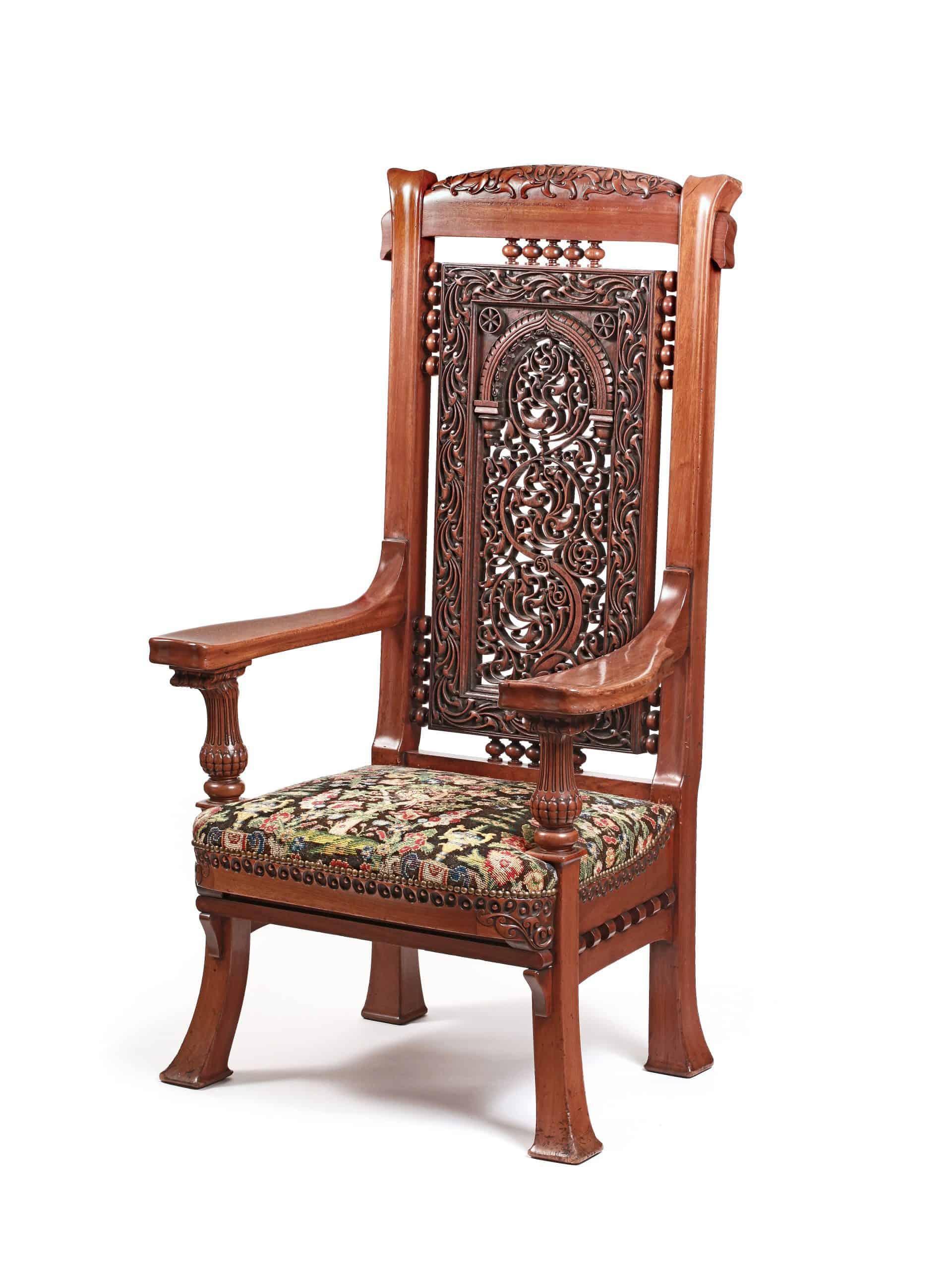 This impressive armchair, another example of collaboration, combines a frame by Tiffany with a reticulated panel from de Forest. The piece combines Japanese influences as displayed in the floral carvings on the crest rail with work produced in the Indian subcontinent. 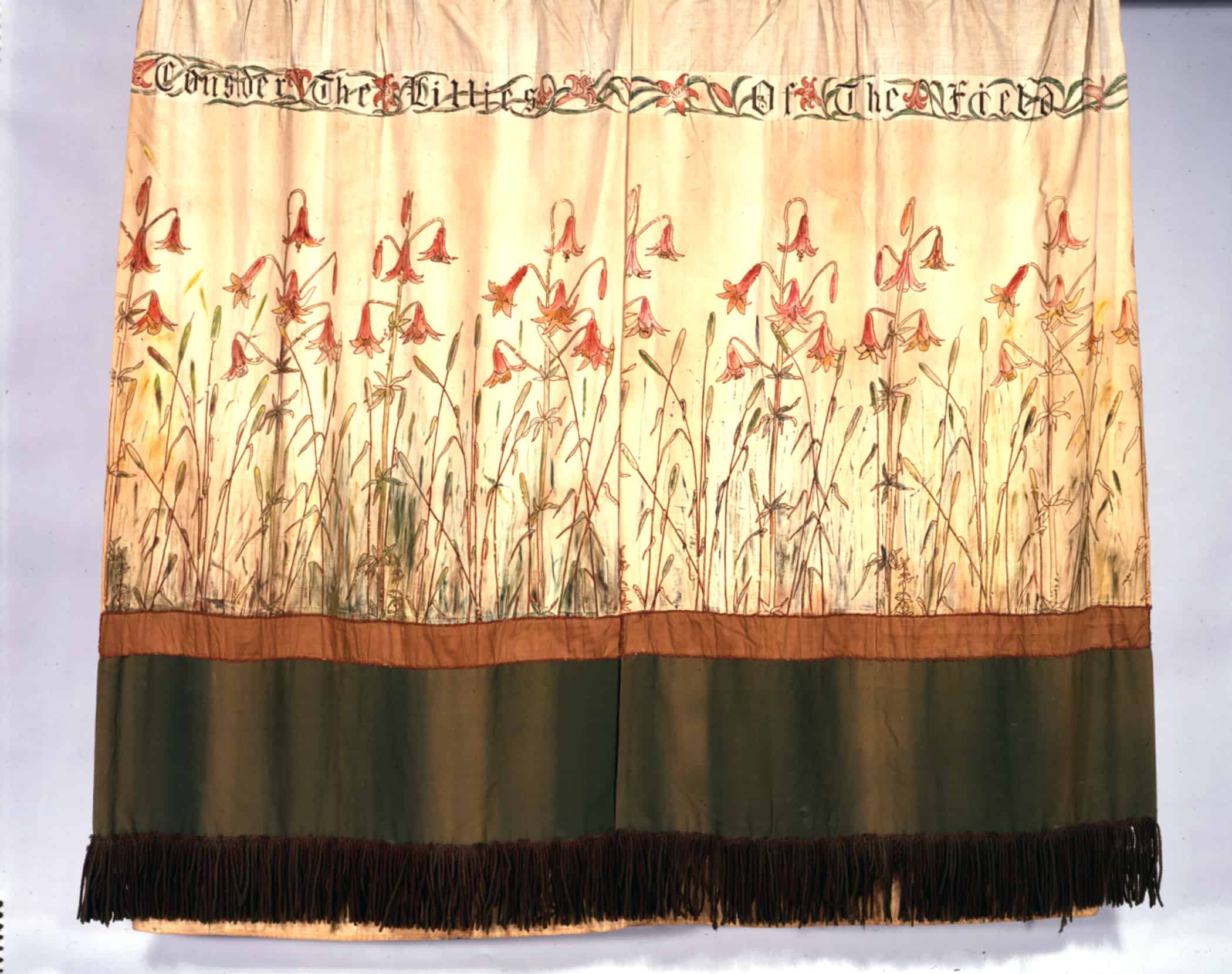 A rare early work by Candace Wheeler when she was helping direct the Society of Decorative Art in New York, these door curtains show the influence of the English Aesthetic and Arts and Crafts movements. Wheeler was particularly influenced by the production of the Royal School of Art Needlework, which she had seen at the British Pavilion during the 1876 Centennial Exhibition in Philadelphia. 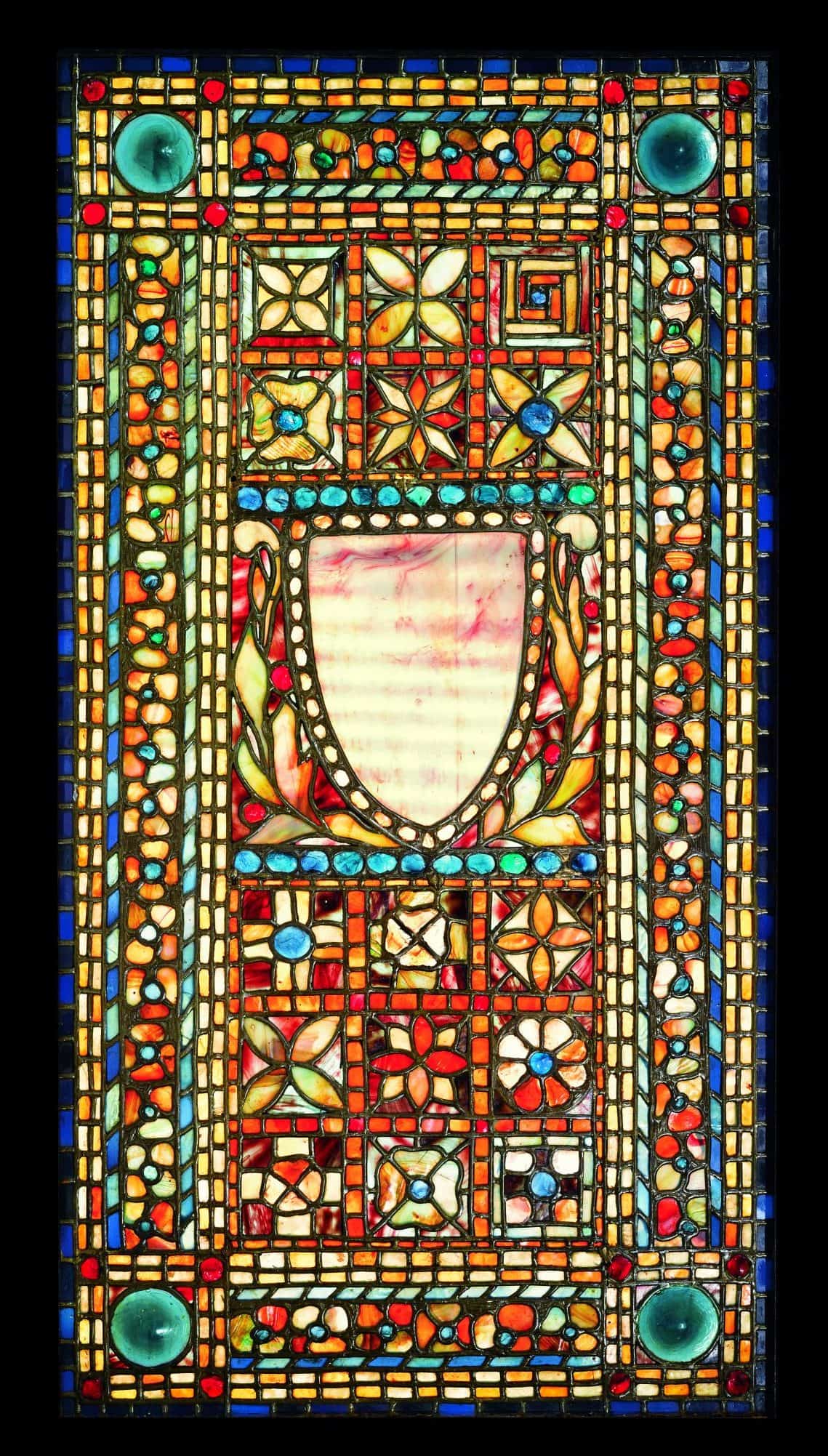 One of a pair, this window can be seen in the black and white photograph of the William S. Kimball House library that appears in Artistic Houses (1883-84), a prestigious, limited edition serial publication that showcased the most fashionable interiors of the Gilded Age. The Kimball window is an excellent example of Tiffany’s early experimentation with leaded glass during the era of Louis C. Tiffany & Company, Associated Artists.

Around 1882, the Herter Brothers were hired for an extensive redecoration of the Lyndhurst parlor. Christian Herter introduced a number of decorative features to refresh the outdated Gothic style of Alexander Jackson Davis’ surviving architecture. The stained glass bay windows were covered on the interior with a combination of portieres and impressive stained glass transoms held in mahogany frames that matched the new mantel mirrors. These transom windows bear a close relationship to work being done at the time by John LaFarge and the decorating company he founded although no records exist to provide definitive proof. These designs are clearly influenced by LaFarge’s Orientalist-inspired vocabulary, and elements of the stained glass are typical of those used by LaFarge at the time.