Although largely forgotten today, Helen Gould was once one of the best known and most beloved philanthropists of her time. Gould wrote a check to the United States government to underwrite the Spanish-American War and was generally associated with building YMCAs near military bases to provide wholesome recreation and enrichment for soldiers. She was heavily involved in women’s economic empowerment, building a vocational school to teach sewing at Lyndhurst, and was deeply influenced by her older friend, Mrs. Russell Sage, in her pursuit of women’s issues. As noted earlier, Gould attended both Episcopal and Presbyterian services and was particularly active in the Presbyterian Church.

Surprising to many, Helen Gould received her earliest training in charitable giving from her father, notorious for his predatory practices on Wall Street. The elder Gould did not publicize his many charitable activities as he suspected that the public would have seen these as a weak attempt to whitewash his reputation. Jay Gould purchased the viewshed across from George Washington’s home Mount Vernon (and then donated the property to the institution) and had his children select a charity to anonymously receive Gould funds each week. These habits stayed with Helen.

Her first charitable endeavor in 1894 involved fulfilling the promise to her late father to rebuild the Dutch Reformed Church in Roxbury, NY, and donate memorial windows by Tiffany Glass & Decorating Company dedicated to her parents. By this time, Helen Gould had at least a passing acquaintance with the Tiffany family through the Presbyterian Church in Irvington.

After the family memorial, Gould’s first public philanthropic endeavor seems to have been the funding of the New York University Library and Hall of Fame on the Bronx campus in 1898. Her father was involved with the university prior to his death, and Helen continued as the perfect patron, writing large checks and overseeing the project, but quibbling little with the work of the university or their designers. McKim, Mead & White, and Tiffany. The New York University Library is often considered Stanford White’s most successful building. Following her positive experience there, Helen Gould also funded the Tiffany decoration of the Irvington Public Library reading room in 1902.

For her personal pleasure, Gould purchased decorative glass, lamps, and windows from Tiffany Studios. A small window in the State Bedroom at Lyndhurst, dating to about 1908, seems to be the replacement of an earlier window that was destroyed by a tree. This pink and blue window is definitely attributed to Tiffany. Even more important, Gould commissioned Tiffany’s doe landscape window for her Fifth Avenue mansion, one of Tiffany’s most beautiful scenic windows and one of his largest residential works. Gould also acquired multiple vases, decorative works, and desk sets. A tantalizing entry in the 1942 sales catalog for the Fifth Avenue mansion is for a “gilded bronze table fountain, Tiffany Studios, diameter 20 1/4 inches.” The most important glass holdings were the Tiffany aquamarine goldfish and lily vases, considered among his most technically accomplished glass vases. 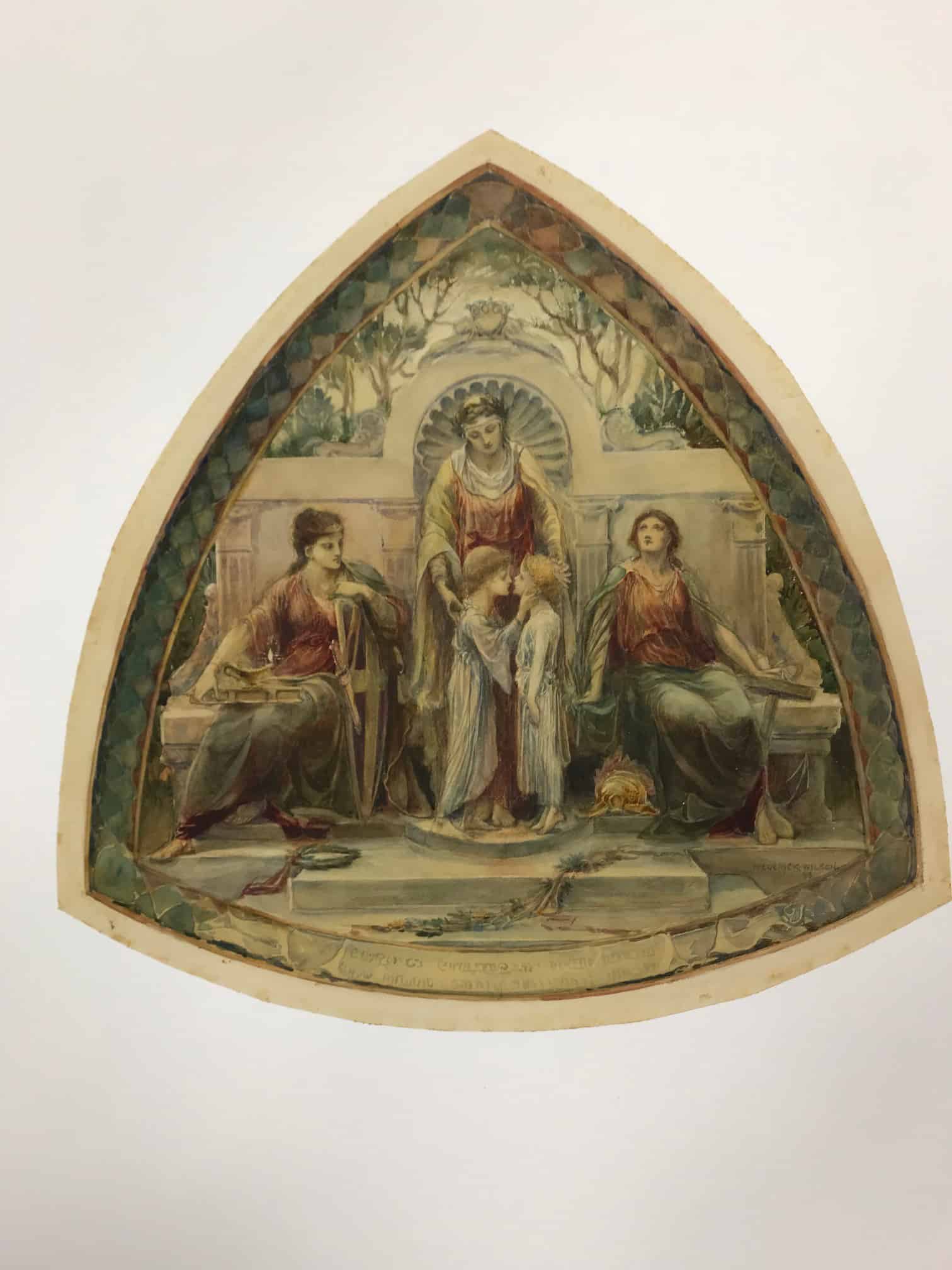 The Dutch Reformed Church in Roxbury, New York, Jay Gould’s birthplace, burned in 1891, and Jay Gould was approached to fund a new church edifice. Gould’s wife had died in 1889, and he may have offered to pay for the new church as a possible memorial to her. It is also believed that Jay Gould engaged Tiffany to start designing a memorial window for his wife based on his ideas, although there is no proof for this. After Jay Gould died in 1892, the payment for the church and commission of the windows fell to his children and was apparently taken up by Helen as the preparatory watercolors survive in the Lyndhurst collection. 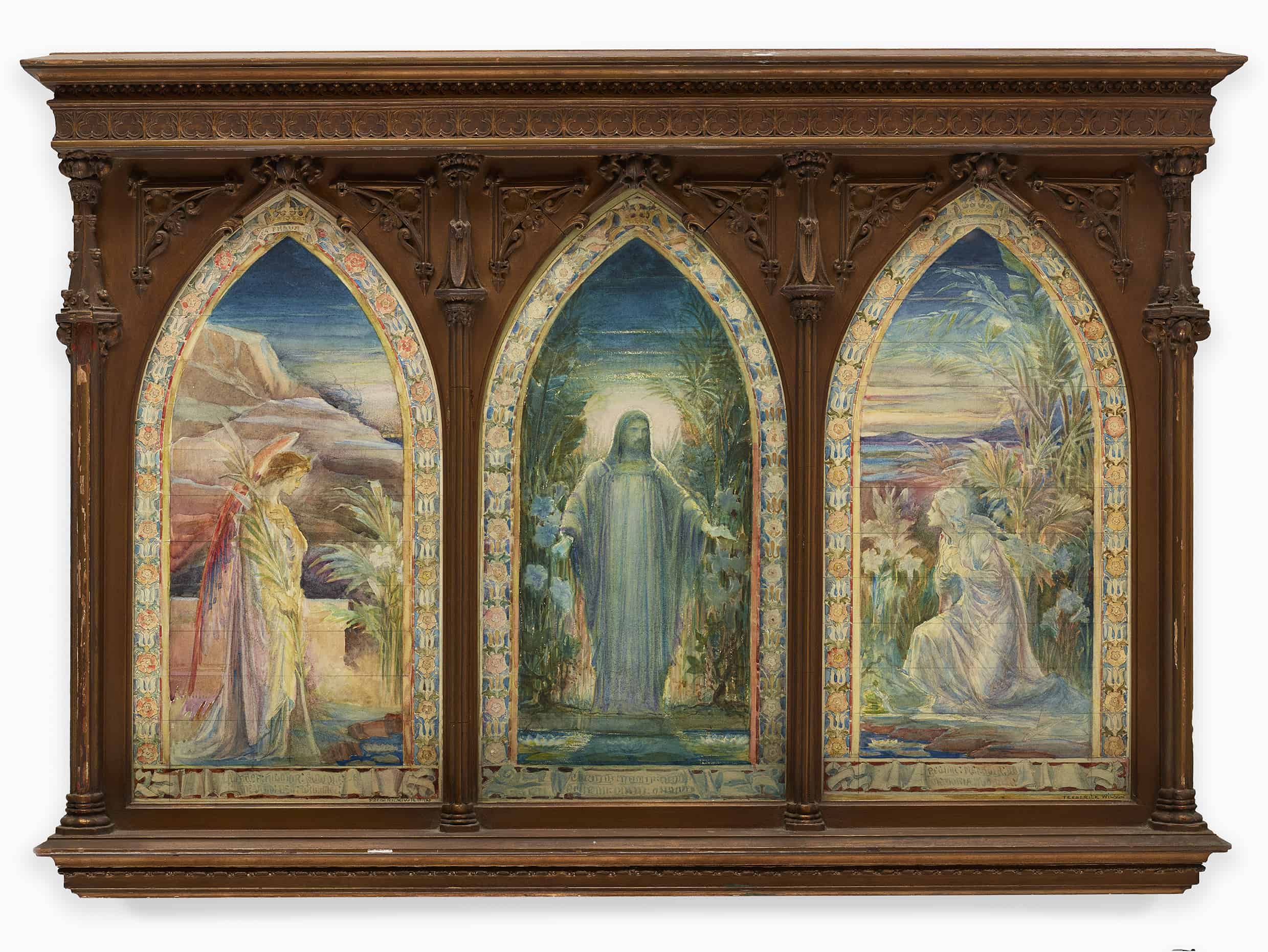 Frederick Wilson, the designer who standardized Tiffany’s ecclesiastical windows to the style widely recognized today, started to work with Tiffany around 1893 to 1894, making these some of his earliest designs for the Tiffany Glass & Decorating Company. 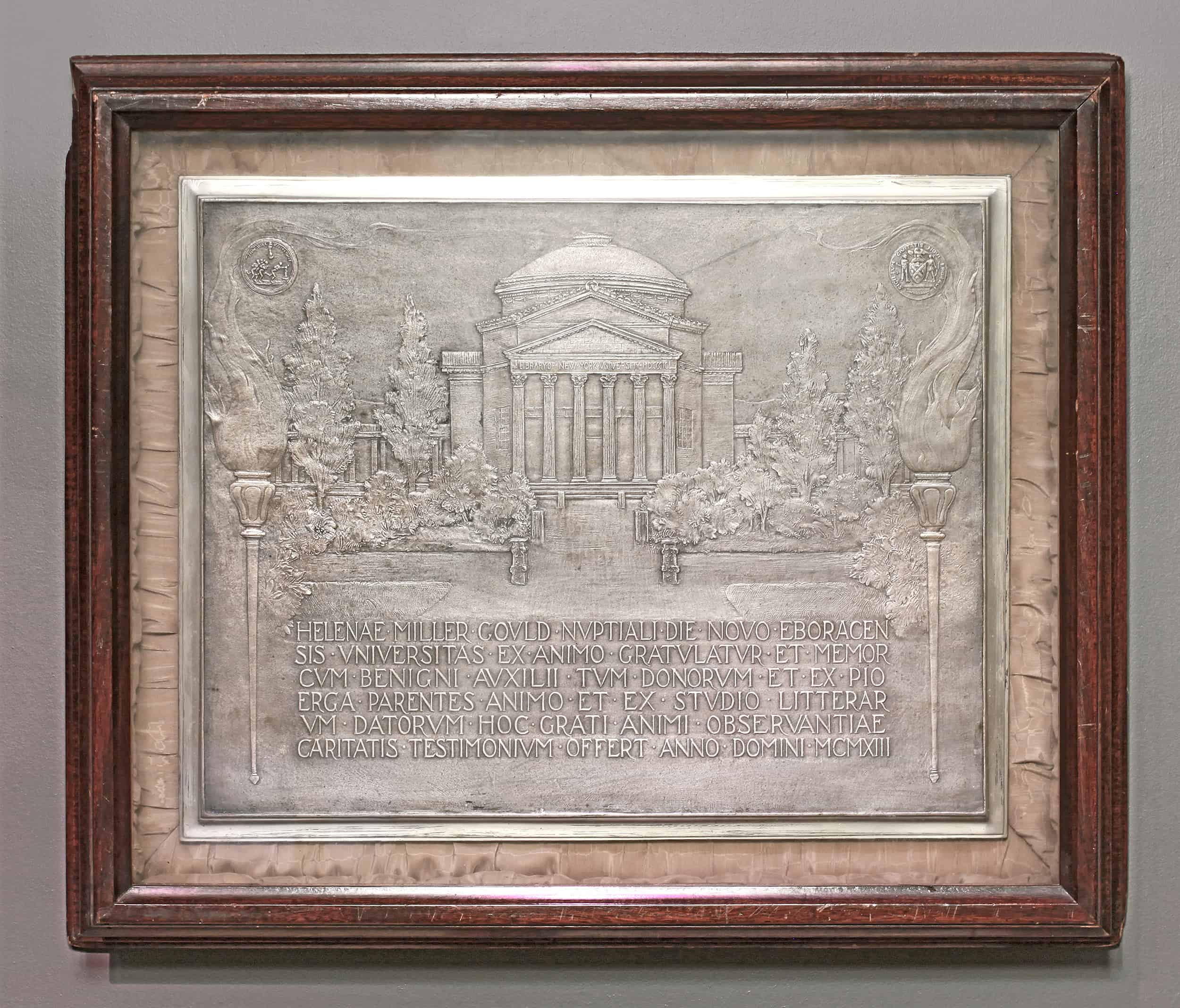 Helen Gould attended NYU Law School at a time when only two institutions in the country admitted women. Early on she decided to fund the New York University Library and Hall of Fame at their Bronx campus at a time when the university was struggling to grow. The building, designed by Stanford White of McKim, Mead & White and considered to be his masterpiece, included stained glass and interior finishes provided by Tiffany during the last years of the Tiffany Glass & Decorating Company and just prior to the founding of Tiffany Studios. Unfortunately in 1969, the most important Tiffany window in the library’s auditorium was destroyed in a bombing by Hispanic separatists then active in the Bronx. This plaque from the Lyndhurst collection was a wedding gift from the university to Helen Gould in 1913. Lyndhurst retains multiple gifts from charitable institutions that benefitted from her largesse. 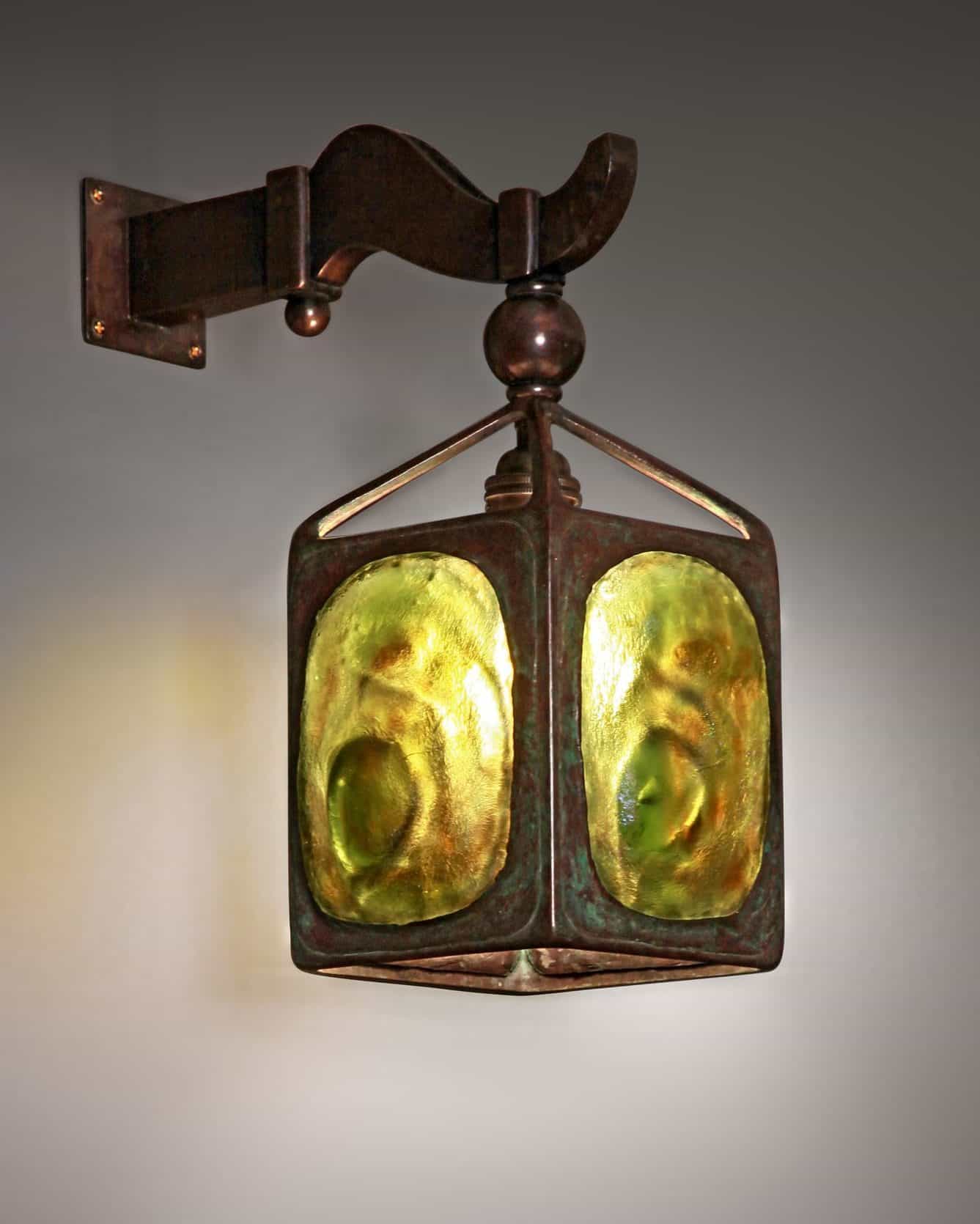 In 1902, Irvington opened its new Village Hall, including a public library with a reading room designed by Louis C. Tiffany. Tiffany Studios created a serene interior outfitted with broad woodwork that reflects Japanese aesthetic, rich mosaic panels around doors and windows, a mosaic clock, and oak furniture and shelving. Oak ceiling beams displayed literary quotations in gilt lettering. Lighting was provided by sconces and a chandelier of iridescent “turtleback” glass. This sconce, with its elaborate bronze arm, was likely from the second room of the library. Helen Gould paid $10,000 for the Tiffany decoration of the room and surviving records indicate that she did so after a satisfactory experience with “the younger Tiffany” in his work on the New York University Library. As Louis C. Tiffany was older than Helen Gould, the age reference was meant to distinguish him from his father Charles, the founder of Tiffany & Company. 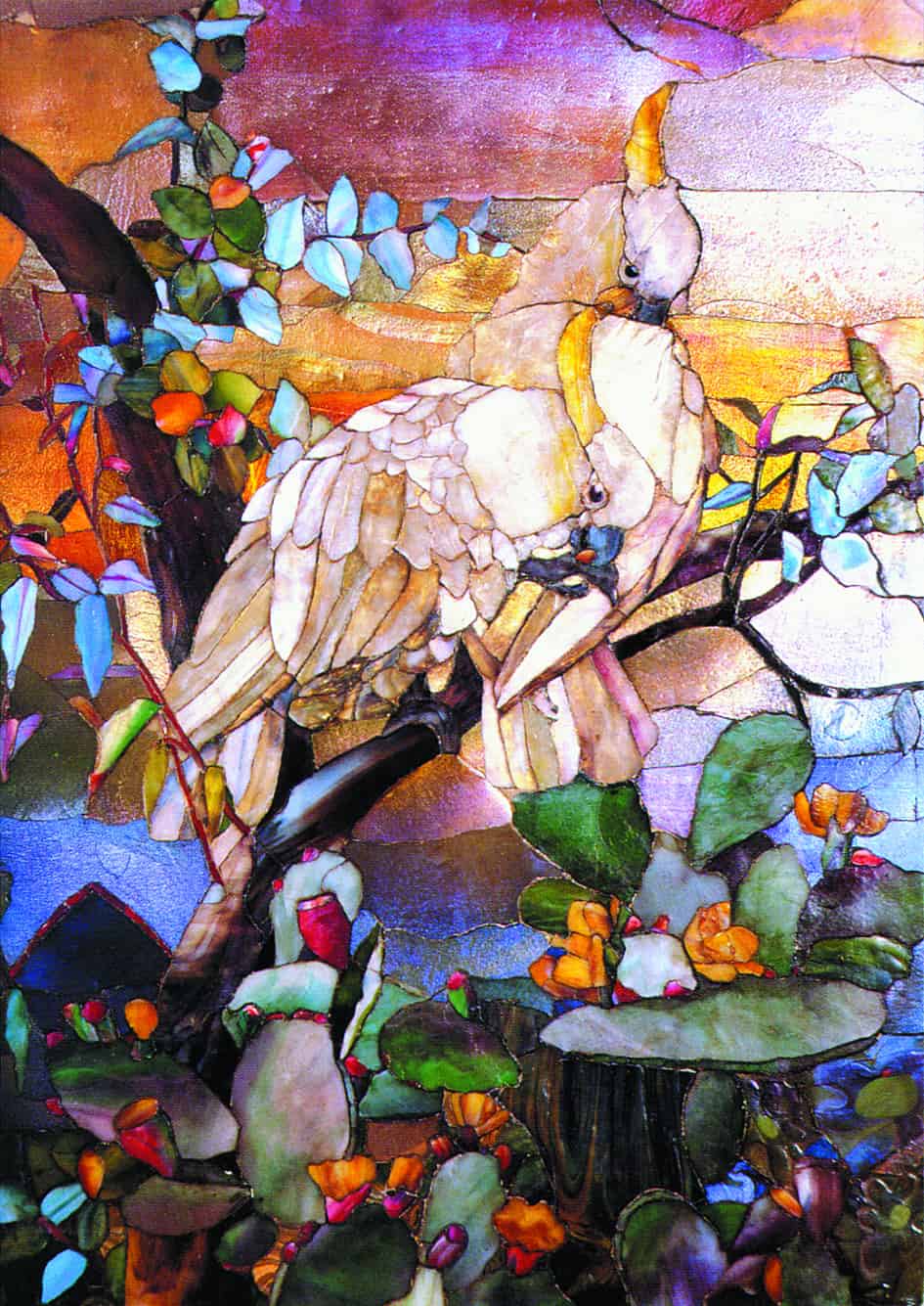 As exemplified by the Irvington Library reading room, Tiffany also worked extensively in mosaics made from shimmering favrile glass tesserae. This unusual shimmering mosaic panel, which may have had a Japanese design source, was likely made by mosaic workshop foreman Joseph Briggs for the Alaska-Yukon-Pacific Exposition in Seattle in 1909. 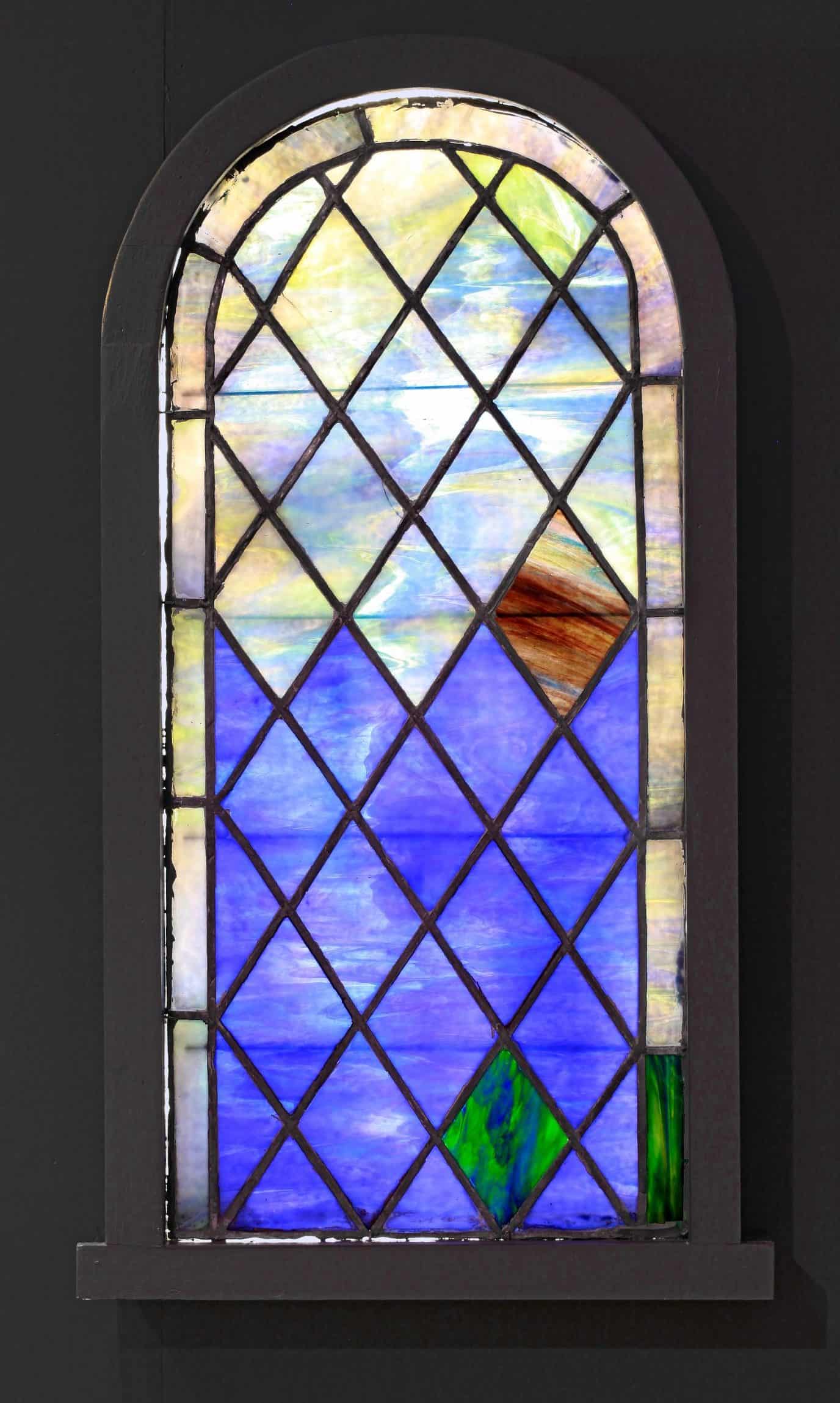 Jay Gould donated land to both the Episcopal and Presbyterian churches in Irvington, which are next to each other. His wife had been Episcopalian and he was raised in the Dutch Reformed Church, a Presbyterian Church affiliate. Although Helen Gould regularly attended both churches, she was more active in the Presbyterian Church, which was also attended by the Tiffany family. When he was in his sixties, Tiffany donated a suite of windows to the Presbyterian church, completely filling the interior with non-representational blue favrile glass windows. This scheme may show a certain level of modernism, in keeping with the shimmering sensibility of Monet’s late paintings of waterlilies. A second plausible explanation is that always the businessman, Tiffany wanted to provide an impressive donation to his boyhood church while minimizing the cost.