On View May 26th through September 26th, 2022: The exhibition is now closed. Catalogs are available from our Museum Gift Shop!

The exhibition will be on view in our exhibition gallery located in the Welcome Center complex and also in the historic mansion. You can view Women’s Work in a few ways:

We also have special events this year relating to the exhibition that you can participate in! Read more about those HERE. 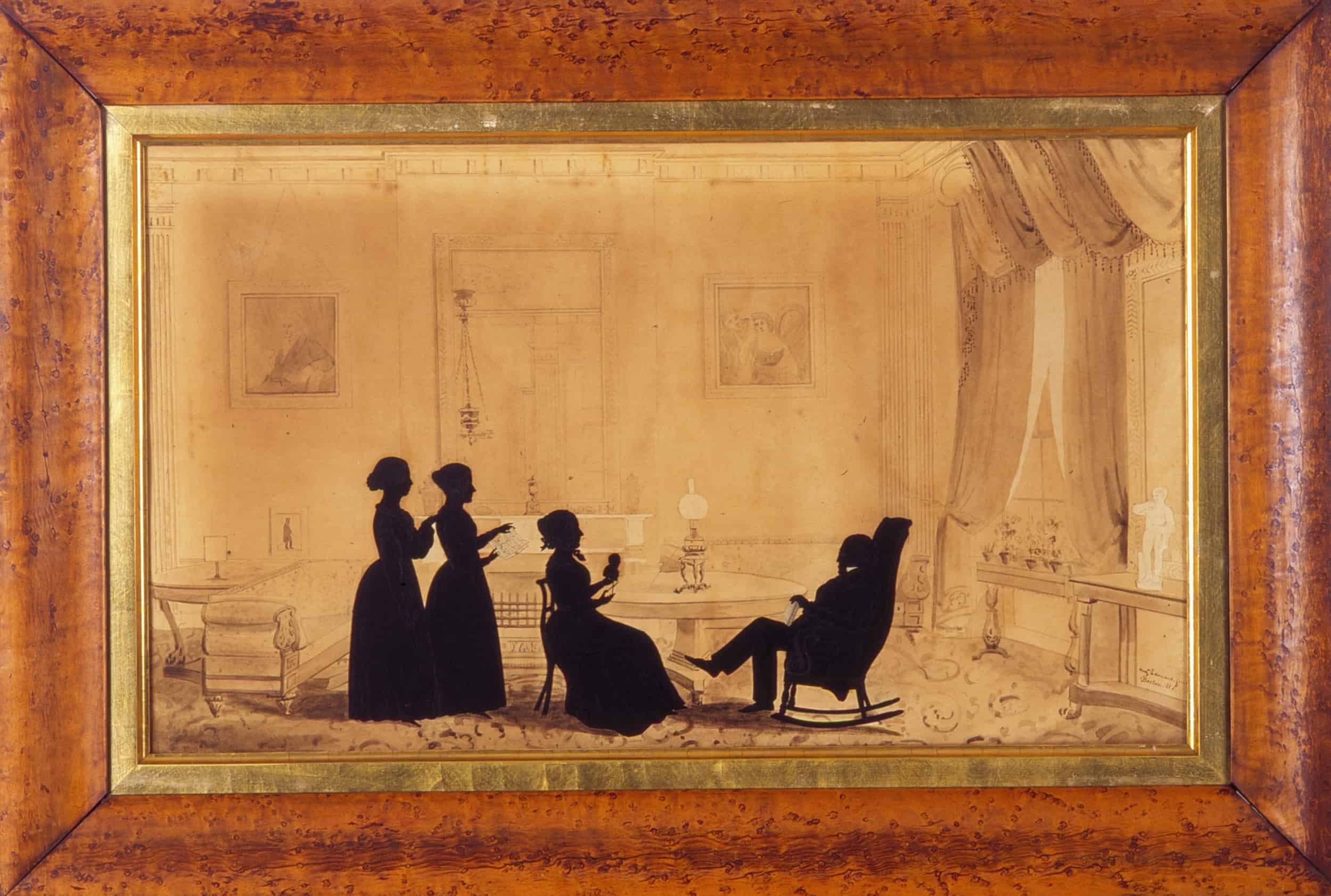 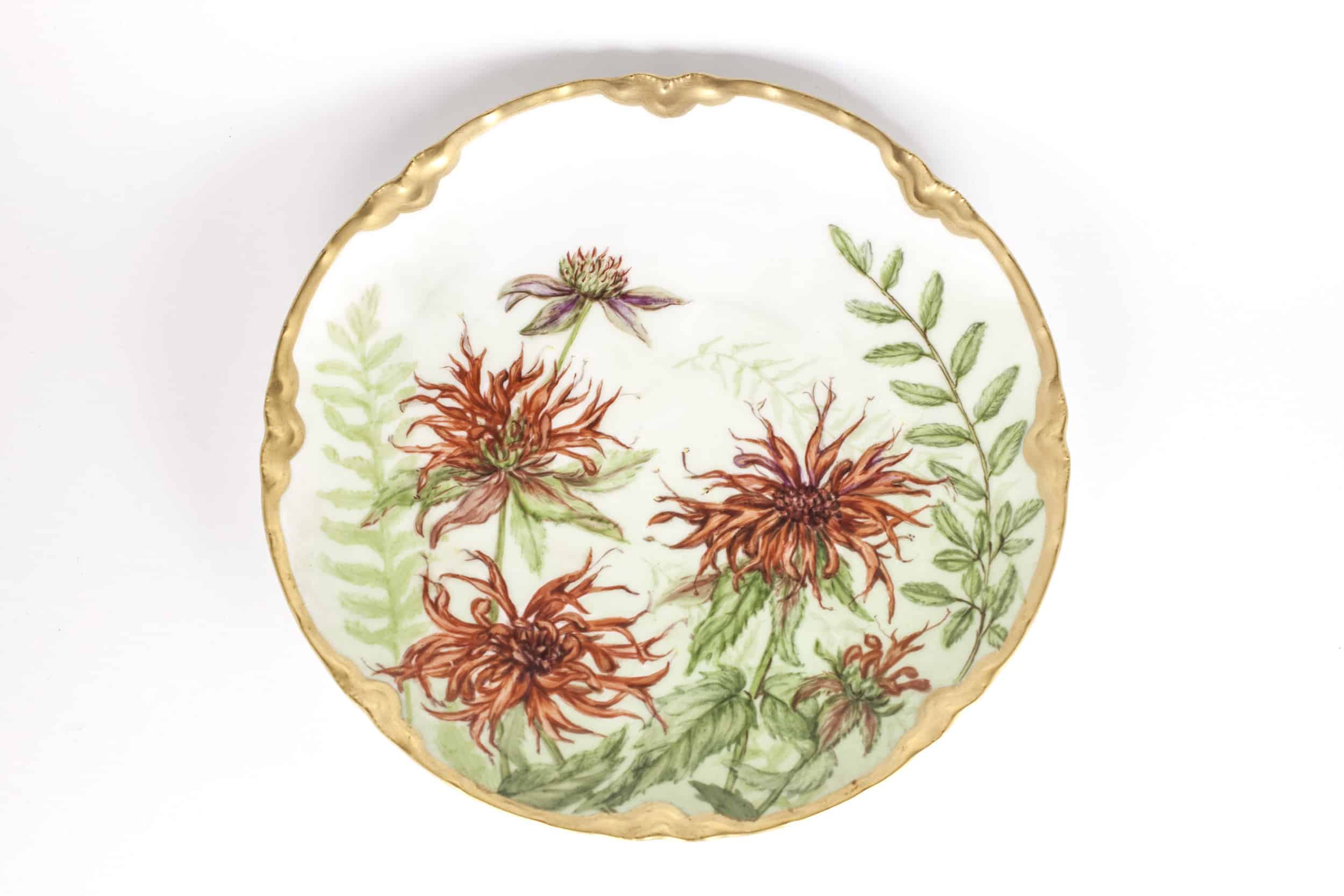 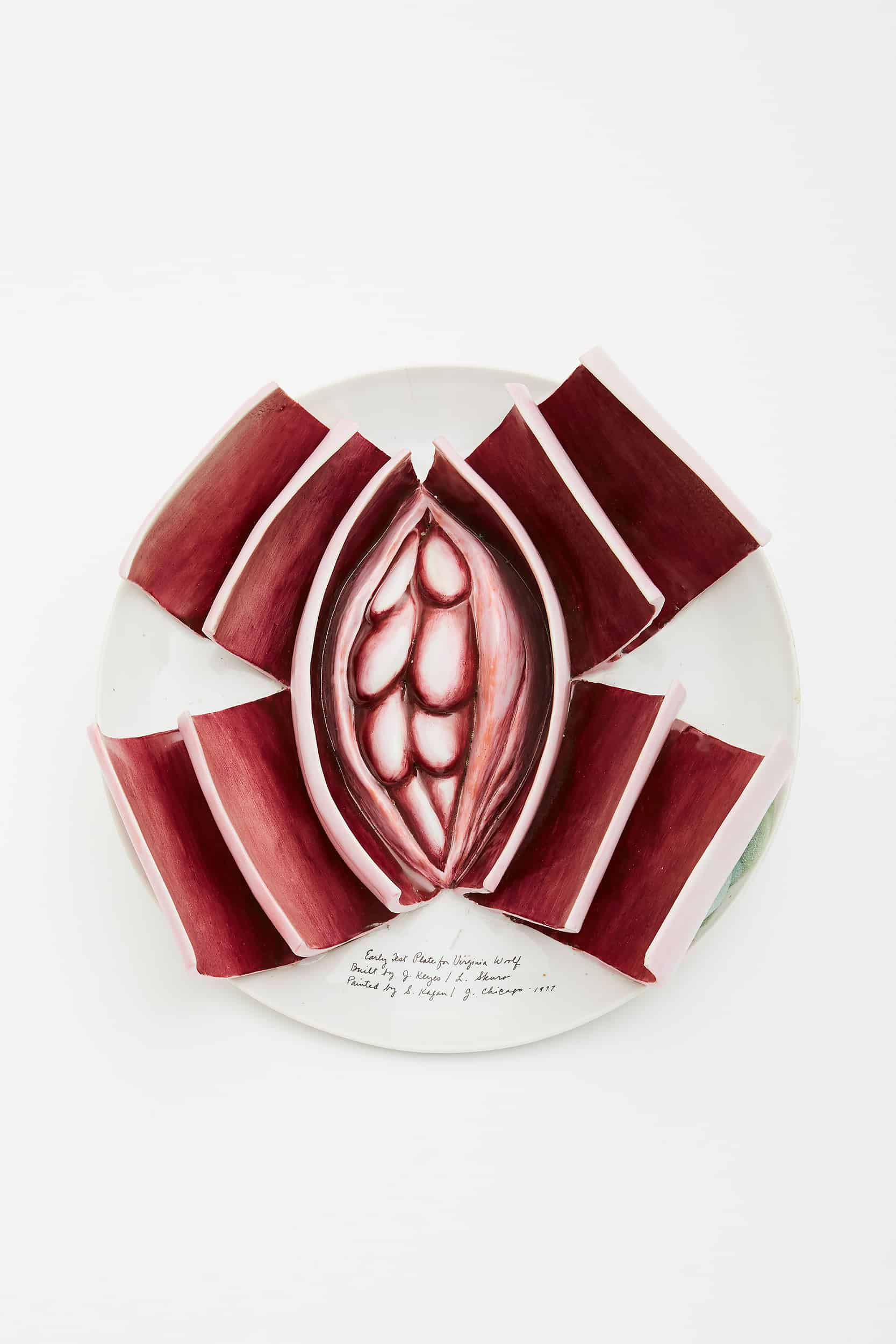 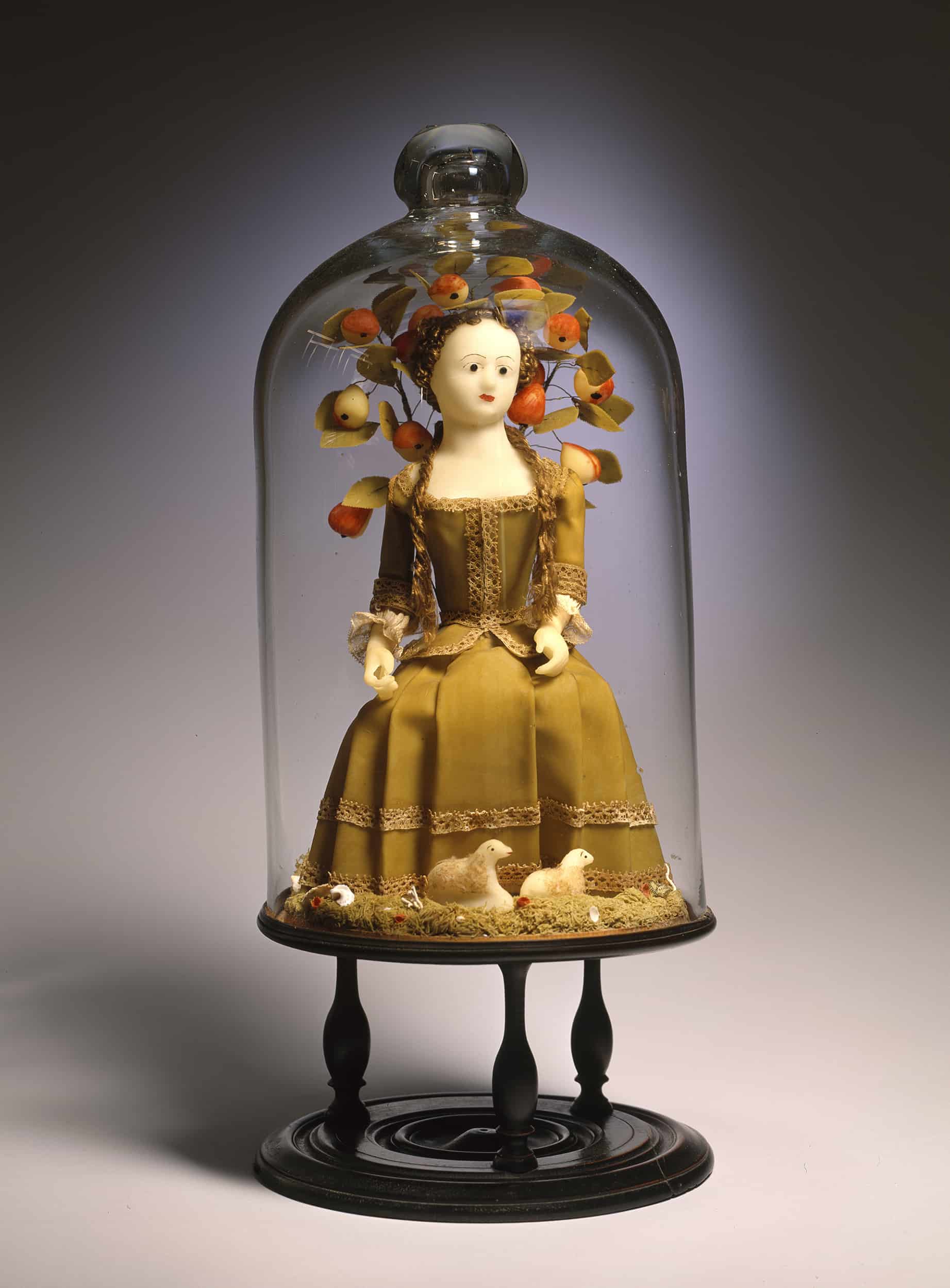 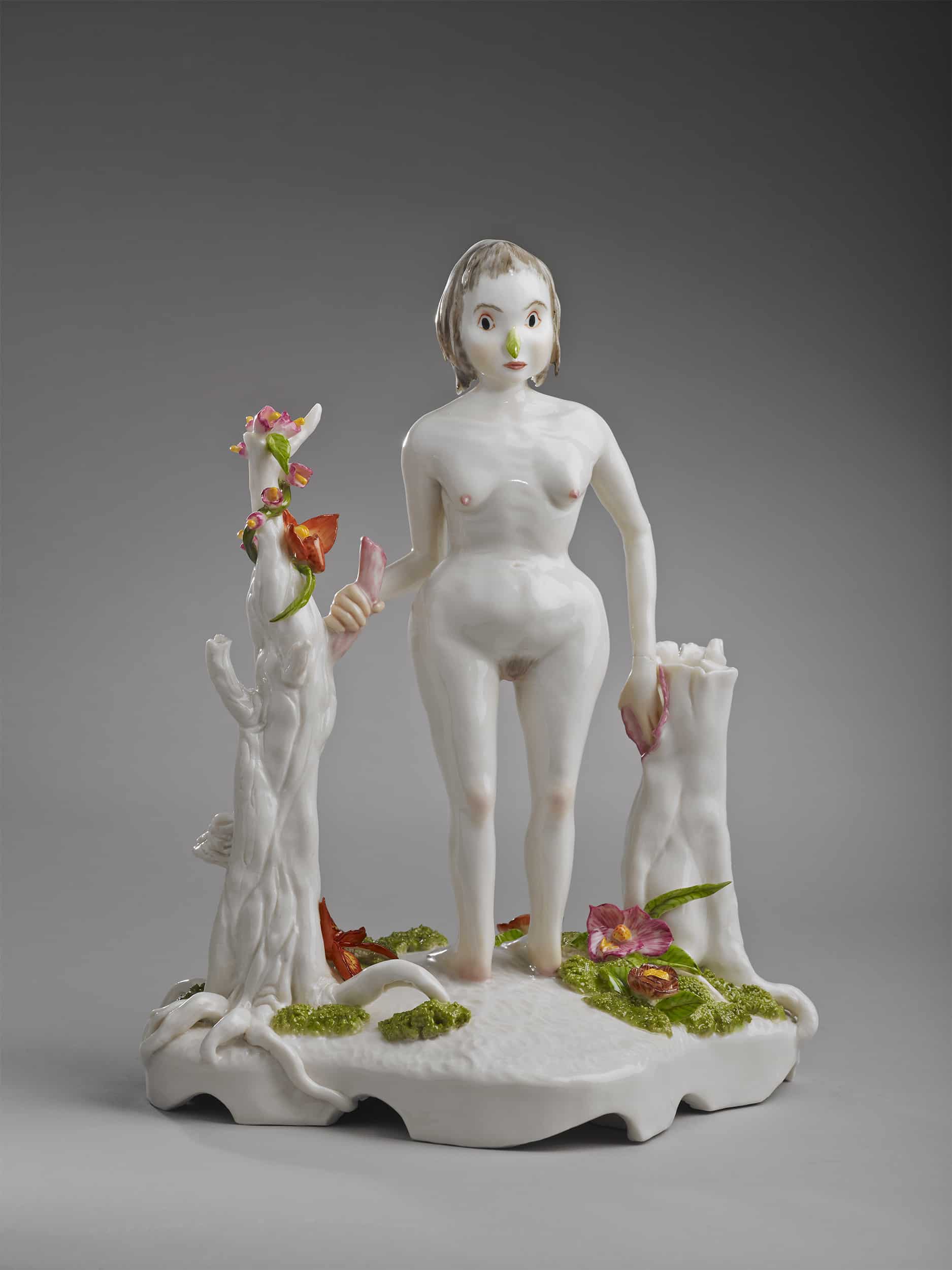 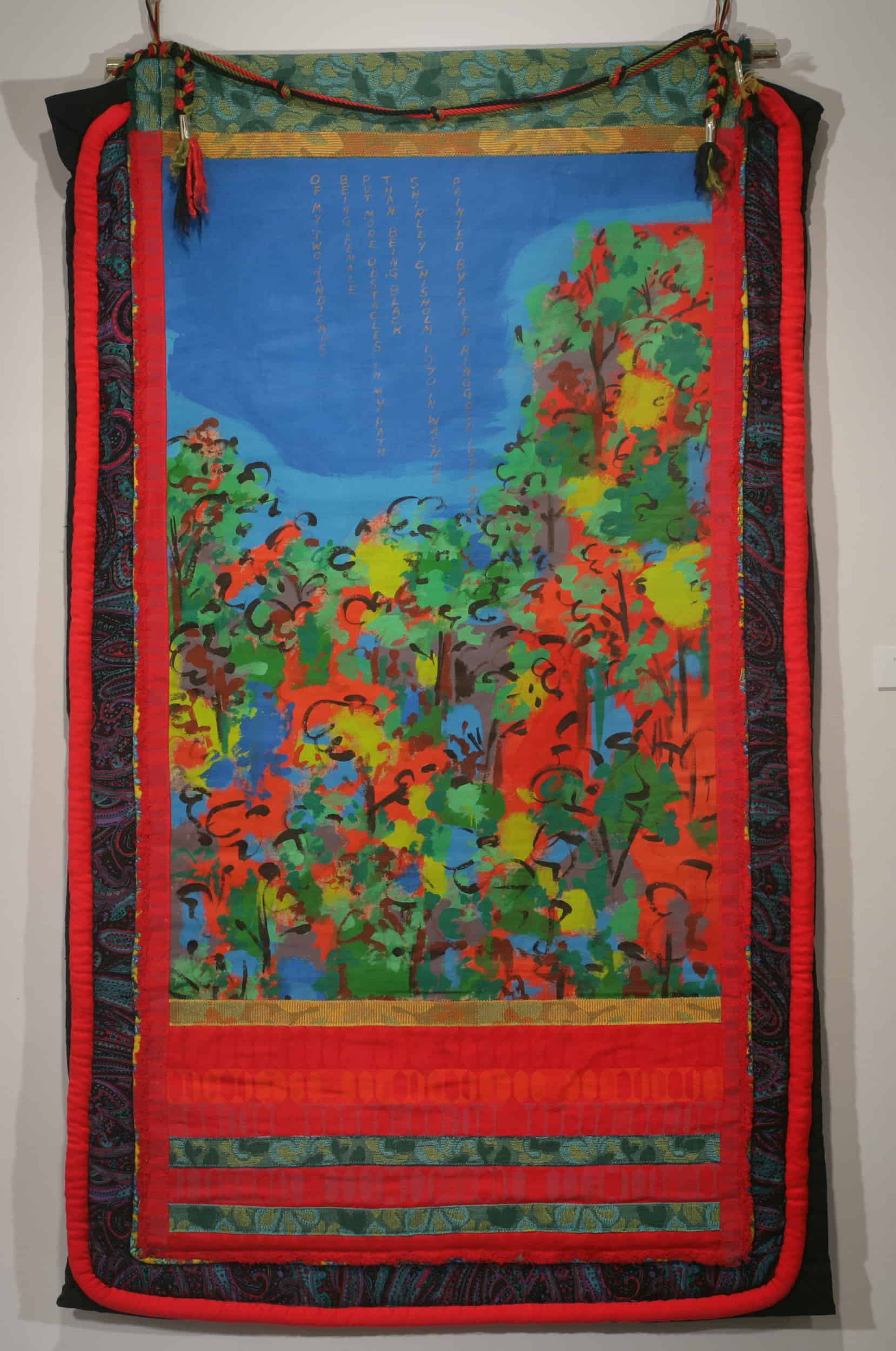 ‘Women’s Work’ seeks to establish the influence of handwork tradition through the work of contemporary women artists. Placing examples of traditional women’s work in conversation with the contemporary art that was directly influenced by this tradition, allows us to establish the pervasiveness of the traditional influence among contemporary artists and show the broad diversity of traditional handcraft mediums. Observing these objects side-by-side allows viewers to re-evaluate these historic works and understand them as the art objects they were always intended to be.

Starting in Lyndhurst’s entry hall, visitors will see a large historic woven wool flower wreath beneath a pictorial mandala by artist Portia Munson. Nearby will be a historic arrangement of delicate silk flowers under a glass dome. In Lyndhurst’s 1840s parlor, a side table will display a bowl of beaded fruit, with the center niche table featuring the large and outsized bead and semi-precious stone-encrusted rotting lemon by contemporary artist Kathleen Ryan. A large wax arm and flower sculpture by Valerie Hammond rests nearby. The reception room features works by Jenny Holzer and historic beaded cushions from Historic New England.

In Lyndhurst’s library, a 19th-century silhouette painting depicting women gaily cutting black-paper silhouettes in a well-appointed room will be hung above a black paper silhouette pop-up book by Kara Walker interpreting the experience of the enslaved. With these is a silhouette-inspired drawing by noted pop artist Idelle Weber depicting women encountering the glass ceiling and a silhouetted drawing of petroglyphs by Jaune Quick-to-See Smith. A 19th-century hair wreath, memorializing the hair of deceased family members, will be displayed with hair sculptures made by contemporary artist Nafis White from braided hair extensions used by Black women and secured with bobby pins. Lyndhurst’s cabinet room features contemporary terrariums by artist Paula Hayes. The dining room will include a tureen by Cindy Sherman decorated with an image of the artist disguised as Madame de Pompadour next to the 19th century of hand-painted cups and saucers from Lyndhurst’s collection depicting the image of French aristocrats. The table set is rounded out with the hand-painted work Rhunhattan by Beatrice Glow. Nearby will be Maria Martinez, Julie Green, and Betty Woodman ceramics.

In a bedroom belonging to Lyndhurst’s last owner, Anna Gould, Duchess of Talleyrand, her large Vuitton traveling trunk is adorned with lingerie embroidered with rap lyrics by Zoe Buckman and a nightgown embroidered by Maira Kalman next to historic examples of needlework. In Lyndhurst’s grand picture gallery Patricia Cronin’s sculpture, Memorial to a Marriage, depicting her and her wife Deborah Kass in a sculptural style is featured on the center table. In the primary bedroom are beaded objects including works by Liza Lou. The State Bedroom features historic and modern versions of fabric dolls by Faith Ringgold and Kiki Smith. In another bedroom, flower paintings of orchids from the Lyndhurst greenhouse by 19th-century society floral painter Irma Komlosy are displayed with a cast silicone rubber floral painting, replete with insects and rot, by contemporary artist Jeanne Silverthorne, as well as a video by Los Angeles-based artist Cauleen Smith showing an African-American woman arranging flowers in the colors of women’s prison uniforms as prison trustees watch.

The exhibition is broadly representative, including 20th-century pioneers and household names, mid-and late-career artists who have toiled for years with varied levels of public recognition as well as new, young artists. While the exhibition focuses almost exclusively on American artists, it seeks to be largely inclusive of artists of diverse races, regions, sexualities, and religions. The adoption by women artists of the handcraft tradition had an extensive reach as the underlying economic need of women to carry the burden of unpaid domestic labor was universal across otherwise unbridgeable societal barriers.

Even more remarkably, the historic women exhibited are rarely anonymous. Virtually all the artists exhibited (although not all) can be identified, at a minimum, by name and date and more commonly by history, painted portrait, photograph, or Wikipedia page. Of note, work by two early First Ladies are included in this exhibition, a needlepoint cushion designed and executed by Martha Washington and an embroidered pin cushion made by tastemaker Dolley Madison. Madison’s pin cushion, made from scraps of embroidered dress fabric, is placed in conversation with a Louise Bourgeois head, also made from scraps of fabric. As much as possible, we chose historic pieces that had some documentable presence of the artist to dispel the myth that these works were always created by housewives in anonymity and to amplify that these works were always seen as important, valued, and saved.

One of the outcomes of the side-by-side display of historic and contemporary is the domestically-scaled size of many of the objects displayed. Unlike many exhibitions of contemporary art, in which outsized size is the norm, most of the pieces in this exhibit are small, personal, and relatable. The contemporary and historical pieces are often the same sizes. Perhaps this is also a reflection of the gendered spirit imbued in these pieces. Their domestically scaled size eschews a male emphasis on enormity that has become the norm for contemporary art.

The exhibition is also a mini-retrospective of the emergence of women artists in the 1960s and 1970s including important early examples of works by some of the feminist pioneers of the time. These include prototype plates for the Dinner Party series by Judy Chicago, Faith Ringgold soft sculptures from the 1970s, Yoko Ono’s film Cut Piece, Miriam Schapiro’s first fan painting, Harmony Hammond’s Bag VI from 1971, a variant of the Ford Foundation tapestry from 1967 by Sheila Hicks, and a Jenny Holzer Truisms LED designed in 1976.

We thank all of the artists, galleries, private collectors, and institutions who loaned us the objects for this exhibition.

The 2022 Lyndhurst season is presented by:

Women’s Work is presented jointly with Historic New England, which has provided artworks from the 18th and 19th centuries to be exhibited alongside contemporary works.

Curators’ Symposium: Nancy Carlisle, Rebecca Hart, and Howard Zar Provide an Inside Look at Women’s Work, a Special Exhibition at Lyndhurst (September 18 from 1:00 to 4:00 p.m. ET)

With more than 125 objects, Women’s Work explores the adoption of the domestic handicraft tradition by contemporary women artists by placing historic precedents next to contemporary examples.  Join the curatorial team for an inside look at this special exhibition profiled in the New York Times. Howard Zar, Lyndhurst’s Executive Director and a graduate of New York University’s Institute of Fine Arts, shares insights into the creation of this culturally diverse exhibition. Nancy Carlisle, a graduate of Winterthur and Senior Curator of Collections at Historic New England, highlights the history of domestic handcrafts through their surviving objects. Rebecca Hart, a Cranbrook graduate, and independent contemporary art curator will discuss the often difficult history of the adoption of historical techniques by contemporary women artists. The symposium will be held both in person at Lyndhurst and virtually.

You can watch the recording of the symposium HERE. 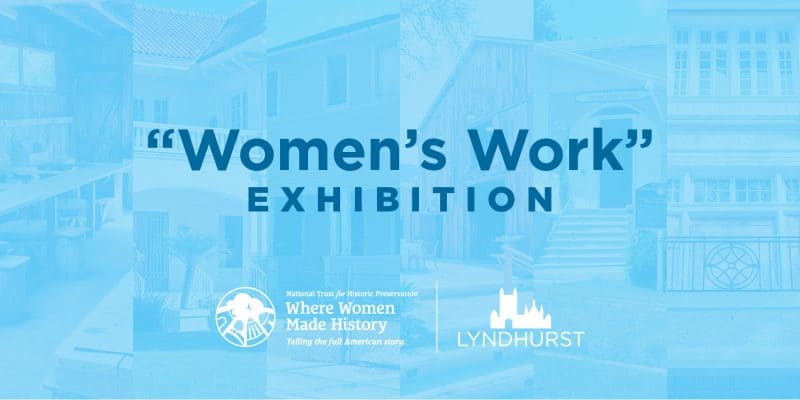 Virtual Events: Celebrating “Women’s Work”
There have always been great women artists—a fact that feminist art historians have continually and consistently reinforced over the past half-century. Using this summer’s new “Women’s Work” exhibition at Lyndhurst as a source of inspiration, these virtual events will delve into the complex history of women’s artistry; the growing recognition of the influence of women artists, feminist artists, and women artists of color on the art world; and the deep connections that exist between the production of art and the places where women created it.

These virtual events are brought to you by the National Trust for Historic Preservation’s Where Women Made History program in conjunction with the “Women’s Work” exhibition at Lyndhurst—a National Trust Historic Site. 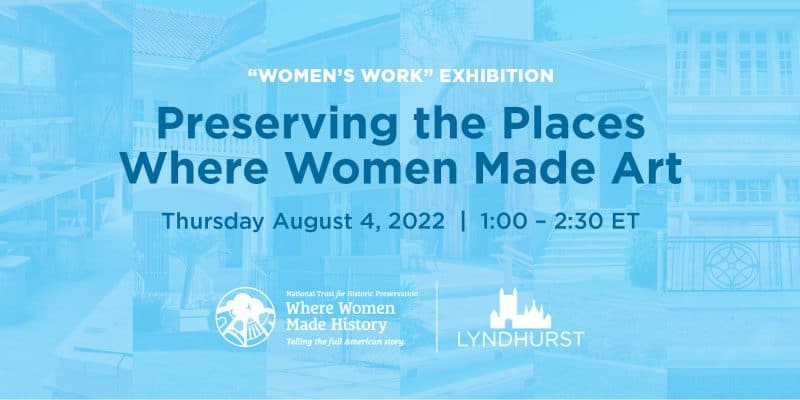 Preserving the Places Where Women Made Art (August 4 at 1:00 p.m. ET)
In this event, a panel of geographically, culturally, and thematically diverse places of women’s artistry and creativity will consider both “how” and “why” it is important to recognize and preserve these places where women made art. In doing so we’ll explore a range of approaches for tackling the challenges of preserving the place-based legacy of women artists, examine the manner in which the artists’ stories are presented to the public to bring women artists the recognition and respect they deserve, and how these historic places can continue to inspire education, activism, advocacy, and new artwork in their communities.

You can watch the recording of the August 4th event HERE.

How do contemporary women artists draw on personal histories and cultural heritage to create a unique body of work? Independent curator Rebecca Hart leads a panel discussion with three incredible artists who are featured in Lyndhurst’s “Women’s Work” exhibition. Beatrice Glow, Daisy Quezada Ureña, and Nafis M. White each use their artistic vision to address complex social and political issues that include migration, colonialization, gender and racial discrimination, and cultural identity.

Using a wide range of different media and sensory experiences, each artist explores identity, community, and the power of resilience in their vast body of work, community activism, and teaching. Rebecca Hart will engage these artists in conversation about their chosen methodologies and the ways in which they examine their role as artists within the historical context of artistic practice.

You can watch the recording of the September 7th event HERE. 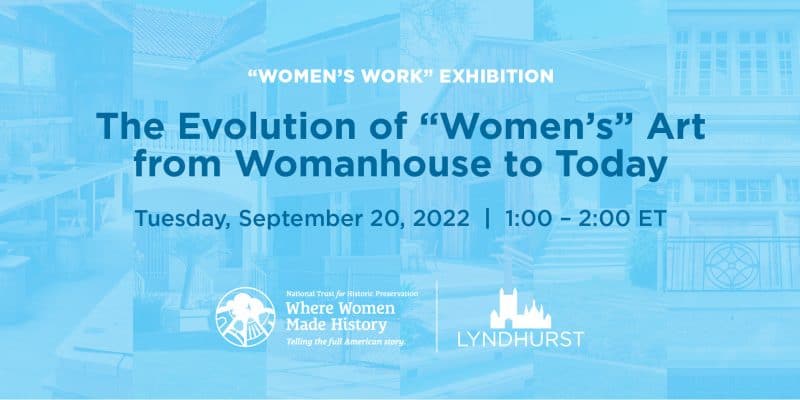 The Evolution of “Women’s” Art from Womanhouse to Today:  A Conversation with Lucy Lippard and Harmony Hammond (September 20 at 1:00 p.m. ET)
This spirited and wide-ranging conversation will delve into the evolution of the definition of “women artists” and “feminist artists,” beginning with the groundbreaking second-wave feminists who directly challenged the patriarchal art system in the 1960s and 1970s. Essential to this discussion are the many ways in which LGBTQ and women artists of color have problematized and broadened that early approach to directly address issues ranging from their own cultural and familial heritage, the fluidity of sexuality and identity, and the inherent inequities in the consumerism that drives the global art market. And in doing so, greatly changed our understanding of what it means to be a woman artist.

You can watch the recording of the September 20th event HERE.

The New York Times piece by Laurel Graeber about the “Women’s Work” exhibition, click the image to go to article:

The National Trust for Historic Preservation article by Priya Chhaya about “Women’s Work“, click the image to go to the article: 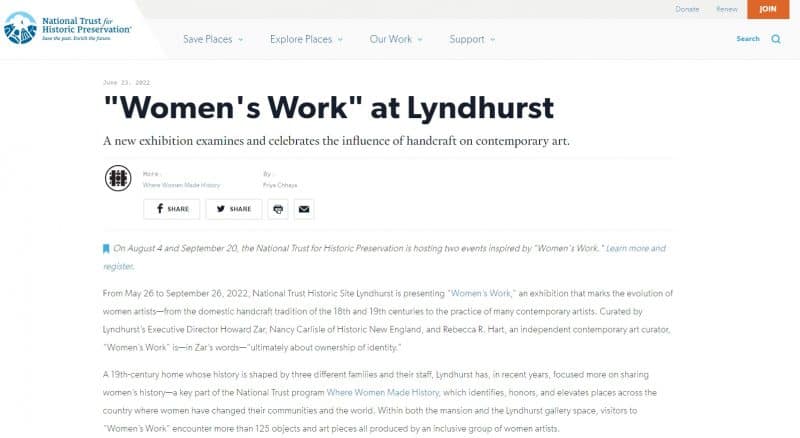 CBS Sunday Morning did a segment on ‘Women’s Work’ which aired on August 21st.  You can read about that and watch the segment by clicking the image below: 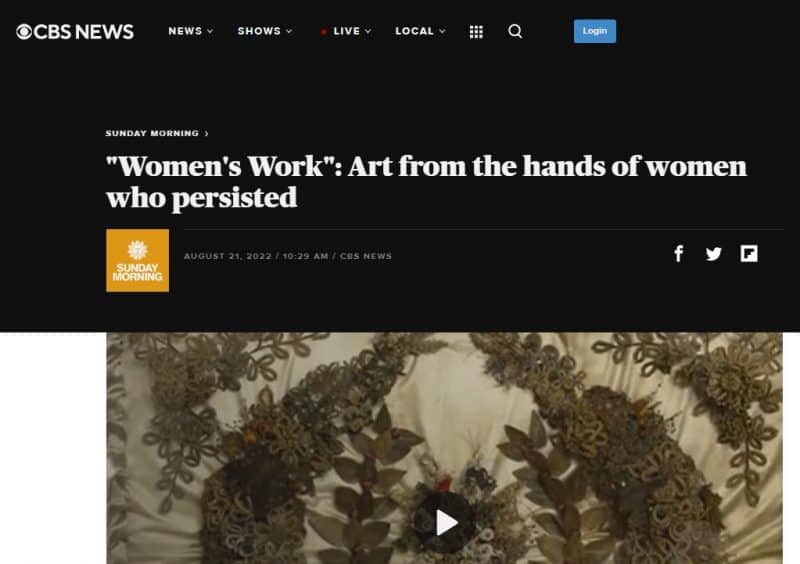 There are still exhibition catalogs available from our Museum Gift Shop! You can purchase on-site during your visit to Lyndhurst or speak to shop staff over the phone to buy a catalog and have it mailed to you. Please call: 914-303-6832. 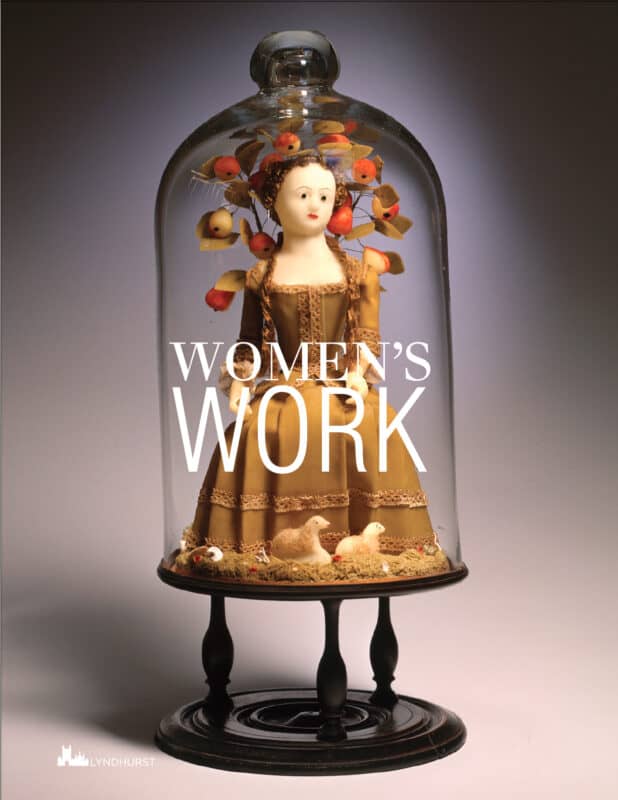